This is a story about cartridge pleating in the 18th century, specifically on fitted-back (robe a la anglaise) women’s gowns. About how I first did not know anything about it, and then learned about it not existing at the same time as seeing it for the first time. If that sounds contradictory: it is, which is the main reason I’m writing this post. (a hint to the conclusion: they do exist!)

Some pretty pictures to spark your interest (Kunstmuseum Den Haag)

First up: a little terminology! (feel free to skip to the picture of the blue damask dress if you already know all of this).

Cartridge pleating is specific way of gathering a width of fabric into a smaller area. Specifically, it involves:

A picture for clarity:

Where grey is the right side of the fabric, red are the gathering threads, and purple (last picture) the stitches attaching it to a waistband.

If you want to be sure a piece of fabric has been cartridge pleated, you need to check 3 things. 1, the raw edge is folded down, 2 there are at least two rows of gathering threads in place and 3, it is stitched to the other fabric not by pressing it flat, but pleat by pleat, keeping the width of the pleat. Of these, only the second one is always visible from the outside! But you can typically infer the others if the pleats ‘stand out’ and are not directional (so the ‘fold’ of the pleat is facing directly up in the middle), as this means they have not been flattened when sewn on, and this can only be avoided if you also have a folded over edge.

In my gold 1660’s dress you can see the finished result, with the threads peeking out between the folds.

What’s a robe a la Anglaise? The exact definition differs a bit (in French it’s used for any fitted-back gown), but in this article I’ll be using it to refer to 18th century women’s gowns who have folded pleats in the back which are stitched down and run into the skirt. The skirt of the gown is cut in one with the back, and then pleated down to fit to the other pieces of the body. In English terminology, this is also what you’d call an ‘English gown’.

In this example from the MET museum you can see the folded back, and how those panels run into the skirt (click on the picture to see their high-resolution photos) 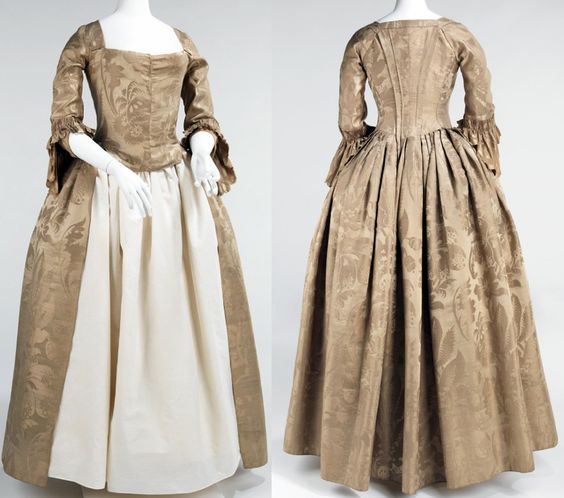 And now, on with the story!

The first time I saw cartridge pleats 0n an Anglaise was in 2017, when I got a chance to see some of the items in the Kunstmuseum Den Haag behind the scenes, on a study table. Including this dress: 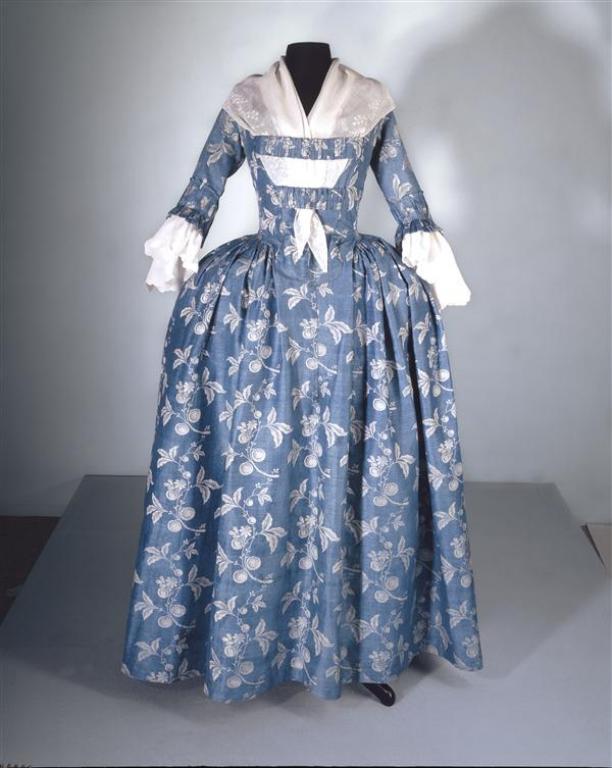 I took a fair number of pictures of it showing the inside. Including of how the skirt was attached to the bodice, which was clearly cartridge pleating. All 3 characteristics were there!

This picture clearly shows how the fabric has been folded over, and how there’s a little ‘ridge’ where it’s attached to the bodice.

And this picture from the outside shows, if you look closely, glimpses of the threads keeping the pleats in place.

So what, you might ask? And so would I have, until I got a comment on one of my pictures on Facebook: “I thought they didn’t do cartridge pleating in the 18th century“.

I did not know this, and my first thought was: “Obviously they did, look at this dress“.

But once I knew this, I saw many more people talk about how cartridge pleating was just not done on these gowns (or any 18th century gown, for that matter). And these were people who I’d consider experts, long-term costumers and reenactors who had seen many original garments. In short: people much more experienced than me in 18th century dress.

Instead of cartridge pleating, the way to attach the skirts was by knife pleating, which is done by folding the fabric into one direction, stitching it on flattened through all layers. Like I did with my own silver gown: (even though here, the skirt was cut separately from the bodice.)

Or on this original gown sold by Vintage textile.com 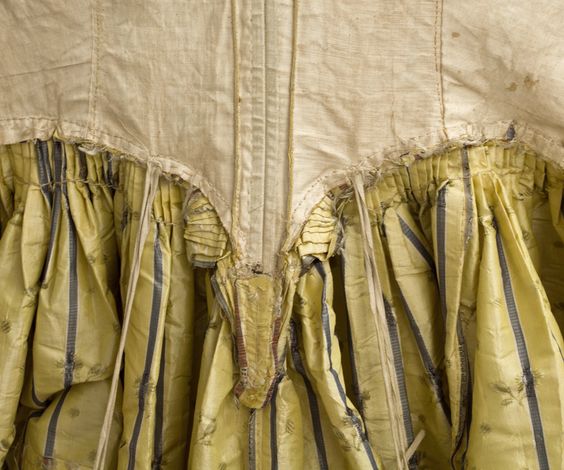 So maybe the blue gown was just an oddity? That happens, you can often find single exceptions to a rule, and one counter-example does not prove something is commonly done. Maybe the person for who this dress was made just had odd taste?

Except that I also visited more exhibitions around the country. And I kept seeing Anglaise’s with what seemed like cartridge pleated skirts. From the outside, so it’s more difficult to be sure, but it certainly looks a great, great deal like cartridge pleating to me. This blue gown seemed increasingly less an oddity, and increasingly more like a very typical example.

These are pictures of the 4 gowns I’ve seen which seem to be cartridge pleated. Of all of the Anglaises I saw with folded back pleats and where I could see the skirt attachment clearly, this is 100% of them. I don’t doubt there’s English gowns in Dutch collections which clearly show knife pleats. But I haven’t seen any in person. 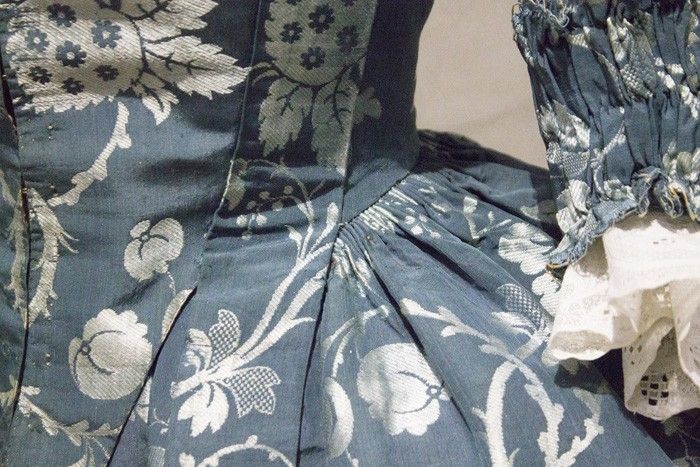 Kunstmuseum den Haag circa 1775-1799 (although similar, this is a different dress than the first! 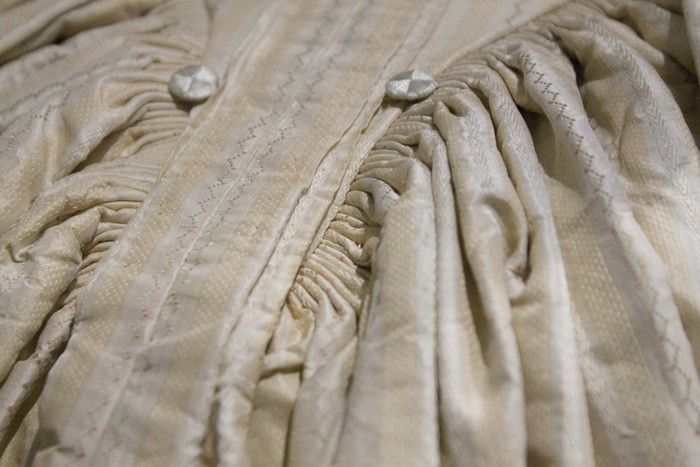 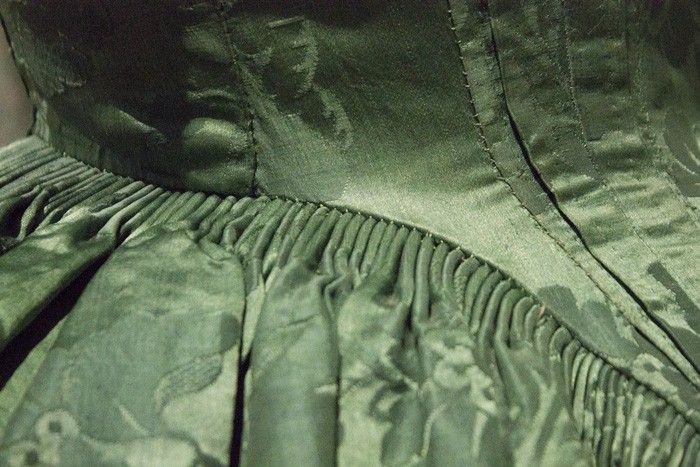 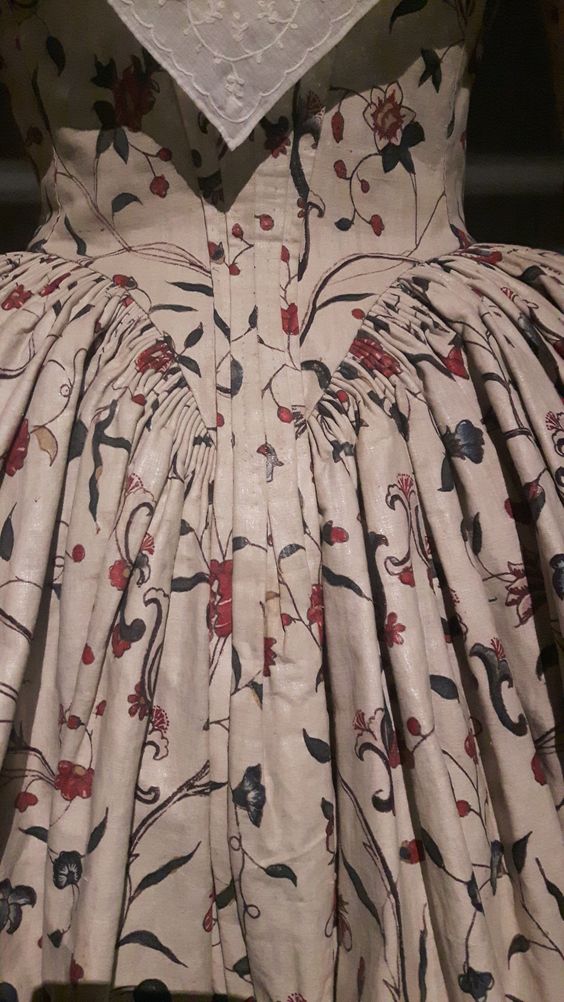 So what’s true here? Were these experts wrong in saying there was no cartridge pleating? Or was I seeing all of these wrong? My theory is that it’s neither, and although I cannot be 100% sure, what seems most likely to me is this:

Cartridge pleating your skirts was a typically Dutch thing to do. It was normal in the Netherlands, despite not being at all fashionable in France or England (and, therefore, the US).

This fits with the fact that 1. All the experts I’ve heard the ‘no cartridge pleating’ from are speakers of English and most familiar with English and American collections. And 2. All these examples of cartridge pleating occur in Dutch collections. (I haven’t seen enough items from other countries/cultures to know if it extents beyond the Netherlands, but if anyone does I’d love to learn more!). I proposed this theory to the same experts on Facebook, and the general consensus was that this is probably correct. (I was not imagining things, yay!) 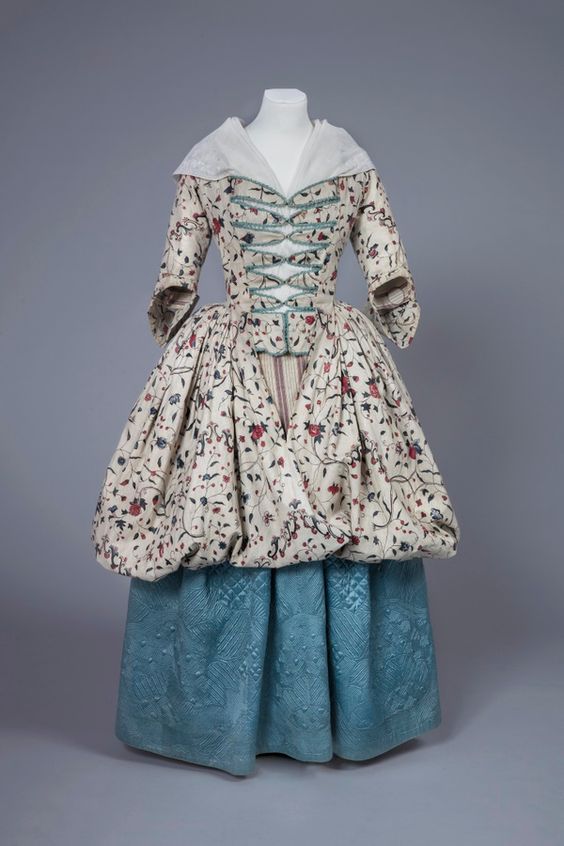 There are two additional things which seem to support this theory. The first is that nearly all the cartridge pleats I’ve seen occur on dresses which share some other shared characteristics. This type of dresses seems to exist much more in Dutch collections than in others, indicating that this style was popular mainly in the Netherlands.

Specifically, all of these gowns have the pleated back (even though by the 1780’s, a back with cut back panels became more popular), they have robings in the front (folded edges running over the shoulder) which run all the way into the skirt, and the space between the robings is filled with either 2 sewn-in panels closing center front, or several sewn-in trips of fabric closing center front. Although you see robings a lot in the 1740’s and 1750’s in England in particular, these robings typically stop at the bottom of the bodice, and the center front of these is open (to be worn with a stomacher). Moreover, this style had become very old-fashioned by the 1780s, while a fair number of these Dutch gowns is dated that late.

This picture points to the robings and cf closure on the green gown.

And this picture shows the lining of one of the strips closing the bodice on the first blue gown. You can see the (in the picture) horizontal fold above this, which is the robing.

There are more examples in Dutch collections that I haven’t seen in person, such as this lovely red chintz dress: 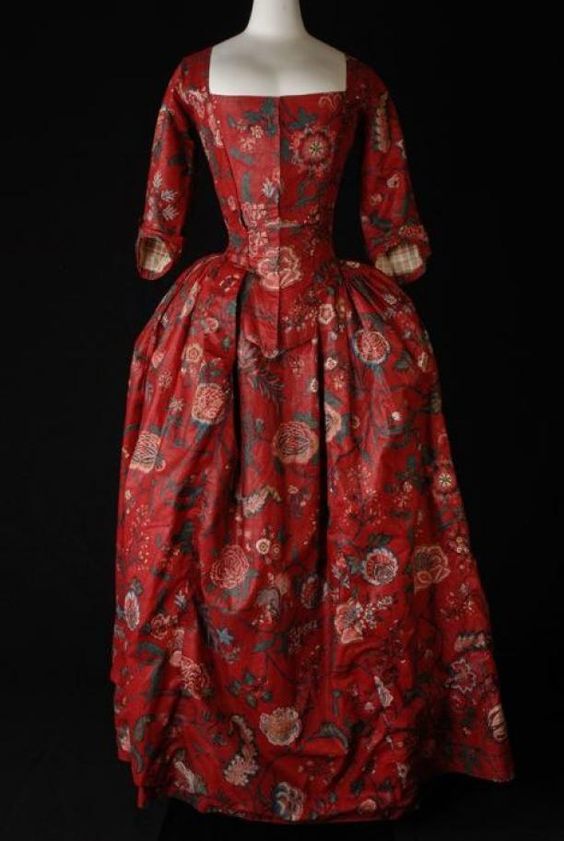 For more examples of this style, see this pinterest board!

The second is that we know from some contemporary accounts that Dutch women liked their skirts big, and cartridge pleating is particularly suited making very full skirts stand out even more. The book ‘Aangekleed gaat uit’ has a reference to women mocking others for their lack of petticoats, and the book ’18th century Dress in Europe’ has a quote of a contemporary (non-Dutch) traveler remarking on the same thing.

So, the moral of this story? For me, it drove home a couple of things. Firstly, that the further you go back in time, the more important it becomes not to generalize knowledge on one region to another. Yes, people traveled and communicated, but in the 18th century, there were still loads of characteristics of dress common in one region/country but not in the other. The second is that it’s important to ensure that ‘rules’ don’t make you blind to what’s right in front of you. A single exception does not prove a general rule is false, but it could be a sign that there’s more to the story. And finally, that there is definitely such a thing as cartridge pleated skirts to Anglaises, as long as you are talking about a Dutch context, even if there isn’t in a French/English one.

I also now want to make my next Anglaise with cartridge pleats!

Because it’s so pretty!

Edit per 10-01-2020: Two pictures of a silk dress from the Kunstmuseum Den Haag, seen early 2020 which shows cartridge pleats as well. This dress has the same characteristics as all the others, folded back pleats and folded robings in front.

17 thoughts on “Cartridge pleating in the 18th century”