When planning my late 15th century burgundian gown, the plan was always to make a ridiculously large henin to go with it. After all, the crazy hats are one of the most fun parts of late medieval fashion. 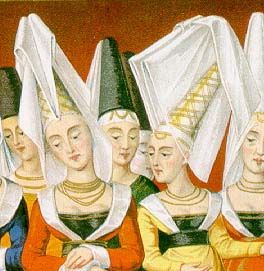 I wanted something like this. I really love the floating veils. Although probably unpractical, they’re such an eye catcher. The tall henins are generally called ‘steeple henins’, and they are always worn with a veil. The veil can either just be lain on top, extending from the back, or suspended as in these pictures. These are called ‘butterfly veils’. 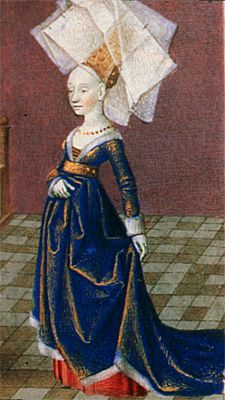 However, as I had an event to wear my burgundian dress to about a week after I finished it, the first hat I made was a bit more practical. I didn’t really have time to figure out how to keep the veils in place, nor to hem all that fabric for the veil, so I made a simpler, shorter henin.

It’s always good to have a more practical option at hand anyway, plus it looks adorable on my bear.

However, I did still really want the crazy tall hat. So I’ve finally made that one.

The base is the same as the shorter henin, just lengthened, and taken from the book ‘the Medieval Tailor’s assistant’. It’s about 40cm tall, taken from a shape which would be about 50cm tall if made into a full point. I made it open up top though, so the wires would have something to come out off.

The base is buckram, as for the other henin. Not very historically accurate, but easiest for now. From what I’ve read, the originals might’ve been woven baskets, but as I can’t weave basked reed I’m cheating.

The base is covered nearly the same as the short henin as well. Black cotton inside (because it’s easiest, though not period), silk taffeta on the outside, and a black velvet band on the inside bottom to make it grip with the velvet fillet. One change was an extra layer of black cotton between the silk and buckram, as the texture of the buckram shows through the thin silk a bit in the original. The other was that I added a round bit of millinery wire to the bottom of the cone this time, to help it keep shape a bit better.

The cone was hand-sewn into shape. And then it was time for the wires! This was the part I’d been dreading most. Although the book advises to take 2 wires and extend those from the tip of the henin, I took a slightly different approach. This was done mostly to try to stabilize the wires as much as possible, and stop them from swinging around. Instead of taking 2 separate wires, I took one very long piece to make the shape. This means they’re connected to each other at the bottom, and makes it a lot harder for the tips to swing sideways. The other change was to make them extend quite far into the henin itself, instead of attaching them at the very tip, again for stability.

The right shape, but they moved around way too much, even without veil.

Nevertheless, my first attempt was rather wobbly. The shape was okay, but in retrospect my wire was way to thin. I could’ve known, as the book advices to use 2mm wire. When I actually took that advice for the second version (2mm fencing wire was what I used), it was way better and much more stable.

Much better. This is the final shape, before going into the henin.

The wires were sewn into the henin. At the bottom, the horizontal piece keeps the wire from slipping down. At the top they come a bit closer together to fit through the hole, here they are attached again. I also stitched between them, to keep the wires from pulling the top of the henin into a wider shape.

With the wires done, it was time for veils! I ended up using silk organza, my veil is 2m by 75cm. One edge was the selvage, the other parts were hemmed by hand to get a very narrow finish.

The veil is pinned to the henin middle front and back. Additionally, I pinned the veil to itself after the vertical parts of the wires. This keeps it from slipping forward, and keeps the parts at the sides hanging back from the face.

Pin behind the vertical wire

Pin at the top of the henin

It’s very pretty all put together, the veil definitely makes all the difference!

The whole construction stays on my head in several ways. First, it’s worn over a velvet fillet. This one I made for the earlier henin, and it’s cut on the bias so it can be stretched a bit and tied securely. Secondly, the velvet band on the inside of the henin creates extra grip on the fillet, keeping it from sliding. Finally, the hair is put into a high bun. My hair is quite long, so I have a substantial bun which supports the henin. All in all, it feels pretty sturdy and I can move easily without feeling like it’s going to slide off.

In addition to the shorter henin, I also cheated on the belt the first time, and wore a elastic one from H&M. It was a fantasy event anyway, so probably not many people noticed, but I did go on a scout for a better one.

On that same event, I found a stall from Pera Peris, a German company who do reproductions of medieval buckles, jewelry, etc. They even had the perfect buckle and matching belt end, just not with them at the time, so I ordered it online eventually.

It’s based on this portrait by Rogier van der Weyden, and perfect in style. 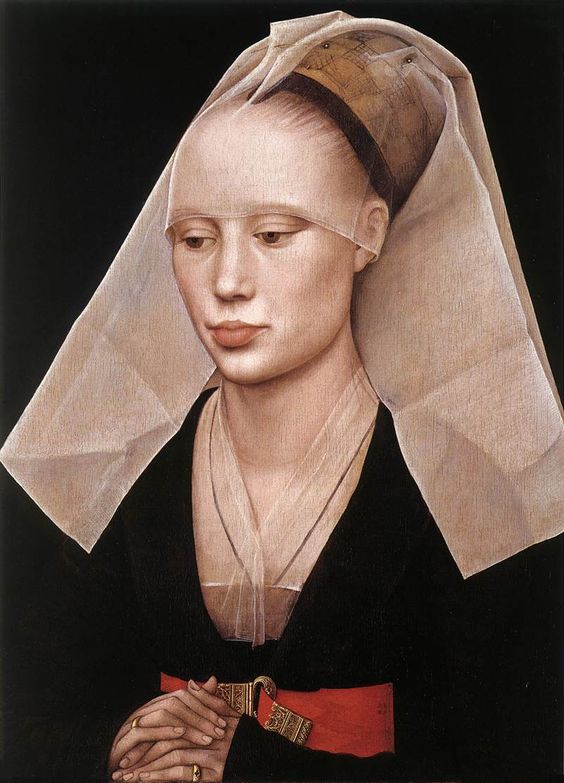 The buckle is 5,5cm wide and made for fabric belts, and I made mine out of black velvet, same as the collar of my dress. Although I like the brightly colored contrast belts as well, given that my dress is bright orange, I figured that’d be bold enough. The belt end is actually on the other side of the fabric than the buckle, as it flips over when closed. (As you see in the van der Weyden portrait as well).

I also made it a longer than in the portrait above, as it’s more flexible in length this way. You do see longer belts, interestingly enough they often seem to close in the back! That’s why you often don’t actually see buckles on the belts of burgundian gowns, they’re hidden behind the person. The belts tied in the back also seem longer than those left in front. 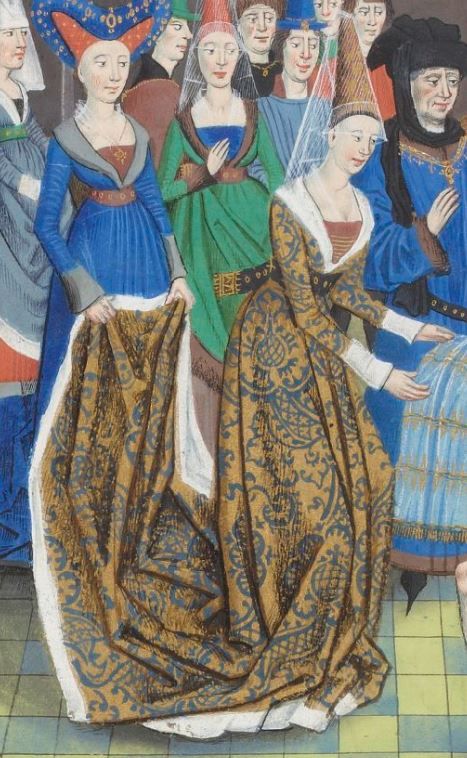 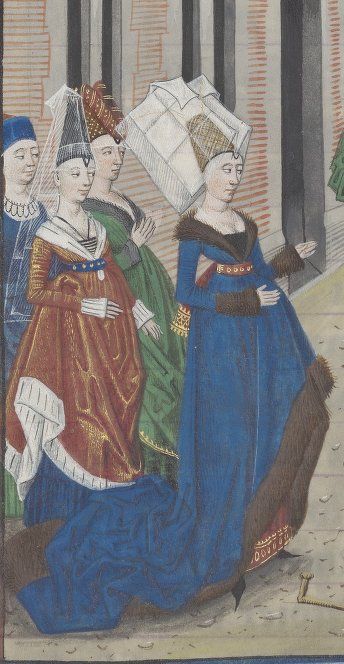 So now I finally have the outfit fully complete! I hope to wear it next weekend (if it stays dry, fingers crossed), some pictures of the full outfil will follow after.

Edit: A first picture of the complete outfit! See my facebook or instagram for a small video as well, as the veil moves beautifully!