Corset making is addictive. It can be frustrating, fiddly and there’s little room for error, but as soon as I finish one I’m thinking ‘I want to make more!’. Because despite being all of the above, they’re also incredibly rewarding. I guess this comes from it being so fiddly and precise work, if you do succeed it’s something to be proud of. And there’s so much which can go wrong, it’s difficult to get it to be perfect.

After finishing my Edwardian corset, I started to plan the next one. A modern corset this time, and an underbust. Both firsts for me. Of course, this didn’t stop me from trying to completely draft the pattern from scratch, which I’ve never done before either.

I drafted the pattern using a couple of tutorials and making them my own. I didn’t follow these exactly, but the over-all method I used is described really well here: https://katafalk.wordpress.com/2010/06/24/underbust-pattern-tutorial/ and here: http://ultharkitty.livejournal.com/641477.html . I decided on a 6-panel (per side) pattern.

I made the mock-up of a shiny, sturdy black polyester I had left-over from another project, and it actually worked really well right away. I hadn’t planned on doing anything with the mock-up, but then I followed a workshop on fabric decoration with paint, and the black mock-up fabric was perfect for it. As the pattern seemed to work pretty well, I took a leap and decided to finish it properly.

The fabric decoration technique I used is called ‘dotwork’, and is traditional to the Dutch town of Staphorst. They use it in their traditional clothing as a form of decoration. It came into existence to replace embroidery, which was more expensive because it took more time. Essentially, it’s a technique where you paint dots on fabric using the heads of nails to form patterns. If you get really good at it, this looks something like this:

The traditional colors are red, blue, yellow, green, purple and white. The background is traditionally dark blue or black. The patterns can be made quicker by using stamps, where multiple nails have been hammered into a piece of wood. A special paint is used, which has a plastic base. It applies well to fabric, and doesn’t wash out.

As a friend of mine followed a course in this technique, I was able to use some of her stamps and paint to decorate this corset. Making the stamps is one of the most difficult things of the whole process, so it made things a lot easier and quicker for me. Even so, it took me 2 afternoons to place all the dots. Once the paint touches the fabric, there’s no going back, so it’s a job which requires a lot of patience and concentration. It’s wonderfully relaxing to do though.

I ended up using only red and white, as I believed it looked best with the corset. In Staphorst they like very busy patterns, so this is a slightly more modern variation. The corset was constructed of 3 layers, the black as outside, a strong canvas-like cotton for the strength layer and a floating black cotton lining. It has a waist-tape and external red boning channels out of bias tape. The bones in the center-back are flat steel, all the others spiral.

I’m really happy with how it came out, and I love the shape it gives me. I’m planning to make another corset with this pattern, so I want to wear this one a bit to check if the fit stays right over time. There’s probably some small things I’ll change, such as adding a little extra room in the hip at the back, and raising the top, but overall it looks pretty good.

And lying flat, outside and in.

A little detail of the dots, binding and lining

The Dutch town of Staphorst is probably known best for its religious population and its folk costume. It has some of the youngest and most people still wearing folk costume daily, with around 500 women still wearing it in 2008.

The costume is known best for what is called ‘stipwerk’, or ‘dot-work’. Parts of the costume are made out of black fabric decorated by patterns of different coloured dots. The main variations in costume are of mourning/regular and sunday/workday, with special costumes for children. Three women from Staphorst in their Sunday church clothes, the left most is out of mourning, the middle one in light mourning and the right most in heavy mourning. 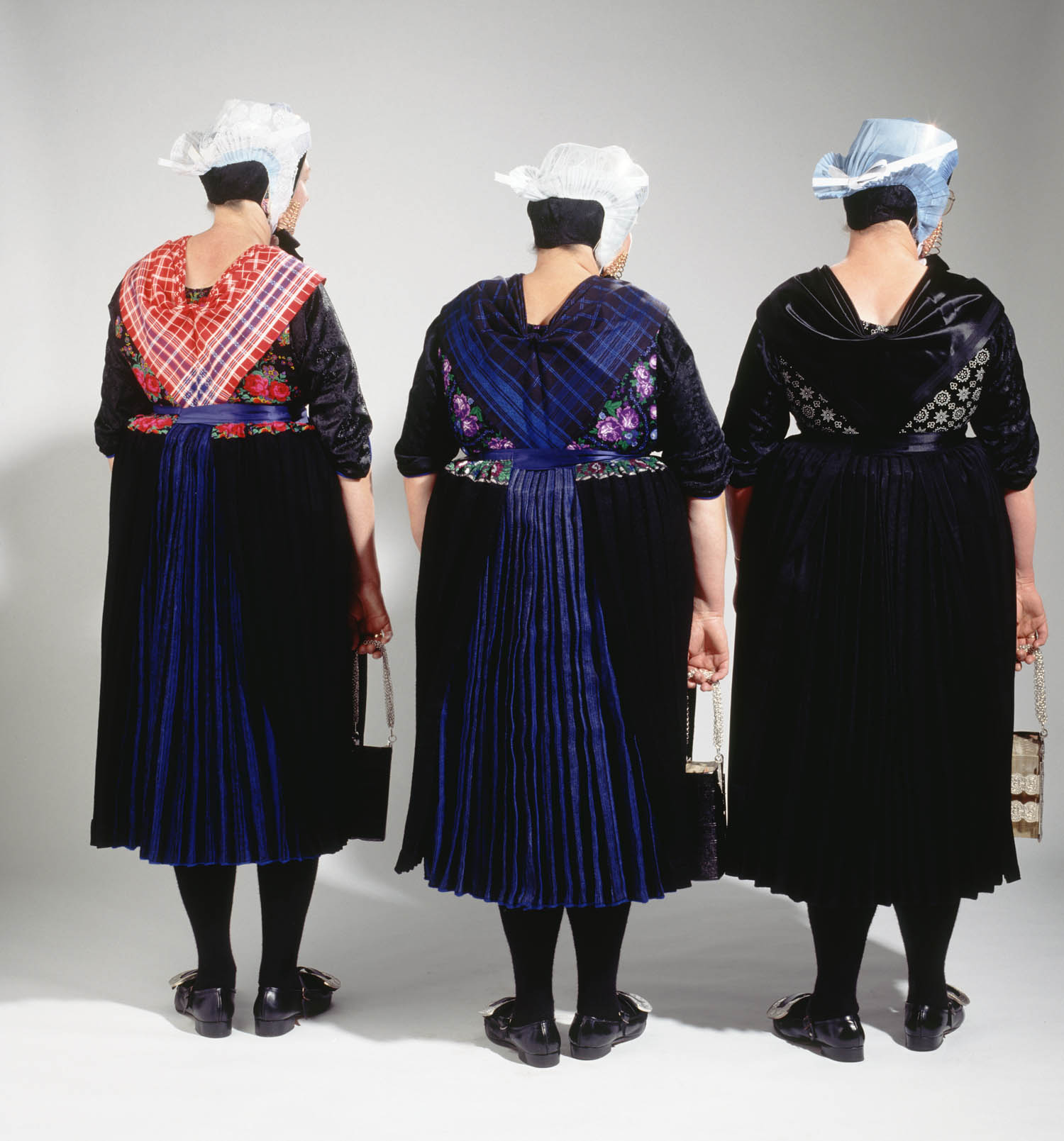 The back, here you can see the pleated shawls.

Mourning is expressed with the colours, as in most Dutch costume red is for out of mourning, blue and purple for light mourning and black for heavy mourning. The daily wear differs mostly with regards to the headwear, women wear simple dotted caps on work days. 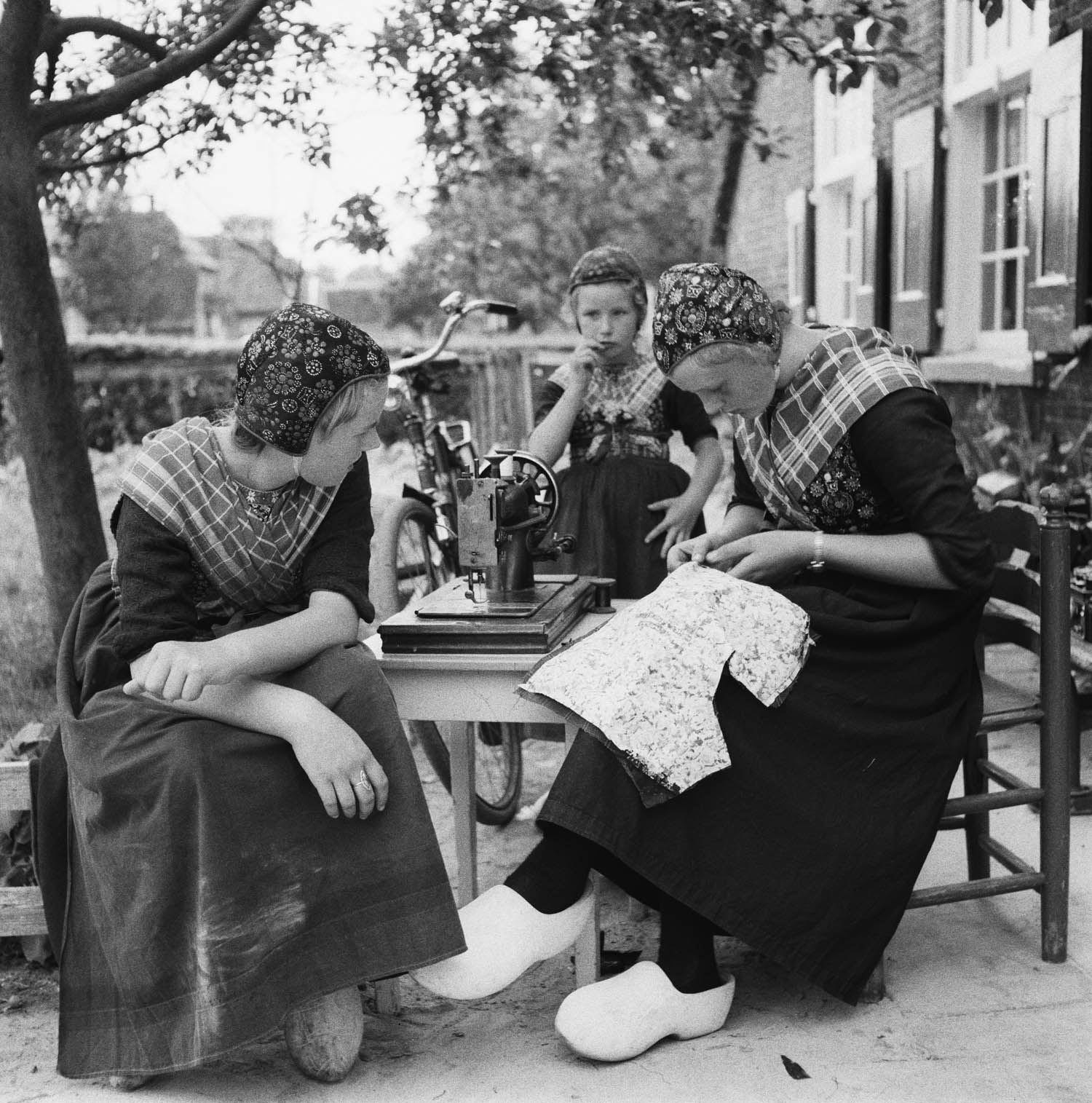 A photo from the sixties of the daily wear out of mourning.

The typical dotted patterns were often made by the women themselves, and created with the heads of nails and fabric paint. You’d need to stay out of the rain, because they’re not very water resistant! Typical fabric, this one would be for out of mourning. 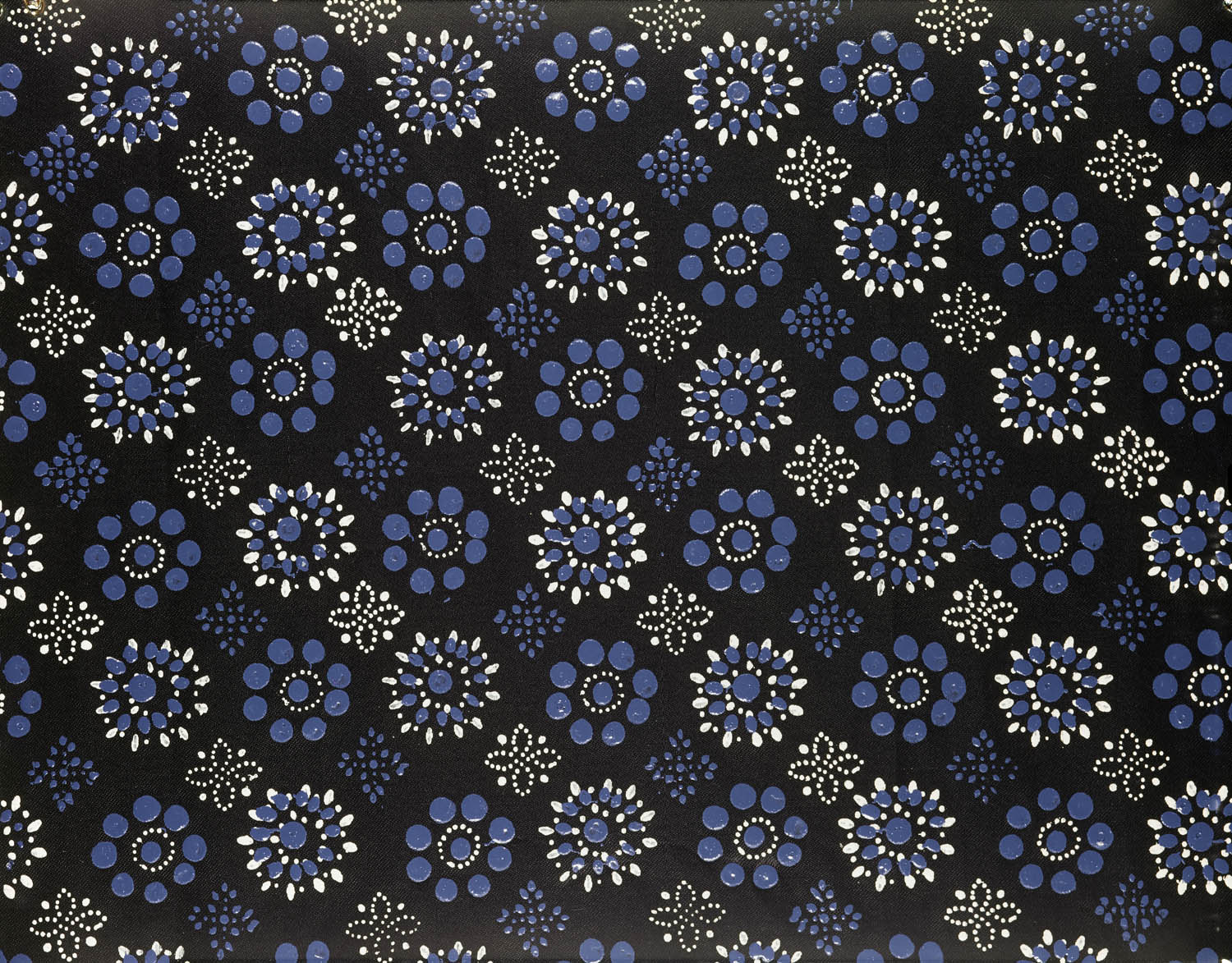 A work in progress. You can see he’s holding a cork with a nail in it to make the dots.

Of course, large patterns could also be made with these blocks.

The costume exists of black stockings and shoes, an under-skirt, a dark blue pleated skirt of sturdy fabric (black for heavy mourning), a black shirt, a black apron with a border at the top (flowers or checkered), a ‘kraplap’, a pleated shawl and the headwear. 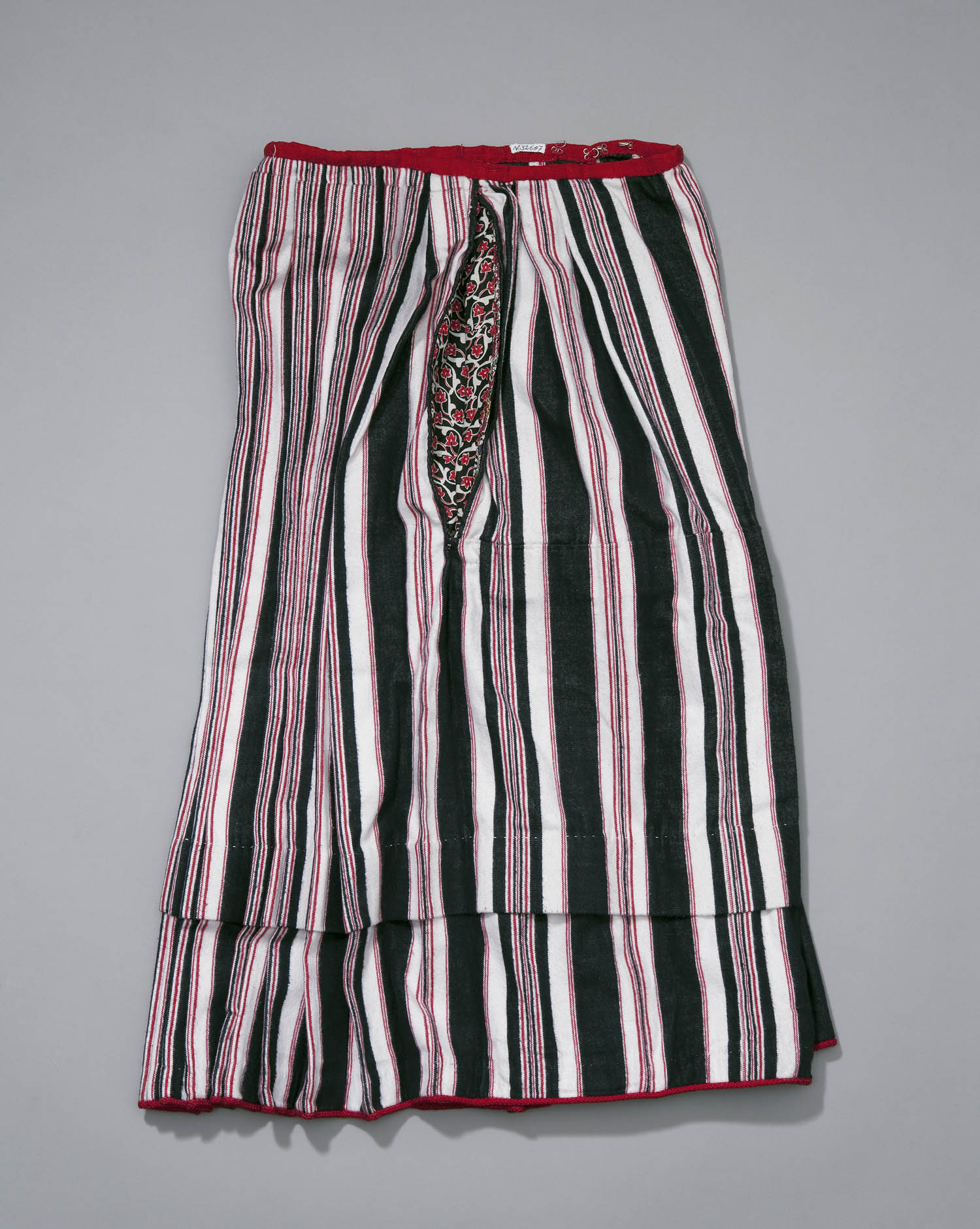 An under-skirt, worn as a petticoat. 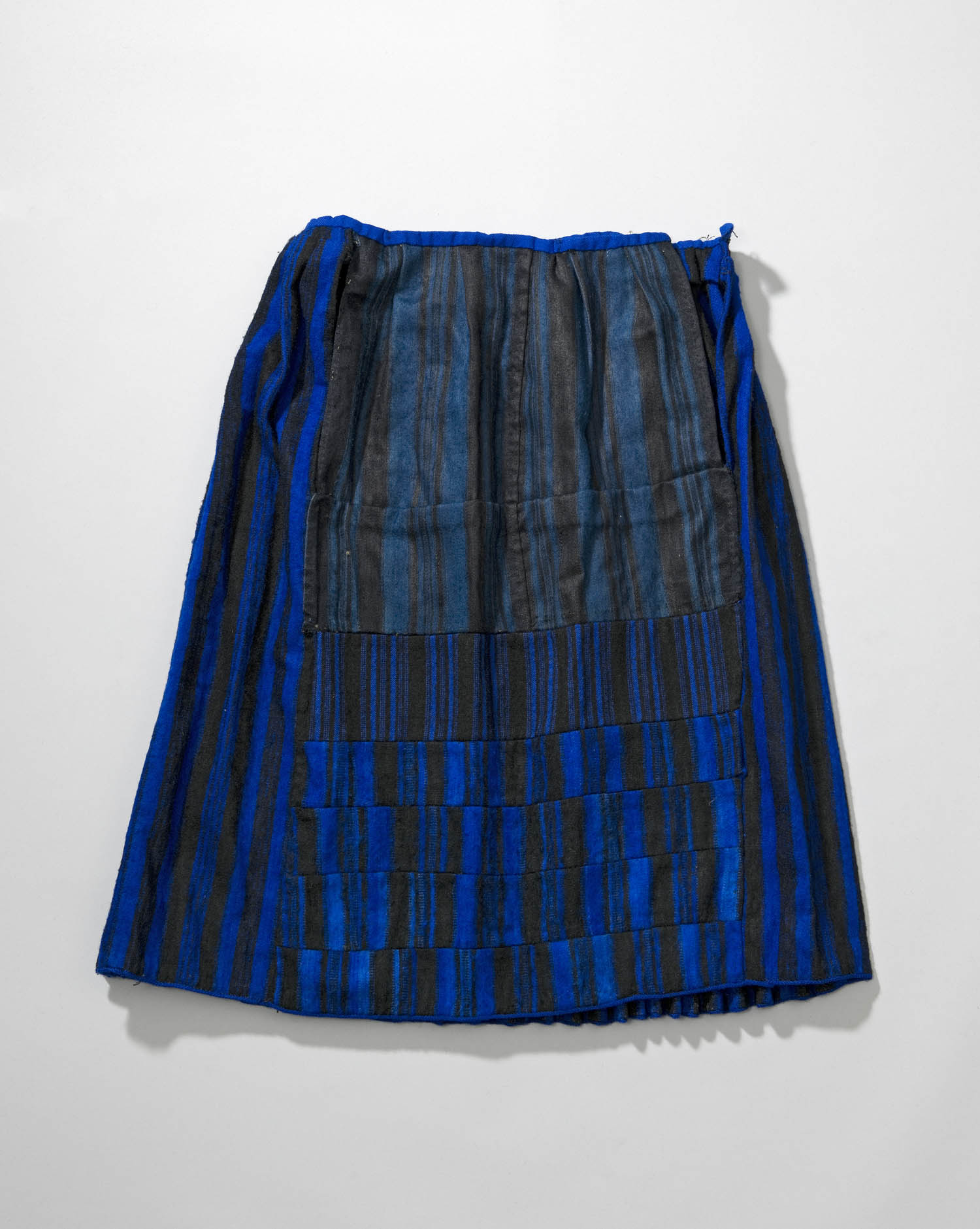 A Sunday-skirt. The front is made out of different fabric, which didn’t matter because the apron would cover it. 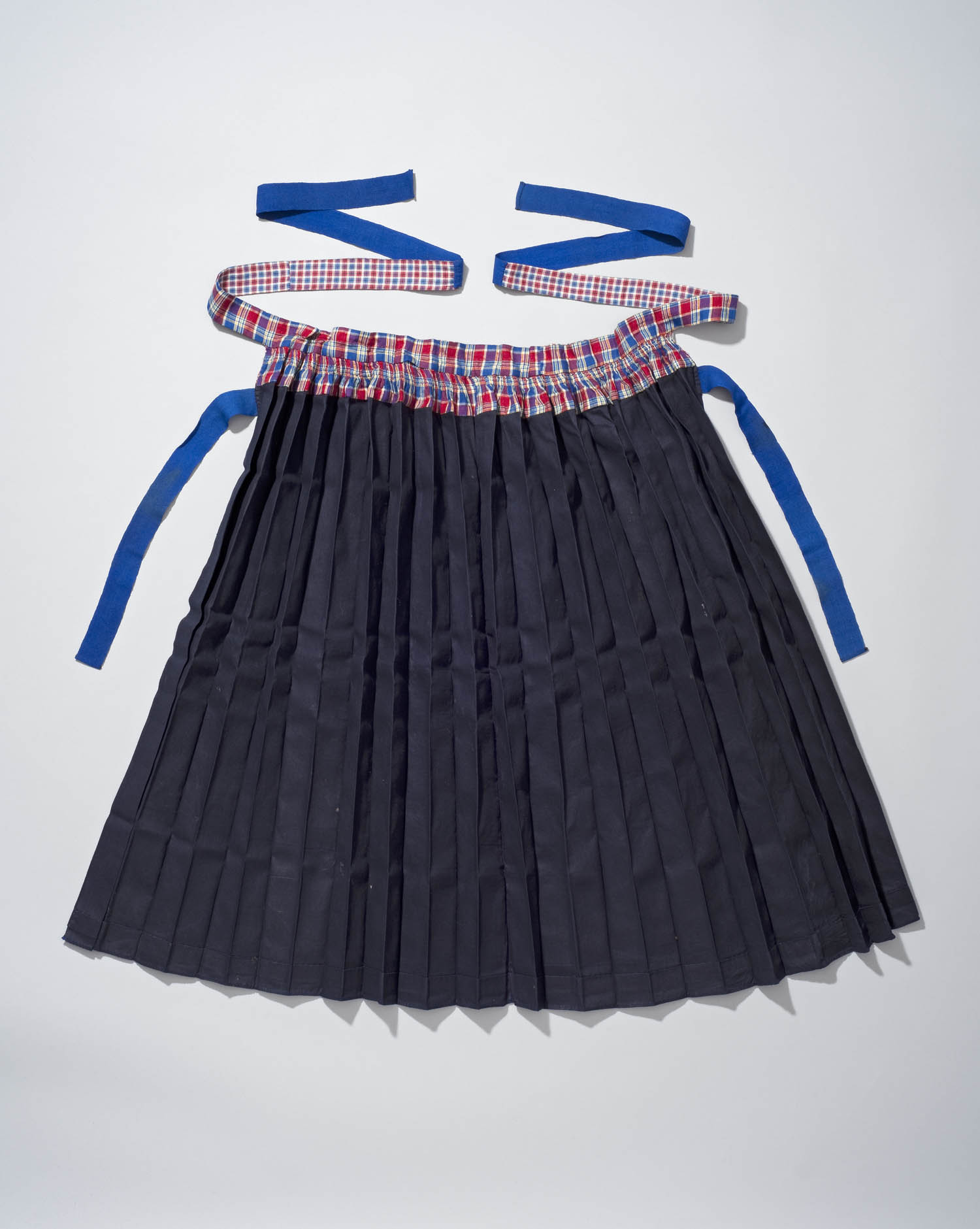 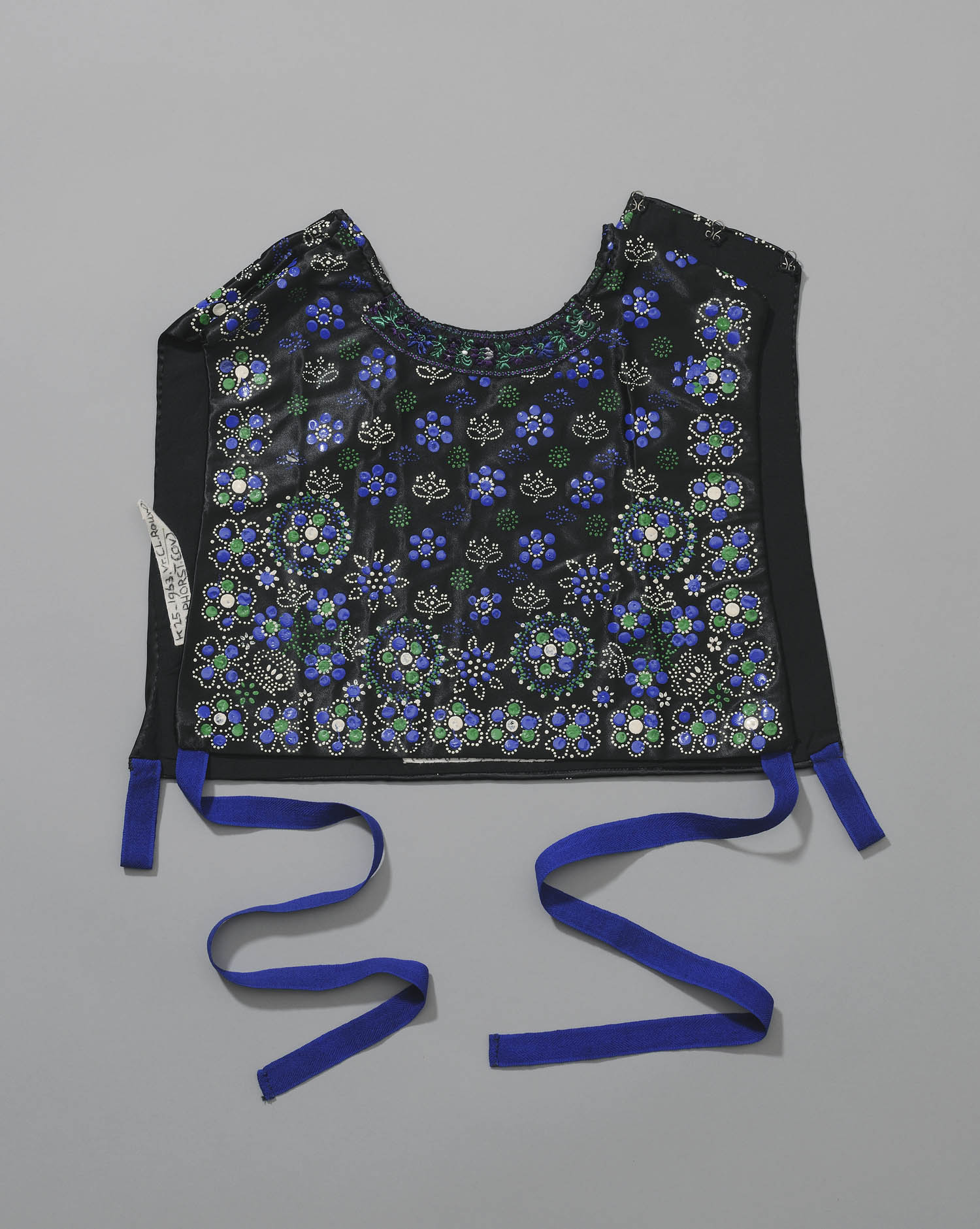 Kraplap, worn over the shirt. This one is for light mourning. 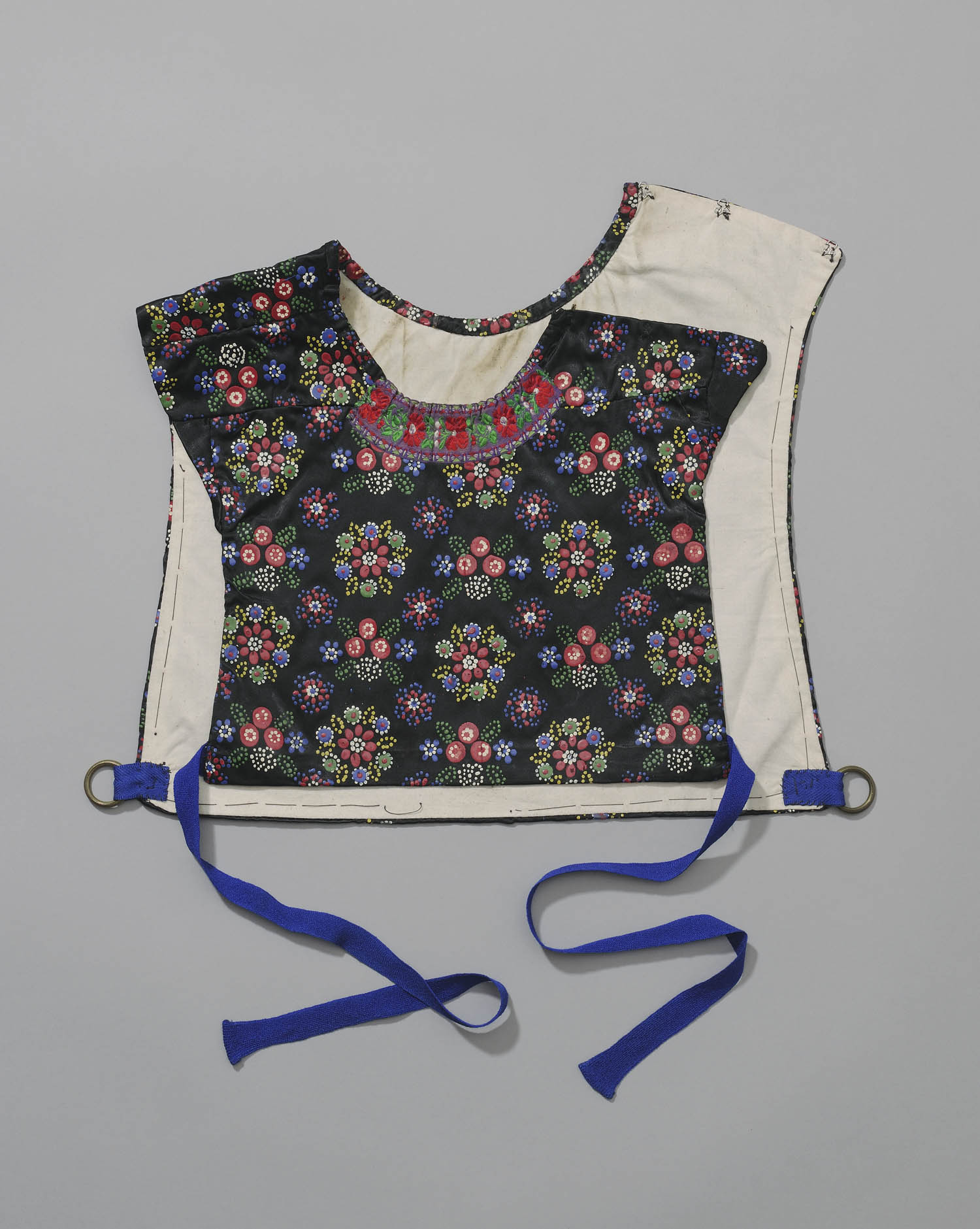 Kraplap for out of mourning 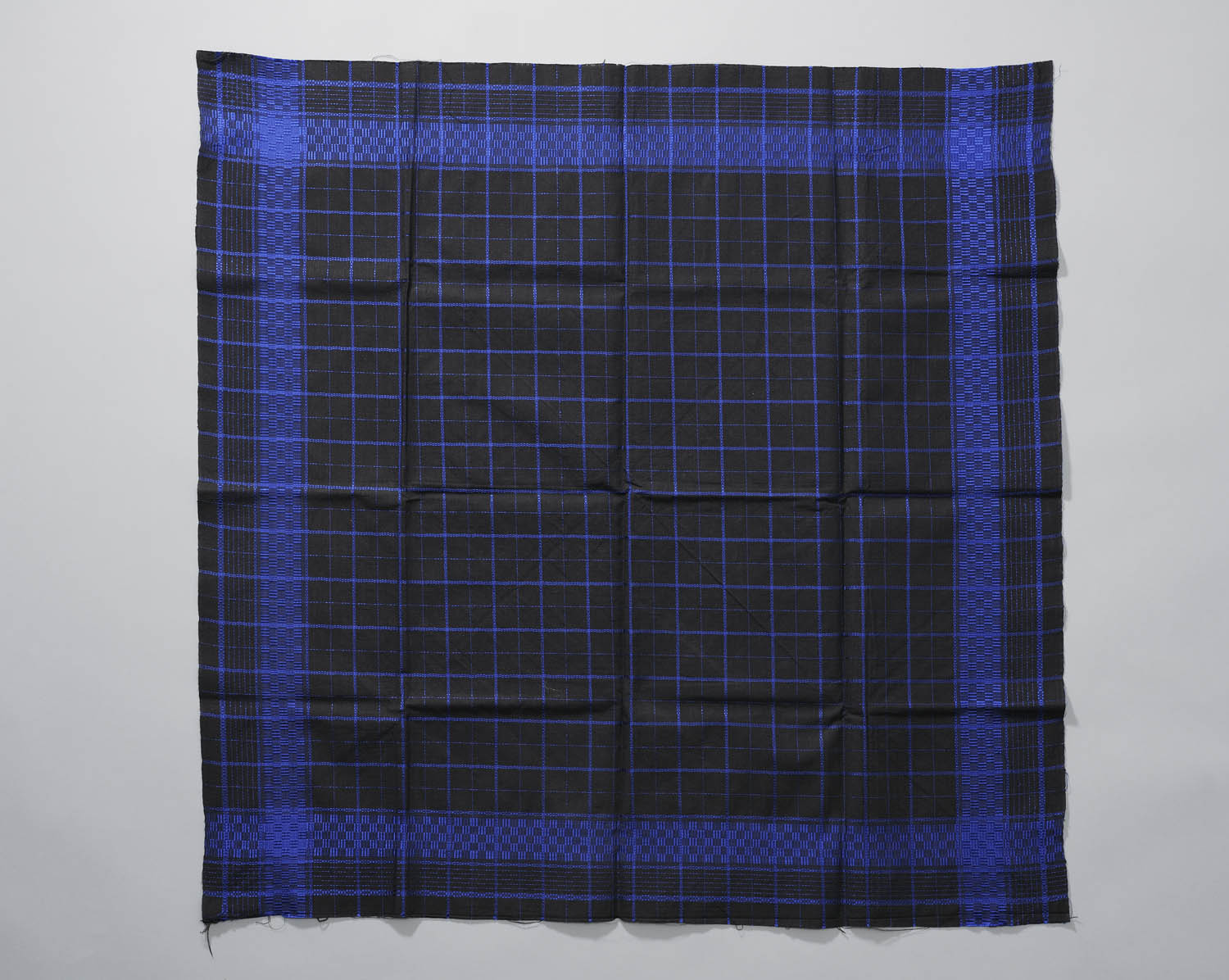 Out of mourning, the shawl was red.