A Dutch version of this blog is out today at ModeMuze.nl!

Janet Arnold is a household name for everyone who’s interested in the construction of historical clothing. In the 70’s and 80’s, she published several books with detailed patterns of existing garments. This Patterns of Fashion series is still one of the most used when it comes to recreating historical clothing. Part 1 is about women’s fashion from 1660 to 1860, part two about women’s clothing from 1860 to 1940, and part 3 women’s and men’s clothing from 1560 to 1620.

My copies of Patterns of Fashion 1 and 2

Janet Arnold passed away in 1998, leaving her work, in a way, unfinished. She had multiple further Patterns of Fashion books planned, and in 2008 part 4 was published, about linen undergarments and accessories from 1540 to 1660. This book was planned by her, and finished by Jenny Tiramani and Santina M. Levey.

However, there was a lot more material. From her legacy, the London School of Historical dress was founded in 2012, also housing her collection. This includes her pictures of originals, and the patterns she’d taken. And, end of this October, the latest book in the series will be published. Patterns of Fashion 5 is about ‘structural’ women’s garments from 1595 to 1795. Bodies, stays, hoops and rums. From the material and legacy of Janet Arnold, but supplemented thanks to modern techniques and new research, by Jenni Tiramani and Luca Costigliolio, with the assistance of Sebastien Passot, Armelle Lucas and Johannes Pietsch. In color, with detailed photographs, x-rays and patterns including all the different layers of the objects.

I had the pleasure of receiving my copy early at the Structuring Fashion conference in Munich, so in the rest of this blog, an overview of what to expect from the book! The pictures below present a small selection of the objects which can be found in the book.

The book starts with an extensive introduction, with a lot of information and new research using primary sources. It includes a description of the different types of materials which were used. Very useful, as words don’t always mean the same thing now, and some materials aren’t produced anymore. It also includes a description of how fashion evolved, and how these garments were made historically. It’s definitely recommended to actually read the full introduction, despite the temptation to only look at the pretty pictures, as it contains a wealth of information.

Because the book does contain a lot of pretty pictures. A number of objects has the well-known drawings as found in the earlier books. But every object is also photographed extensively. When possible mounted, to see the object in shape. And with a whole number of detail shots giving more information about construction. The inside, bits where the lining is coming off, close-ups of eyelets, etc. Every object also has an artwork accompanying it, in which you can see this type of object being worn in context. One of the highlights for me are the x-ray pictures. A number of objects have these, and they really show the true inside. How many layers of fabric it has, which way the seam allowances are folded, where the boning is placed, and where the metal 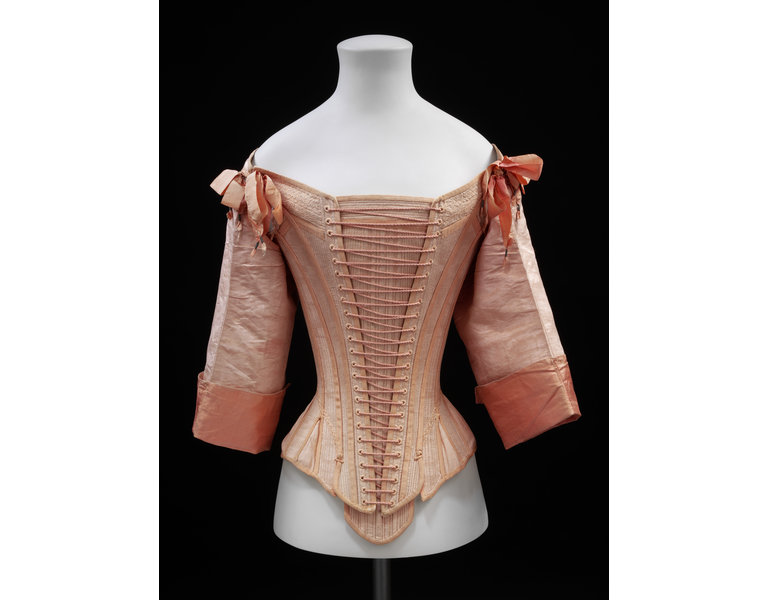 And now the patterns, because that’s what it’s all about in the end. All patterns are drawn on the familiar inch-grid, including a legend with cm, and the rulers in the end of the book. New in this book is that the patterns were drawn larger, and then scaled down to make them more precise. Also new is that many of the layers are shown individually. For some of the stays, the strength layer is not cut the same as the outer layer, and the lining might be different still. This makes it very difficult to get to the pattern of the inside layer. This is one of the places where the x-rays come in handy. The patterns also show very clearly how the object is stiffened. From baleen boning (sometimes including information on thickness), to steel, wood, extra layers of linen, leather and paper. They also include pictures of how exactly all those layers are put together. For the hoops the layers are a bit less relevant, but these also include information on how hoops are attached to achieve the end result. 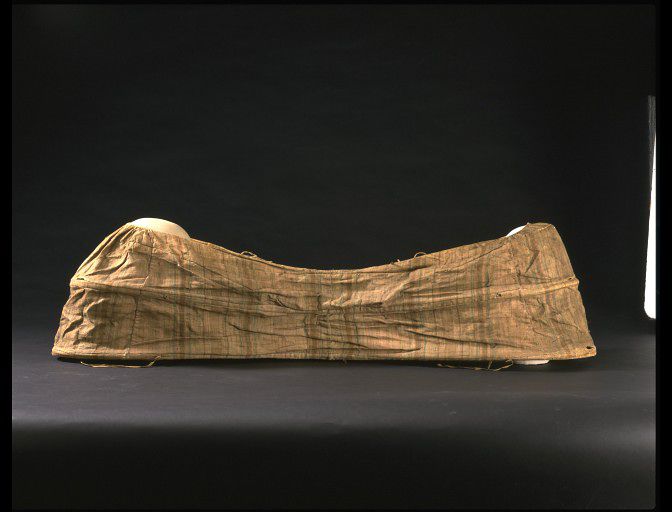 The book finished with a chapter on how to recreate the garments in the book. It includes a number of pictures of replicas made by the School of Historical dress, so you can see some of the more fragile objects mounted as well. One personal favourite bit is the description (based on a primary source) on how to draw the patterns for stays. Very interesting if you want to make them yourself! It even includes a list of where to get materials, and what to use instead of baleen. The chapter ends with a list of terms, with historical terms and their translations in English, French, German, Spanish and Italian, and sometimes Swedish or Dutch. 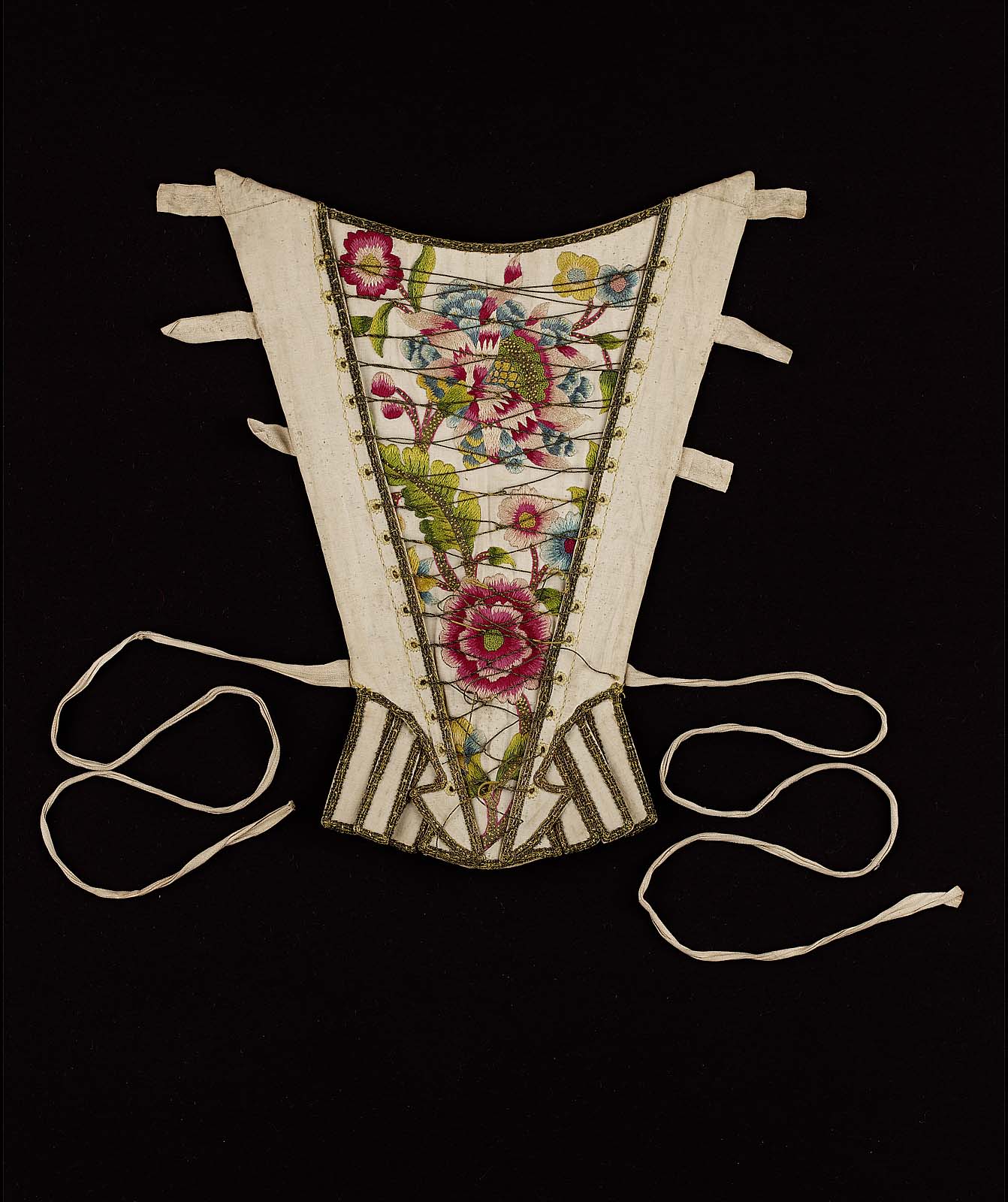 It’s really a beautiful book, and highly recommended for everyone who wishes to know more about these garments. With a lot of new knowledge, filled with beautiful patterns, and details of original garments. The book can only be ordered via the School of Historical dress (ISBN: 978 0 993174421). Edit per 20-11-2018: The copies are back in stock, but as they’re such a small team, they are only putting up the next 100 copies for sale once they’ve processed the previous. So if you see an ‘out of stock’, just keep checking their website! It’s well worth the wait.

Also, the ladies from American Duchess made a wonderful podcast with an interview with Jenni Tiramani, which I thoroughly recommend if you want to learn more about how this book came about. (Part I and II). 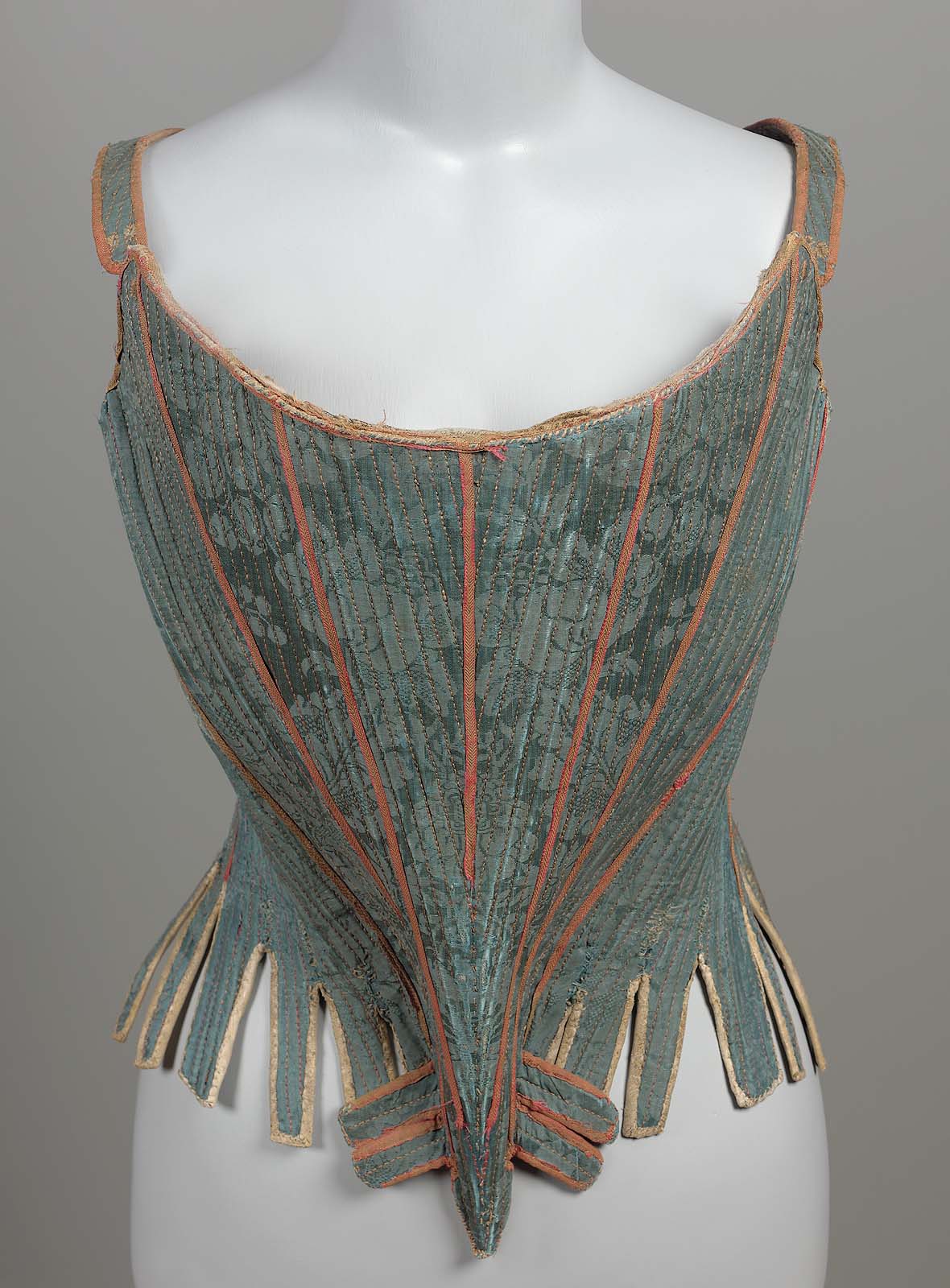