After drafting the pattern, the second step for making the stays was gathering materials. For this pair, my goal was to get it as close to the original as possible. Luckily for us, Patterns of Fashion 5 has very thorough descriptions of what was used, and in the front includes extra info on what historical materials were!

These stays have 4 main layers. Two layers of linen canvas which sandwich the bones, one layer of wool sateen which is included in the stitching and on the outside, and a layer of linen lining which is cut in just two pieces per side and added last.

I started by looking for linen canvas that would work. I knew I wouldn’t be able to find any in local shops, which meant searching online. This actually made it quite tricky, because the most important thing for this linen was the ‘hand’. It needs to be tightly woven and sturdy, but not necessarily heavy. On pictures you can’t always see how tightly woven a fabric is. And although you can often find weights for fabric, weight doesn’t necessarily translate to strength. In the end, I went by recommendations from the very helpful people at Foundations Revealed, and ordered the ‘Artist’s Canvas’ linen from Whaley’s Bradford. I also have a sample of the linen canvas that Sartor  carries, which I think would also work, but is just a bit heavier, and just a tad less stiff. Whaley’s stuff is beautiful, and I’m glad I ordered a bit extra for future projects.

The second fabric was the wool sateen. To be honest, I’d not even really started looking because I thought it’d be impossible to find wool sateen retail. But then someone mentioned that the same Whaley’s Bradford also carried wool sateen, so I ordered a bit of that! It’s a little whiter than the original fabric, as it’s prepped for dyeing, and I suspect it’s also less stiff. The book mentions that even the wool is quite stiff in the original pair, and my wool is very drapey. However, as the linen is what mostly takes care of the structure, I don’t mind too much. I also really love the pale cream color. It’s one of the most expensive fabrics I’ve ever bought (luckily you don’t need much for stays), but it’s absolutely stunning and beautiful to work with.

The next thing I went looking for was thread. I wanted to sew these stays with linen thread, which actually proved quite a challenge. I knew I could order it from the US, but that seemed a bit overkill for a bit of thread, so I initially went looking in physical shops and Dutch online stores. I could find cotton and silk thread, but not linen. Until I visited the store of Sartor when I was in Prague, and they had some! They sell it in three thicknesses, and I got quite a supply which I hope will carry me through.

To assist with sewing, I’m using bees wax I got from Sew Curvy. I hadn’t worked with waxing thread before, but know it was a very common thing especially for hand sewing with linen, and so far it’s working very well! My other sewing aids are needles I already had, a little pair of foldable scissors and my trusty thimble. 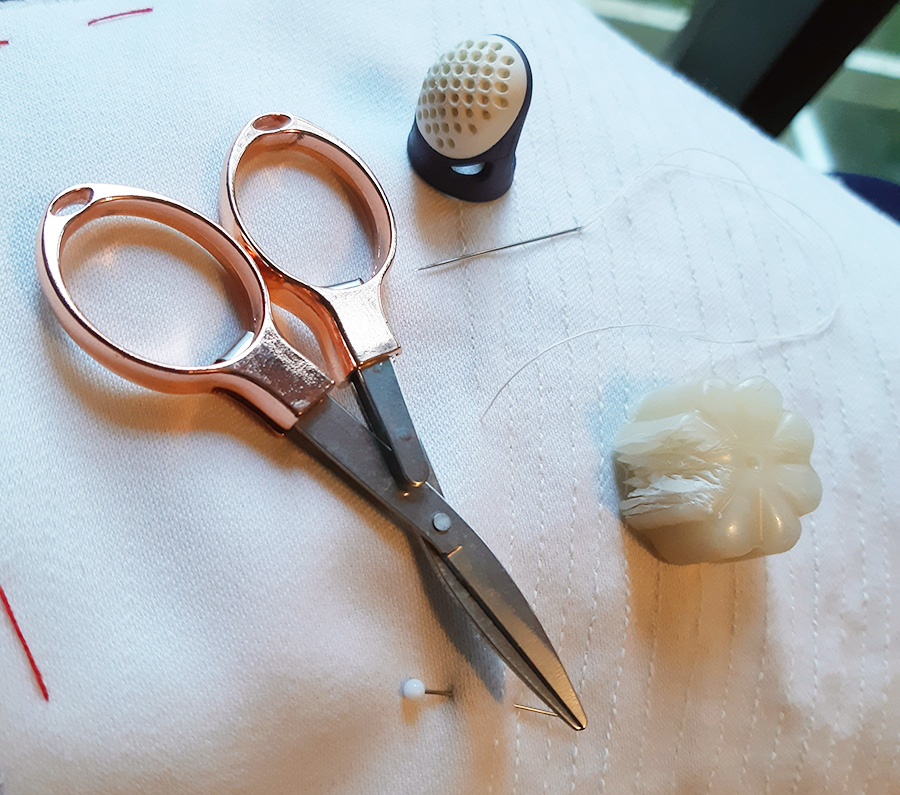 Before I could actually start sewing, I also needed boning. The original stays feature baleen, which wasn’t an option, so I went looking for synthetic whalebone. I initially looked for the 5mm wide as that was the smallest I’d seen in shops, but everyone seemed to be sold out right when I wanted to order. Luckily, Foundations Revealed came to the rescue again, as someone had a lot of left over 4mm wide synthethic whalebone and was willing to sell it to me. I’m very happy with the smaller size, as this will closer mimic the look of the originals with their very narrow boning channels. Additionally, I have some 6mm wide synthethic whalebone which is a little thicker (1,5mm instead of 1mm) as well for next to the lacing cords. And I have one wide metal bone, for the front. The original has thicker baleen horizontally in the front, but as I won’t be able to get synthethic whalebone thick enough, I’ll be using the steel. 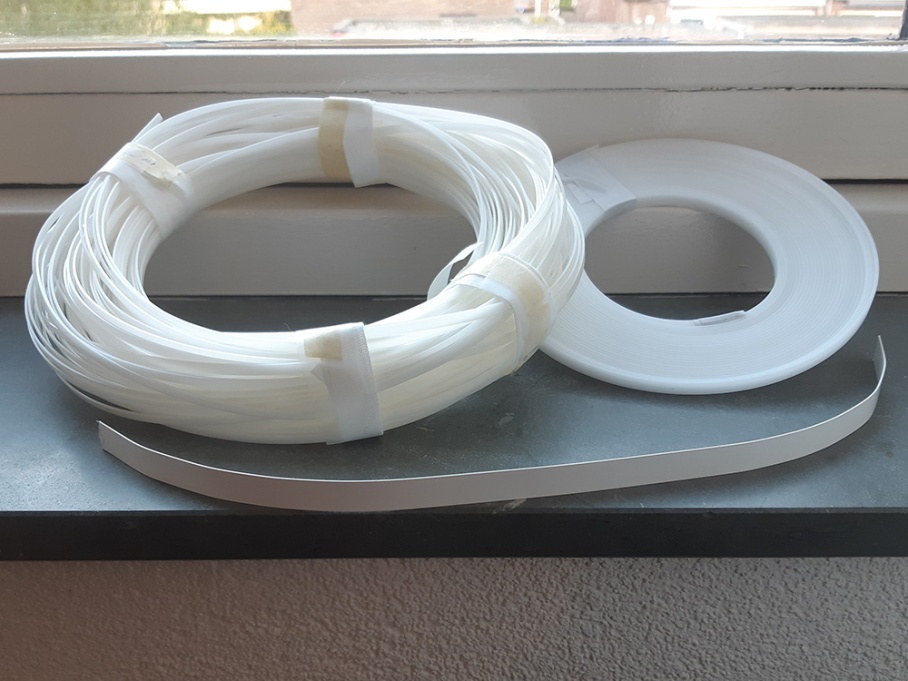 And that’s all the materials I have so far! There are some things still missing, most notably the binding. The top of the stays is bound with linen twill tape. I suspect I’ll have to settle for cotton tape for that one, but cotton did exist in the period so I can live with that. The bottom binding is leather, and I’ll have to look around a bit on what to use. For my green stays I used Chamois, which worked perfectly, but I think the original has stiffer leather. I’m not quite sure what I want yet, as stiffer also means more difficult to sew, and tabs are a pain as is. There’s also a leather guard under the arm, which I have yet to find material for. The lining linen will probably come out of my stash, as I have a couple of different white linens left over from other projects. And finally, there’ll be several pieces of linen buckram to stiffen the front. I plan to make this myself, as I’ve seen several people post on how to stiffen linen with natural glues. I don’t actually need these pieces until after all the channels are sewn though, so that can wait a bit longer.

The next step in the process is sewing the boning channels. This will actually take by far the longest, so it might be a while until there’s a next post about the stays! I’m now going at a rate of about 9cm per 10 minutes, so keep an eye on my Instagram for endless pictures of straight lines of white stitching… Meanwhile, here’s an example: