A little while back I was leafing through a book by the Gemeentemuseum in the Hague, ‘Romantische Mode’, which accompanied their exhibition on 19th century fashion a while back.

And in a chapter on silhouette I stumbled on an item I hadn’t really noticed before, namely this garment, labeled as ‘small corset (korsetje) 1800-1825’.

Gemeentemuseum Den Haag. Thanks to the museum for providing me with a High-res image, as it doesn’t have an online page. Click for full scale.

I was intrigued, as it seemed to be a type of Regency short stays I’d never seen before. Particularly the high center front, and the gathers. So I went online, and did some searching, went down the rabbit hole, and found some more interesting things.

Such that the ‘typical’ regency short stays I always thought of don’t seem to exist.

That this was obviously a transitional period, as several existent stays represent unique styles.

And that they had stretchy garments in the Regency period, way before the spandex corsets of the early 19th century came onto the scene.

The type of garment shown above includes metal coils, making it stretchy. They even seem to have had a name, the ‘corset elastique’. This explains the gathers, which initially confused me.

Then I posted this post, got some more feedback on this garment, and stuff got more complicated. So this is the revised post with my findings and thoughts!

First, let’s start with a bit of an overview on short stays.

I was familiar mostly with reproductions of short stays. My own pair is made with the Sense & Sensibility pattern, and that seems the predominant type of short stays made. The main characteristics of that pattern are: short, front lacing only, with bust gussets.

My own short stays.

However, when searching, I couldn’t find any examples of short stays which is actually like my own recreation. The most similar I could find is this one:

Couldn’t find a source for this though.

The main difference from mine is the length. Though shorter, this still goes down a bit, and has tabs. It’s similar to the one seen in this fashion plate:

Similar to the one above is this pair, the main difference being the lack of front lacing, and wrap around ties. 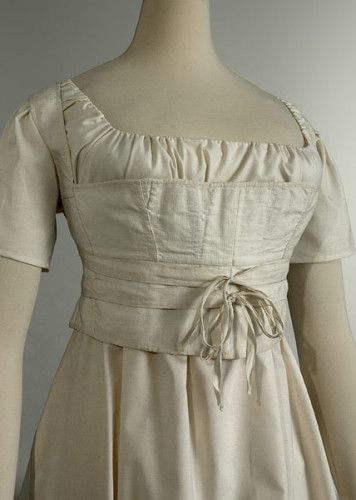 It doesn’t have front lacing, and the straps go around and tie in the front, but it does have the bust gussets, and it’s short.

The tying technique is also seen in this fashion plate: 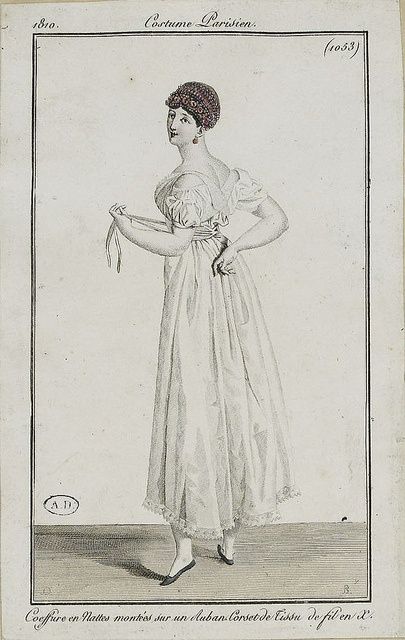 Another pair which has seen various reproduction is this garment in the Kyoto costume institute. However, I recently found that someone had looked at this in more detail, and that it’s most probably something very different, namely later 19th century posture improvers. The boning goes in the back, to support the back and keep the shoulders back. The original ‘letter’ can be found here, and is by collector and underwear expert Anton Priymak. I’m keeping this in this post because I hadn’t seen this ‘correction’ before, and because this image is still floating around as Regency stays. (Close-ups reveal machine stitching, so even if it turns out not to posture improvers, it’s definitely not Regency) 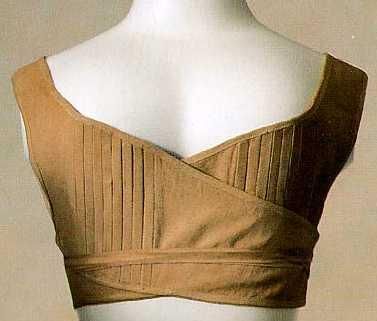 To wrap-up, there are not actually all that many ‘short stays’ out there. The vast majority of what has survived are ‘longer’ stays.

When looking for information, I also stumbled on some wonderful posts by ‘Kleidung um 1800‘, who did some in-depth research on stays of the very early 19th century, including on ‘short stays’. She looked at period descriptions naming ‘short stays’, and actually made some of them following period instructions! She noted that many of those actually look more like ‘longer’ stays, but are just quite light-weight and with a little boning. I won’t be repeating her findings here, so I’ll just refer to some of her posts, about the period ‘short’ stays, and another pair without lacing.

So where does that leave us with the garment that started the whole search?

Well, surprisingly to me, I actually found a number of examples of the ‘corset elastique’, similar to my original find. These examples are all really short, shorter even than my find, have front closing, and they all include metal springs.

This pair from the MET was the first one I found. And it’s strikingly similar to the one from the Gemeentemuseum. The gathered front, the high center front boning, front lacing. The main difference is the existence of sheer cups. This is the only pair I found with cups. Given how sheer the fabric is, this was probably mostly for control or decoration. 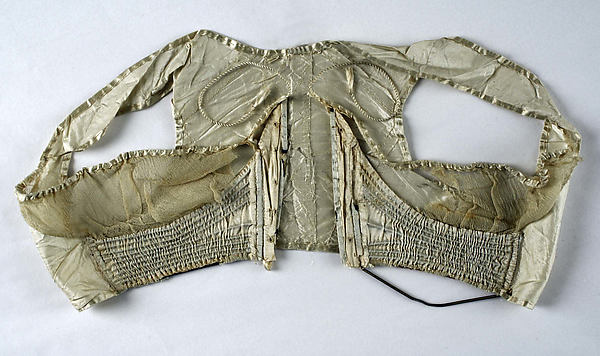 The high-resolution image also allows you to see the metal coil which has escaped from the bottom. This was the first ‘aha’ moment. The coils explain the gathers.

This was the first image, and the one most similar to my own find, but I found more.

These two examples show the same gathering around metal coils, though they don’t have the high center-front of the other two. They are also both in color.

This example has crossed straps in the back (follow the link for more pictures), and the straps attach with small buckles. 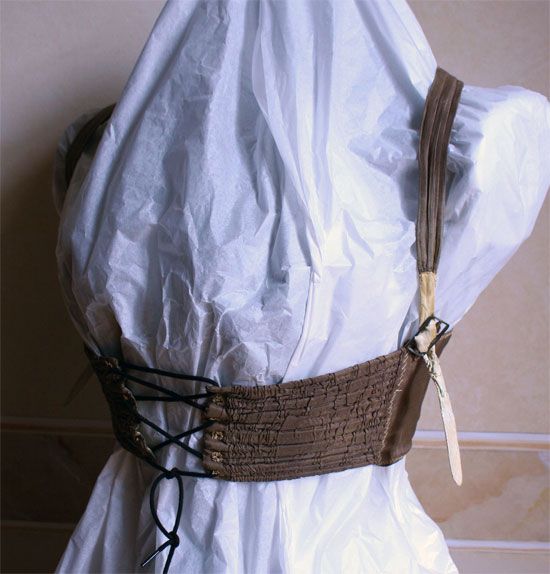 The final example is also straight across, and has a slightly different type of front closure.

This museum also gives the corset it’s name, the corset à élastique. And searching by that name, I actually found another example, this time in a fashion plate, from the Journal des Dames et des Modes. Looking closely, you see the three straps in the front, with little stripes, exactly like the previous example. And it’s got the crossed straps from the third one. 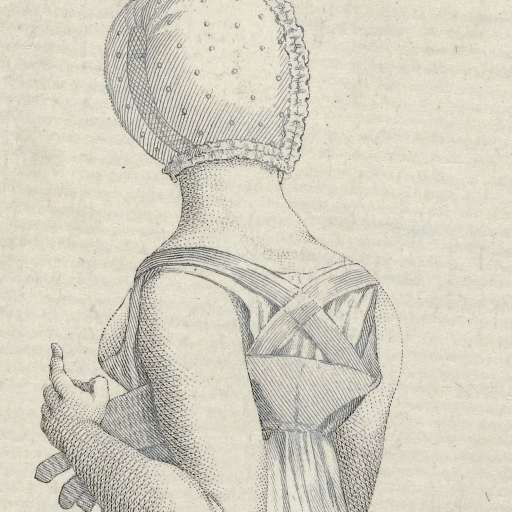 And here I thought I was done, but of course, history is always more complicated than you’d think! Sabine, from Kleiding um 1800, pointed out to me that she’d seen these three garments shown above, but interpreted them as outer wear, to wear on top of a dress. (She made one by the way, which is wonderful)

This is supported, firstly, by the fashion plate below, which shows a very similar garment worn over an outfit. 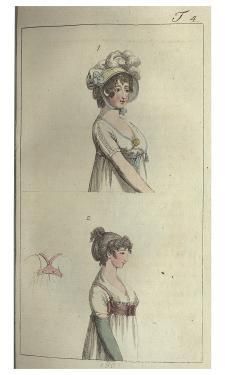 It also makes sense given the darker colors of the last two items, as most dresses in this period were sheer and white, and most underwear would also be white. Of course, history is always good at exceptions. 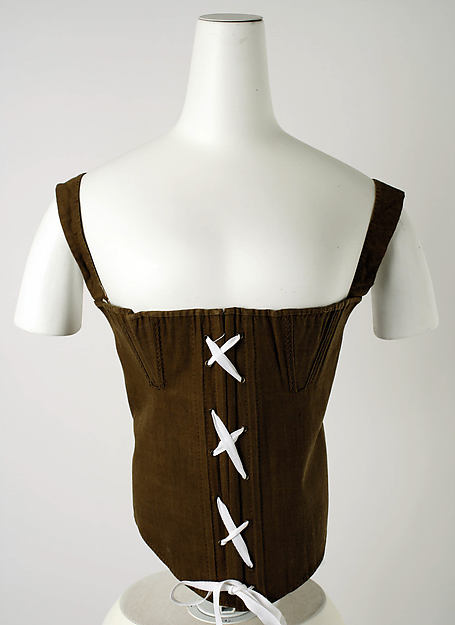 The fact that all of them are made of silk could also point in the direction of outerwear, although again, at least until the late 18th century, I could find exceptions: 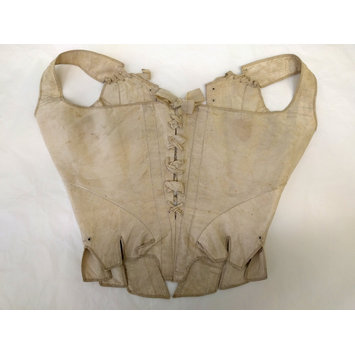 So if they are outerwear, what’s up with the fashion plate from the Rijksmuseum, clearly showing them as underwear? One reason for this might be that fashion magazines copied from one-another, and might have mis-interpreted it. Again, thanks to Sabine for this theory.

It might also be the case that, because of how much fashion was transitioning, that people actually wore these in various versions as outer or underwear. To me, the boning and metal coils seem to point in the direction of shaping the body. Something that most other ‘bodice-type’ garments of this era that I’ve seen don’t do. It makes more sense to me that they were, at some point at least, also meant as supportive garments, but that’s purely my own theory.

Most I know of look more like this. No boning/structure involved, as it’s worn on top of undergarments, that isn’t necessary. 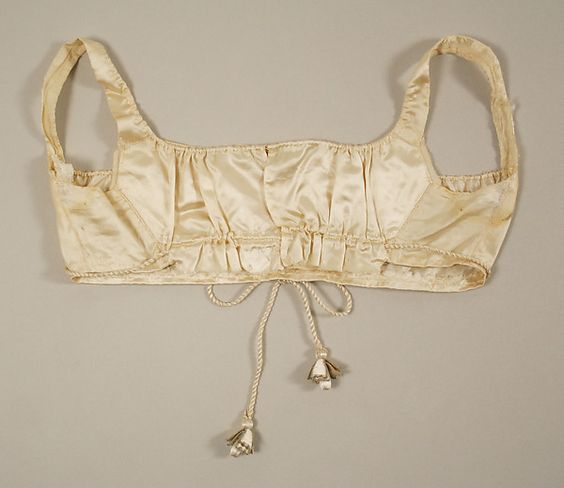 Just a quick note on terminology, I’ve seen the term ‘corset’ (in French!) refer to garments clearly worn on top of a dress in this era. So just the fact that they called it a ‘corset’, does not mean it’s underwear. 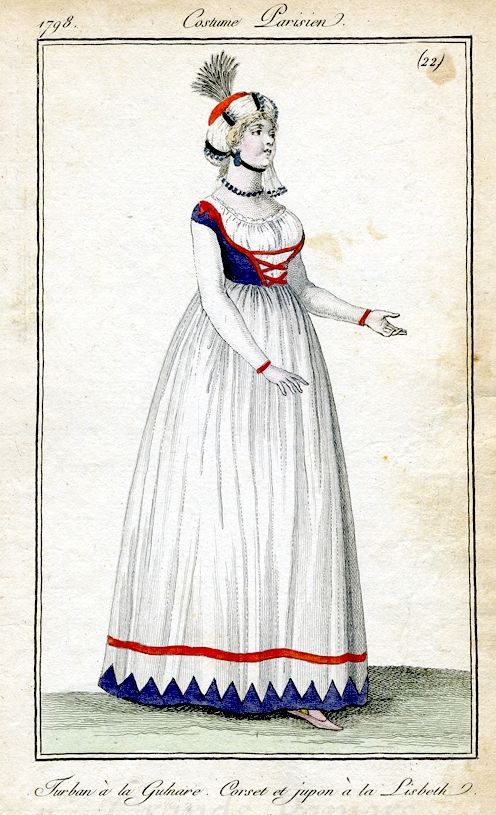 In this light, it is, however, interesting to point out some other versions of the ‘corset elastique’. Firstly, this late 18th century pair of stays: (the left one)

This pair actually seems to have the metal springs as well, but in the side. I couldn’t find a picture of the front, unfortunately, so it’s difficult to say what’s going on there. But this, at least, seems to prove that the metal springs were, in some cases, used in supportive underwear.

Another signal in this direction are these sketches from the ‘ Histoire naturelle, de la femme, suive D un traite D’ygiene’, by Lacroix, 1803. Foundations revealed have an article on the corset elastique describing these in more detail, the thing in the middle is a busk, which extends longer than the stays. 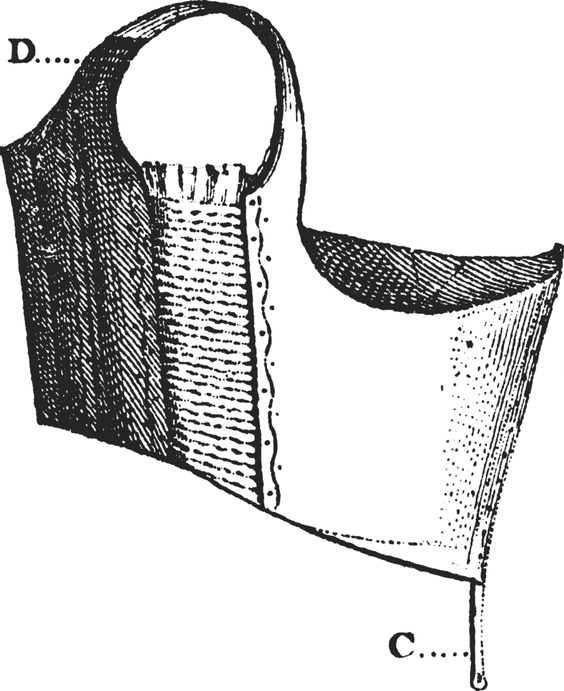 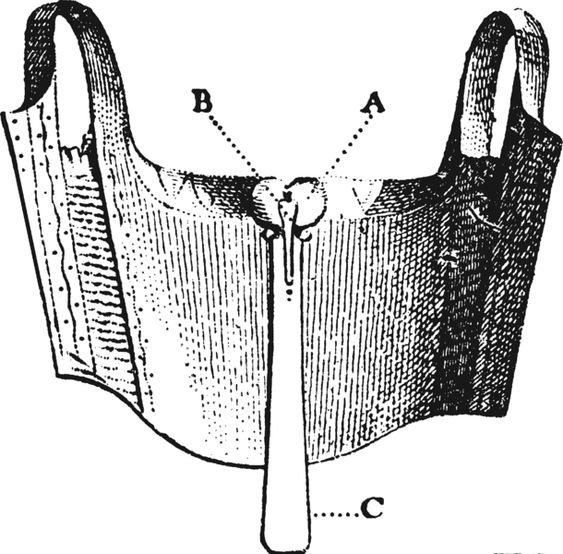 And then a very helpful comment by Anna-Carin pointed me in the direction of a little book by J.S. Bernhardt, published in 1810/1811, on stays. And she pointed out that there was a pattern in this book, which was remarkably like the corset elastiques shown!

The description of this garment (page 95 & 96 in the book) clearly refers to the corset being ‘elastic’, calling the metal coils ‘gesponnene Draht’, instructing they should be two ‘Zoll’ shorter than the pattern panel. This ruching removes the need for a gusset in panel D (as the bottom automatically becomes gathered), and the shortness means no tabs are necessary over the hips either.

So, conclusions? There seems to be at least some types of underwear which used metal springs to make the garment stretchy. They are called ‘corset elastique’ (at least in French). Similarly, there is a garment meant to wear on top of a dress, also called a ‘corset elastique’, which also has these metal springs. It’s quite difficult to tell what existent garments were meant as which, although the colored ones at least seam to point in the direction of outer wear.

As to my original garment, it’s still a bit unclear. I’d interpreted it as underwear, also because of the chapter of the book it was in, and because it was termed ‘corset’, and it was white. It is, however, made of silk, which was uncommon for undergarments. Looks wise, it seems similar to both garments which were probably meant as outer wear, and a pattern for underwear. At this point, I’ve listed what I could find, and will leave further interpretations up tot he reader. If anyone has any further information, I’d love to know! (Many thanks to everyone who has already chimed in!)