The mid-1880’s are all about the dramatic silhouette. The bustle is back in full force, and the fashion is for a small waist, full bust and relatively broad shoulders. In fashion plates you can clearly see this fashionable shape, which is of course exaggerated to near impossible proportions. 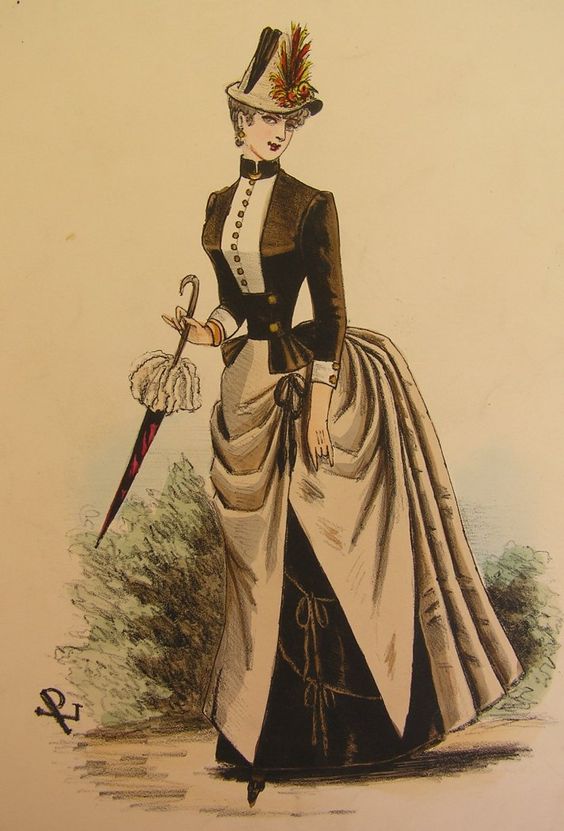 I’ve started working on my first 1880’s dress, which will be a burgundy wool winter gown. Although I already have a 1870’s corset, I wanted to try to approximate the fashionable shape of the 1880’s a bit more. In my case that meant padding in the bust area, as there’s no way I can achieve (or even approximate) it naturally…

That’s when the idea for a new corset started, to be patterned on top of a padded bra. In my previous post I showed the process of patterning, and afterwards I could finally start making the corset! 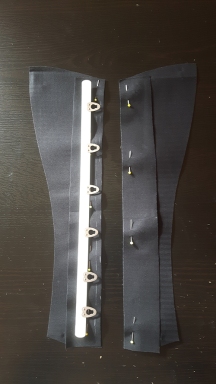 I really love cording on corsets, and wanted to incorporate it in this one as well. As first I was wondering if it’d be possible with a single layer, but then I saw this corset on a visit to Stockholm. As you can see, there’s an extra piece of fabric placed on top of the main fabric to serve as corded panel. 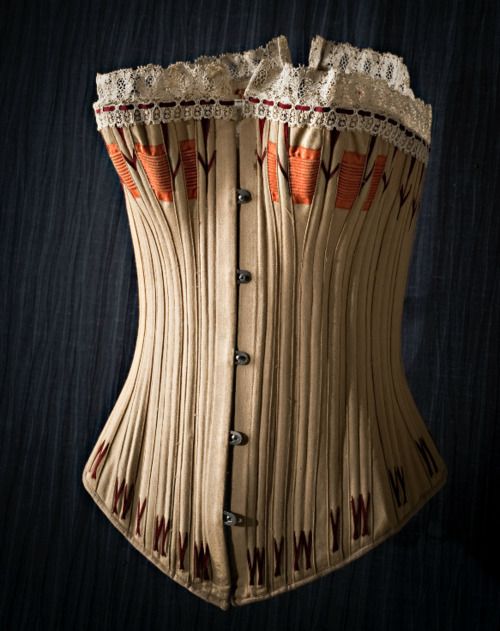 I decided to copy this method. Using small pieces of black taffeta, I stitched 15 thin cords onto the two front panels (on each side). As in the example above, I left the bottom and top piece of the taffeta uncorded.

I made a test piece first. cm next to it to see the tiny cords.

After that, I corded the actual corset panels. 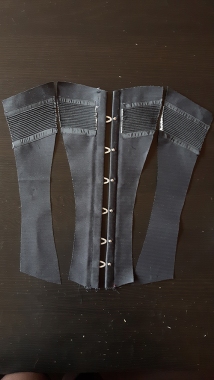 Construction was done after the cording, and was pretty straight-forward, I didn’t take a lot of pictures of these steps. All pieces were stitched with wrong sides together, leaving the seam allowances on the outside.

The boning channels were made from a cotton polyester mix, leftover fabric from my red spencer. The red with the black gives a lot of extra drama, and you do see contrasting boning channels in the 1880’s quite a bit, such as this yellow-black combination. 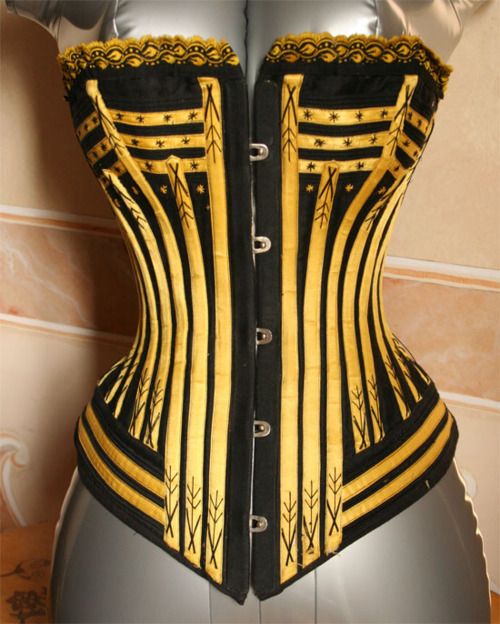 5cm wide strips were cut and sewn into tunnels with a 5mm allowance, creating 2cm wide tunnels. Those were then stitched on top of the (trimmed) seam allowances and stitched on in the center and to the side. This created space for 2 5mm wide bones (synthethic whalebone) in each channel. The center back also has a facing, creating 2 layers for the eyelets and an extra channel next to the bones. I also added one more boning channel for 1 bone next to the eyelets. Both this one and the center back were flat steel bones for extra strength. 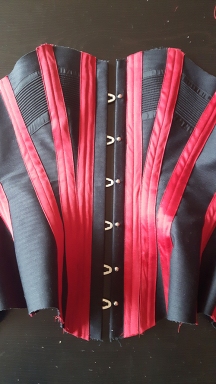 After the boning channels the boning was cut, the edges molten (plastic is so much easier to finish than steel!), and inserted into the corset. The binding was machine stitched on, I used regular black cotton bias tape.

The final big step was the flossing. I love the fancy decorative flossing you see so often in the 1880’s. I looked around for inspiration, and eventually settled on the design of the corset below. I like the flowers, and how it covers 2 bones. 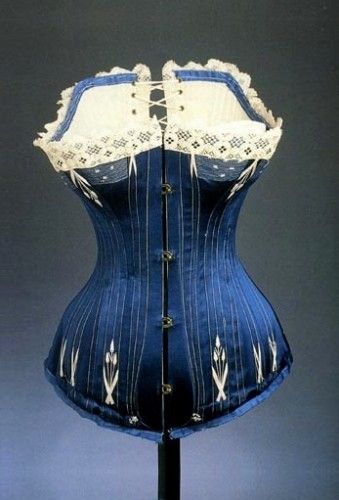 I made a little prick-template so I could place dots on strategic places of the embroidery pattern. This way, all the bones will have the same size and proportion flossing. I adapted the pattern slightly to also floss the single bones in the center back.

Before you begin flossing it feels like you’re almost done, but I think the embroidery might’ve taken as much time as all the rest of construction… I did 20 double bone motifs and 4 single bone, the double bone ones took about 25 minutes to complete each. And that’s without the test sample.

But, it’s done! I’m really happy with how this came out and I really love the shape. If I ever find some narrow antique black lace I might decorate the top, but as I don’t have that in the stash for now I’m calling it done.

The front and side: 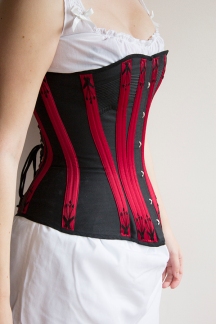 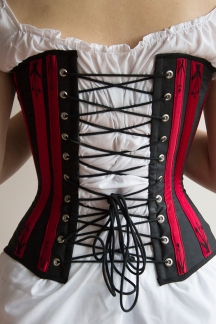