I’ve been brainstorming about making a burgundian gown from my brocade silk. With the brainstorming came some research. I’ve never done anything before 1800 before, so 15th century is entirely new.

The burgundian gown itself is fairly simple to figure out. It either has loose or fitting sleeves, a full skirt and a collar. The back often shows that the collar also runs in a v shape in the back. The dress is fitted around the bust and looser underneath, worn with a belt to fit it through the waist. Different variations exist, in the exact shape of the neckline, the fullness of the gathers and the sleeve shape.

It gets a little more complicated when looking at what’s worn underneath. Most medieval dresses seem to have both a linnen shift and a kirtle underneath. A kirtle is basically an underdress and can either have short or long sleeves. It can also be worn on it’s own, or layered. Most kirtles lace/button in either the front or at the sides. 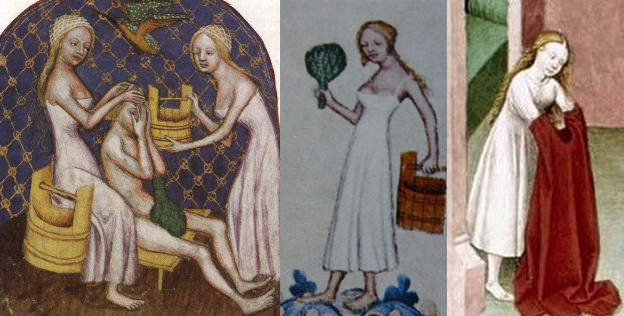 Shifts, with straps or sleeves

Kirtles. Side-laced left, front-laced right. Either with long or short sleeves. Separate sleeves could also be pinned to the short sleeve of the kirtle.

That’s where it gets interesting. One would think (this was my original thought as well), that both the placket in the v and the underskirt would simply be those of the kirtle worn underneath. Side-lacing ones when you don’t see lacing, front-lacing ones when you do. And maybe they are in some occasions, but often in paintings you see a different color underskirt than placket. The big question therefore is, how would this work?

All of these show a different color placket than skirt underneath.

I’ve done some googling, and from what I can find there are a few different theories. No one is conclusive, as so little original material exists. Images of women dressing & undressing exist, but are not all that common. No images I’ve seen are really obvious. These are the different theories, I’ve provided a link to the pages where I first read about each of them. (Ergo: none of these are my own, so I don’t take credit for any of them)

1. There’s a simple square/triangle of fabric pinned over the kirtle along the neckline. (Theory credit/where I first read about it)

The page where I first found this has an image about this as well. I should note that this person has since moved on to theory nr. 2.

2. Two different kirtles are worn. One below with a high square neck, one on top with a lower neckline. This way you see the bottom gown in the v neckline but the top one when raising the skirts of the burgundian gown. (Theory credit/where I first read about it)

Supported by these images, depicting several stages in a story. Left you see the red kirtle and first gown with black collar and lacing in front. In the second image, she wears the burgundian with blue collar on top of the one with the black collar. This way, when lifting the overskirt you’d see the laced gown(black collar), not the red kirtle. I do have to say I’m not 100% convinced by this image, as the belt also changes color from left to right image. It might just’ve been an inconsistency in coloring by the artist. Nevertheless, it’s a valid theory and layering dresses seems to’ve been quite common.

3. There is a piece of fabric attached to the burgundian itself. Connected on one side of the v, pinned shut on the other side.  (Theory credit/where I first read about it)

This sounds logical as well, but somehow doesn’t seem as plausible to me as the other theories. The author of this one preferred theory nr. 4 herself, also because of some of the evidence for that.

4. There is some sort of ‘wrap’ bodice worn on top of the kirtle. (Theory credit/where I first read about it)

Inspired by these images. On all of these, there seems to be a very short bodice worn. In the leftmost image, you can see where it stops around the waist. In the second image, you see something is covering the lacing at the top. In the third image, you see the black ‘under-layer’ stops just below the waist. The glimpse of white at the sleeves also suggests this doesn’t have sleeves.

The author of this theory gives some more ideas on this, just follow the link above to her page to read more.

5. Skirt theories. There’s a separate skirt underneath the kirtle, there’s an under dress with a different skirt/bodice fabric or the skirt of the under dress has a broad border of different fabric.  This seems a bit less likely, as even a waist seam was pretty new in the late 15th century. It doesn’t seem so likely that they would’ve made completely separate skirts, or skirts of a different fabric than the bodice. The border you see on outer dresses as well, but none as wide as would seem necessary for the effect you see in paintings. (Theory credit/where I first read about it)

6. Final options would be that two under dresses were worn, and both the burgundian and upper under dress are lifted to show the skirt of the dress at the bottom. Although it’s likely that more than 1 under dress was worn at times (as shown by paintings with different skirt layers), I’m not entirely convinced. It seems to make most sense to just lift your outer dress, to grab 2 layers and leave the 3rd just seems a bit too fiddly to me. (Theory credit/where I first read about it)

I quite like the 4th theory myself. I want a black silk placket under my burgundian gown myself, but I already knew I wouldn’t have enough fabric for a full kirtle. This solution seems more ‘stable’ than theory 1 or 3, but still requires little enough fabric to make it feasible for me. That means I’ll probably make a chemise, kirtle, placket/bodice, burgundian & headdress for this project. Whenever I get started on it, that is.