Beginning of this year, a friend of mine found a sweater in a modern shop which looked remarkably like a 1890’s sports sweater. It’s not quite perfect, but it definitely mimics the look. I debated about it, but in the end I couldn’t resist and followed her example and got one as well.

An original sweater from the MET ca 1895

I’ve had the TV299 pattern for a ca. 1900 split skirt (bicycling/riding) for years now and never had a good reason to make it, but I now needed something to wear with the sports sweater, so it was perfect! Although dated a bit later, I found some earlier examples of similar split skirts, so I called it ‘close enough’.

I knew I really wanted wool for this project, and preferably a plaid. In the end, I found this beautiful brown fabric, which has hints of green, blue and red running through. It was just a little thinner and drapier than I was hoping for, so I chose to interline it with unbleached cotton to give it a bit more structure and volume.

The fabric, this picture probably shows the colors best

Shosing the interfacing when I was hemming. The bottom has a brown cotton hem facing. Because I made it bycicle length, and I didn’t want the white cotton to show when moving.

I tend to use patterns as inspiration and basic shapes, changing things as I go and not follow instructions. But for this skirt, I actually stuck with the pattern very closely. Technically, this is a pants pattern. It looks like a skirt, but it’s pants with really wide legs and strategic pleats. So it’s a little more complicated to me than skirts or bodices, as the only ‘pants’ I’d ever made were split drawers. Not quite the same. (What’s complicated depends on experience, pants patterns scare me much more than corsets).

The pattern went together quite well (when I was paying attention), the only thing I had to read a couple of times were how to fold the back pleats. It worked out as I was doing it though. My only nit-picky comment would be that because you sew the buttonholes in the front leg through 2 layers of fabric (basically in the pleated part), that bit becomes quite difficult to hem at the end. If you want your final button hole close to the bottom, I’d actually advice not stitching that when the pattern tells you (before construction), but leave that one to last (after you’ve hemmed everything). The only minor thing I changed was to take in the side/back seam a bit and widen the darts in the side, as I picked a size based on hip measurement (as advised), meaning I had to make the waist smaller by 3 inches. That worked quite well though! I was a bit scared because of all the pleating, but the relevant seams are not pleated, so I could check for fit quite well.

I’m really happy with how this turned out, and love the fabric with this style. All the buttonholes (20…) were a bit of a chore, but they do add that little extra interest.

Button holes & buttons on the opening.

Making this in the shorter bicycle length means it actually reads quite modern! I didn’t necessarily plan this beforehand, but by now I’ve already worn it in daily life a couple of times!

When visiting the museum!

I also wore the split skirt with the sweater to a photoshoot day. I made a beret to go with it the day before as it does really call for some type of headwear. I’m very happy with how this look turned out! It’s fun, but also very comfortable and easy to move around in. 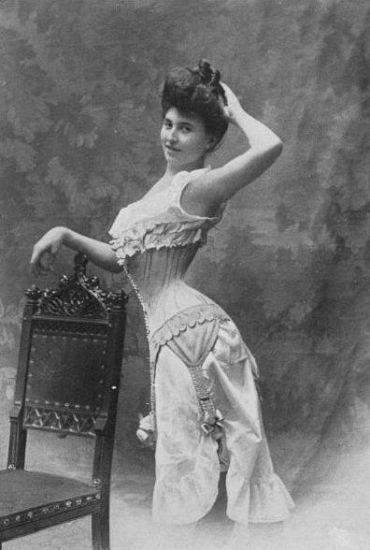