For my 1890s project I decided I want 2 new petticoats. I have an Edwardian petticoat which is too slim for 1895, but which is usable as a ‘bottom’ petticoat. The second petticoat would build the right shape, and the final petticoat I’m planning to make with the same pattern as the skirt and make in more fun fabric. That one is to really get to the wide shape of the period. This post is about the second, so the middle petticoat! This is how it turned out: 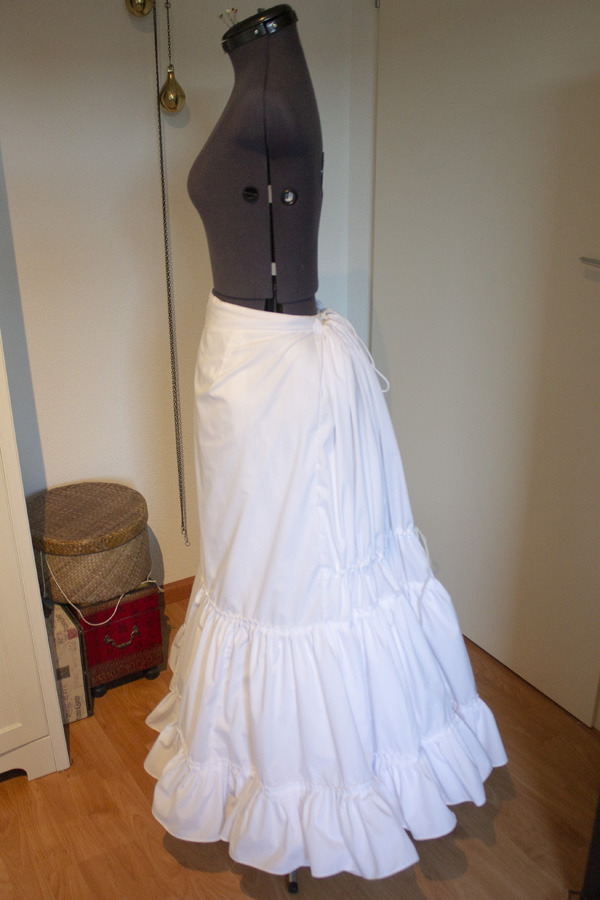 After getting some white cotton I  started looking for patterns. I browsed trough the 1894 to 86 issues of the Gracieuse, and eventually found this petticoat:

There was a tiny pattern on the pattern sheet. Way to small to read any text, but enough to get a feeling for the shapes. I figured that the front and back would be cut on the fold, and that the horizontal line through the back and side panels would be where the gathering happens. I ended up not using the dart in the side panel, as that piece is gathered on anyway.

My first step was to translate it to roughly the right length and width. For the length I just measured how far I wanted it, for the width I used the placement of the front-side seam. In the picture you can see that this is just slightly further than halfway around the body. This way I could figure out the width I wanted the front panel, and increase the size of the others similarly.

My first step was to take some notes and measures:

For construction, the first step was to cut the main skirt shapes, and sew them all together. The front panel has two darts, and has a yoke as waistband. 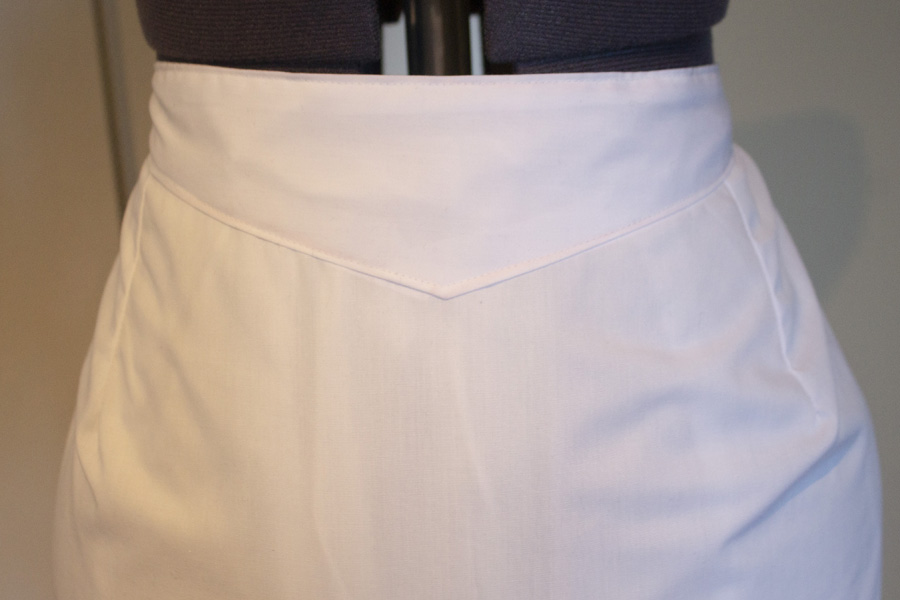 The side and back are gathered to a waistband which is itself a bit larger than the waist circumference. The waistband then encases a string (starting at the seam between front and side panels) which ties in place center back. 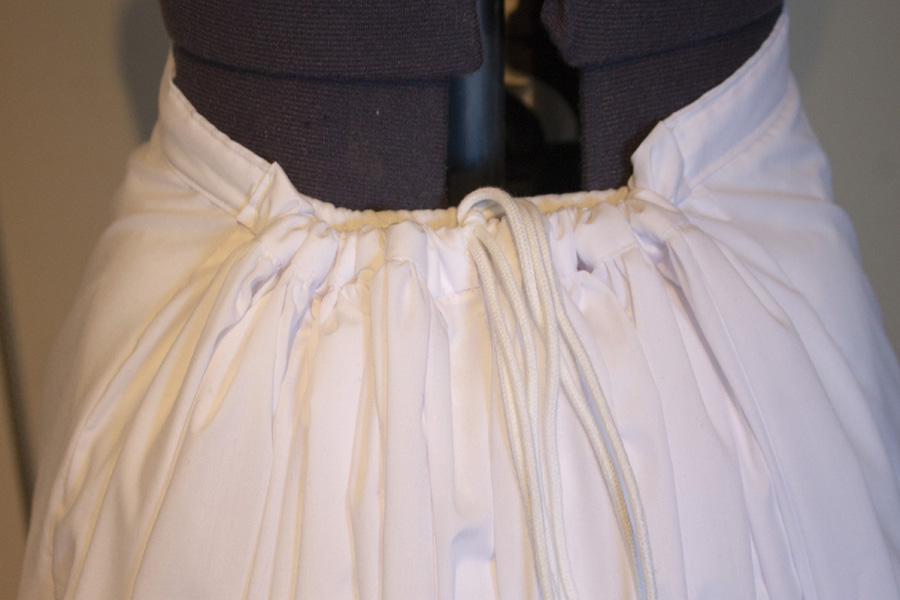 On the side and back panels, a piece of cotton tape is stitched on, encasing another cord (again starting at the seam between the front and side panel) which ties center back. Pulling this in keeps the width of the skirt towards the back, and the front smooth. This is quite typical of the skirts of this era. Though very wide, the folds are in the back. 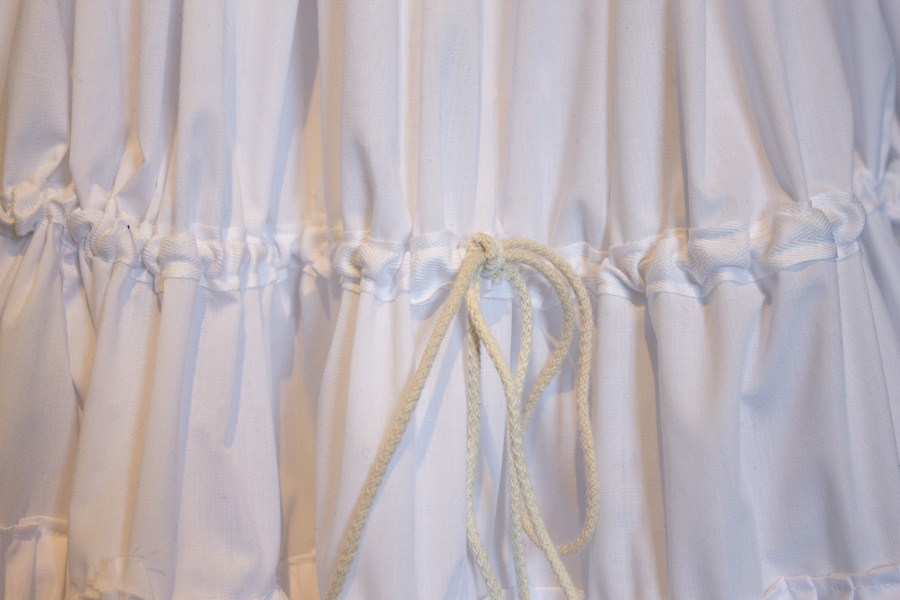 For the ruffles, I cut one strip 42cm high and one about 16cm high. All ruffles were hemmed with a rolled (machine) hem. This took a while. The small ruffle was about 15m long, the other one about 7m. 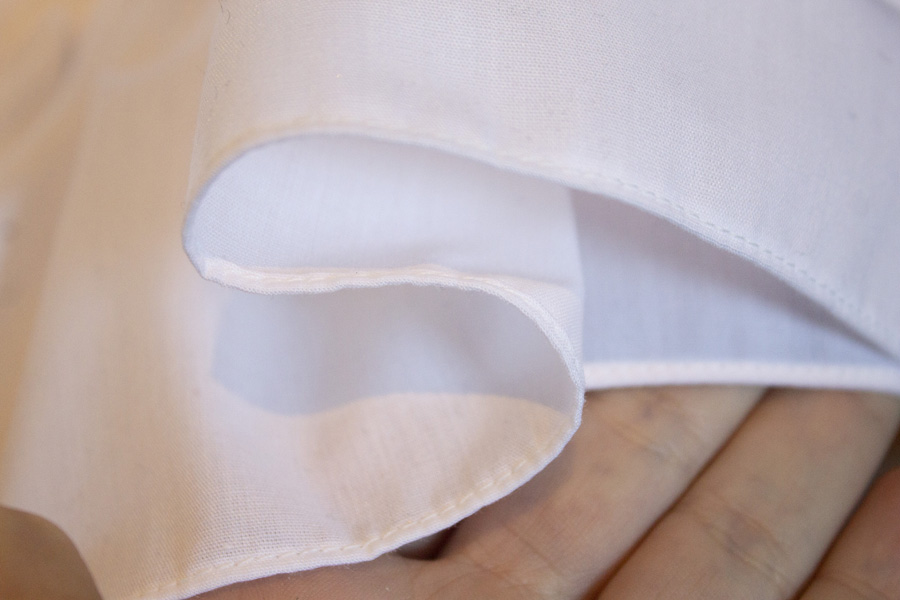 I used my machine pleater foot to sew the small ruffle to the large one, and the large one to the base skirt. Before sewing, the top was simply ironed over about 1cm. In retrospect I cut too much ruffle fabric, as I didn’t really calculate the ratio beforehand. There’s plenty on the skirt though, and I can easily re-use the rest as linings later.

And this is how it looks finished! I’ve put it over the old Edwardian petticoat to properly show what the shape would be at this point. It’s starting to show the typical A-line shape with fulness in the back. The final petticoat will serve to make the shape even more extreme. 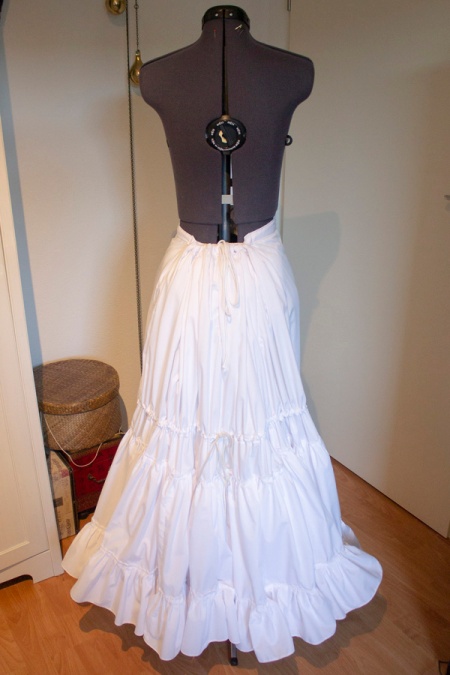