Earlier this year I was travelling, and looking for a project to take with me on the trip. As my regular projects are rather a hand full, I decided to try my hand at embroideriy.

I’d been wanting to make an 18th century pocket for a little while. I currently use a very functional, and very ugly black pocket I made very quickly years ago. It works, but having admired other people’s embroidered pockets, I wanted something prettier. As embroidering a pocket takes some time, yet is all hand work and small enough to fit in a carry on, it was the perfect project for a trip!

I really enjoyed working on the pocket, and finished the embroidery soon after I got back. So when I had another trip shortly after finishing the first, I decided to make a pair! 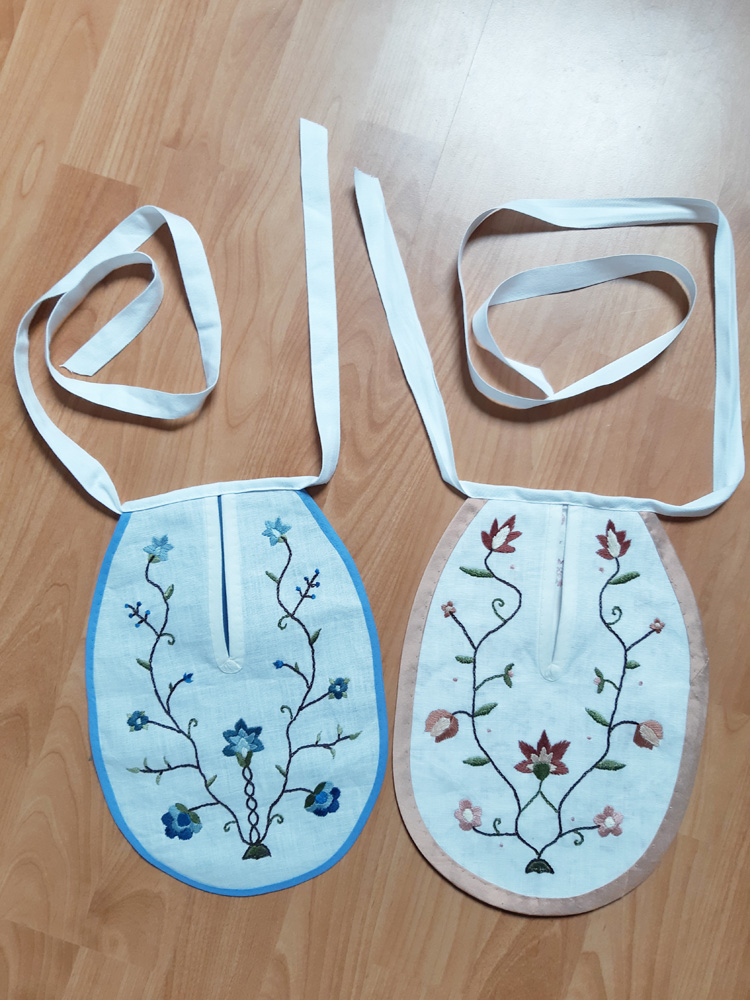 This was my first try at ‘real’ embroidery, although I had done corset flossing before. Because of that, I saw this mostly as a practise project. I drew the designs inspired by originals, but not really copying anything. The first (pink) pocket was sewn from colors I already had, the second one I ordered colors for.

During the trip, I kept my materials in this lovely antique cardboard box. 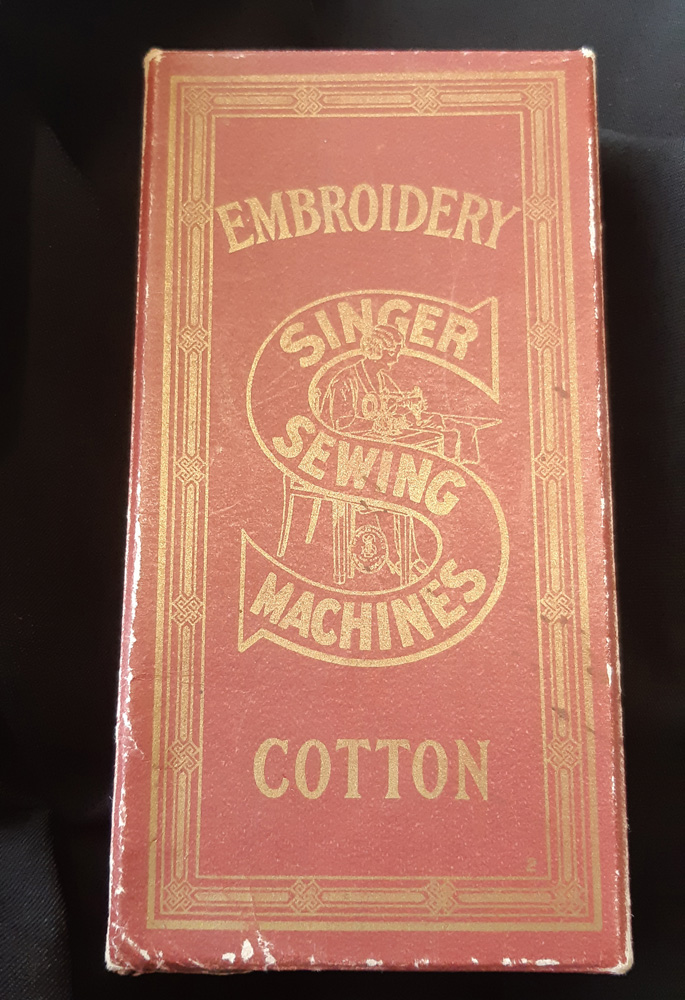 Both pockets were started at the airport. The branches are done in chainstitches 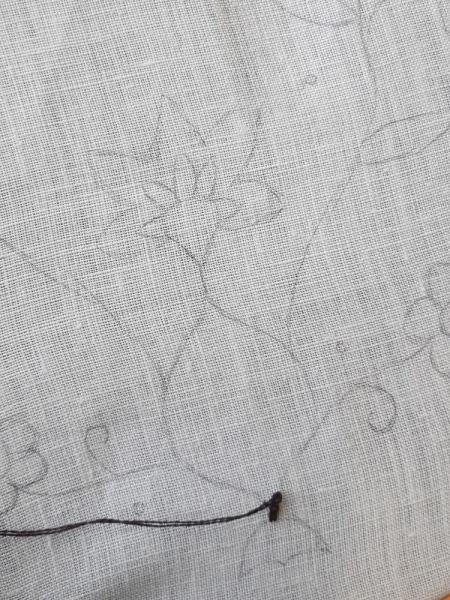 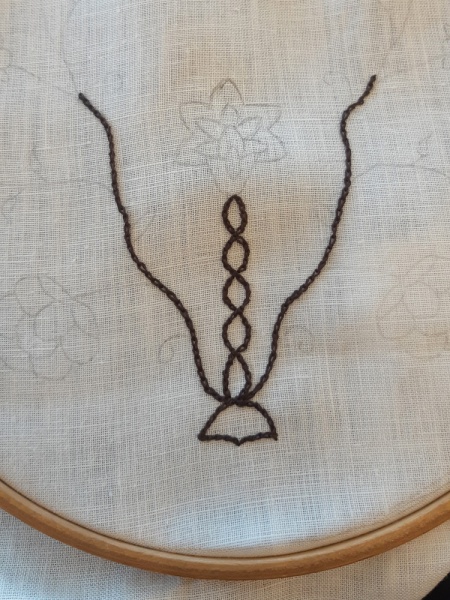 I worked on both pieces during flights, and during the stays at times. As both were solo trips, it was nice to have an activity for during tea, lunch, or slow evenings. 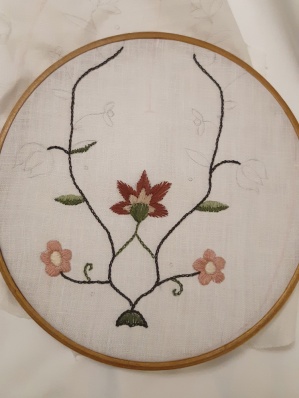 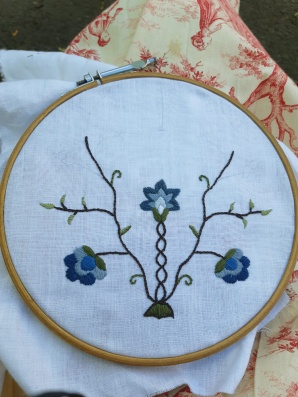 The embroidery was done on linen. After finishing, I constructed the pocket (also by hand). The finishing was done completely with whatever I had laying around. 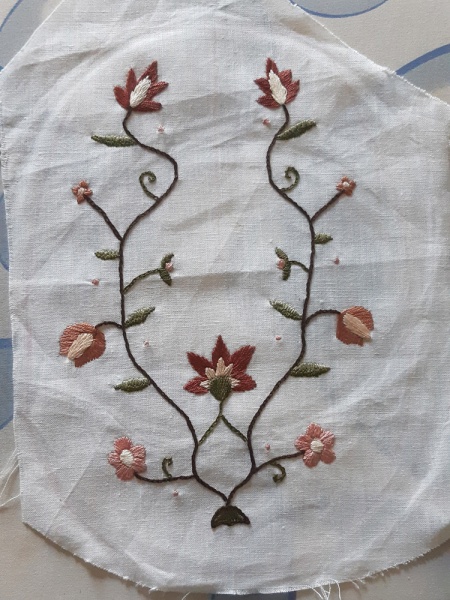 The pink one has a back from Ikea cotton, the blue one a scrap of blue cotton. Both are bound with left-over pieces of binding.

The binding was stitched on with small stitches, but actually came together quite quickly. The slit was bound with white bias tape on both. 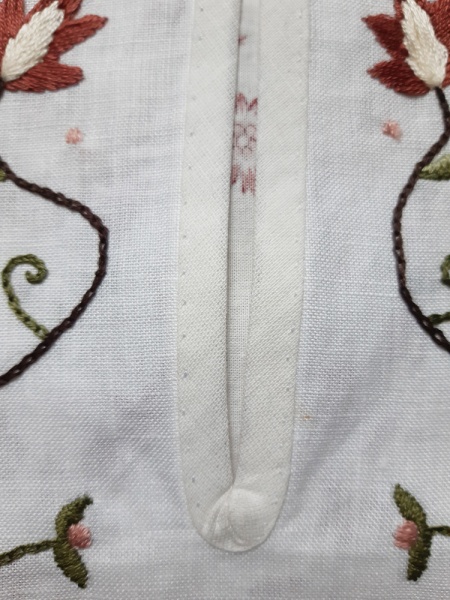 The second pocket was sewn together on a train, continueing the travel tradition. It took about 1,5 hour start to finish. 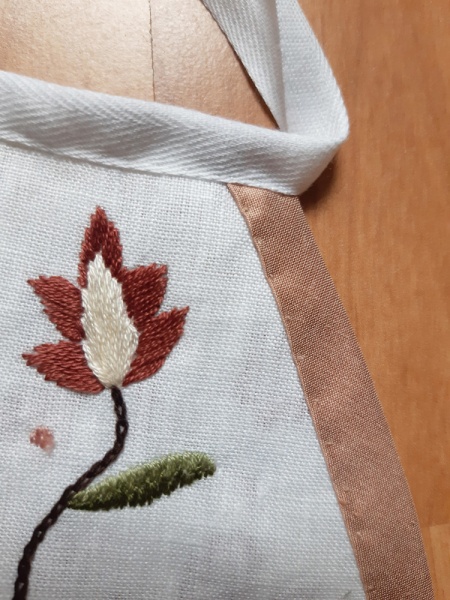 I decided to make two separate pockets, instead of attaching both to the same ties. This way I can choose to wear just one, and am a bit more flexible on positioning when wearing both. 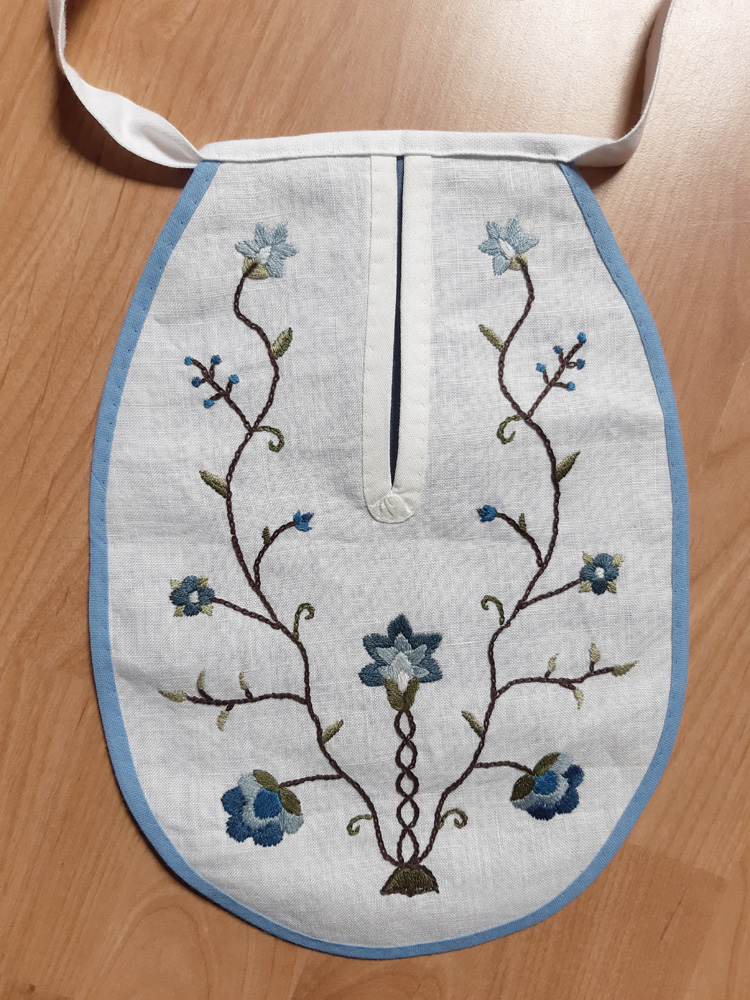 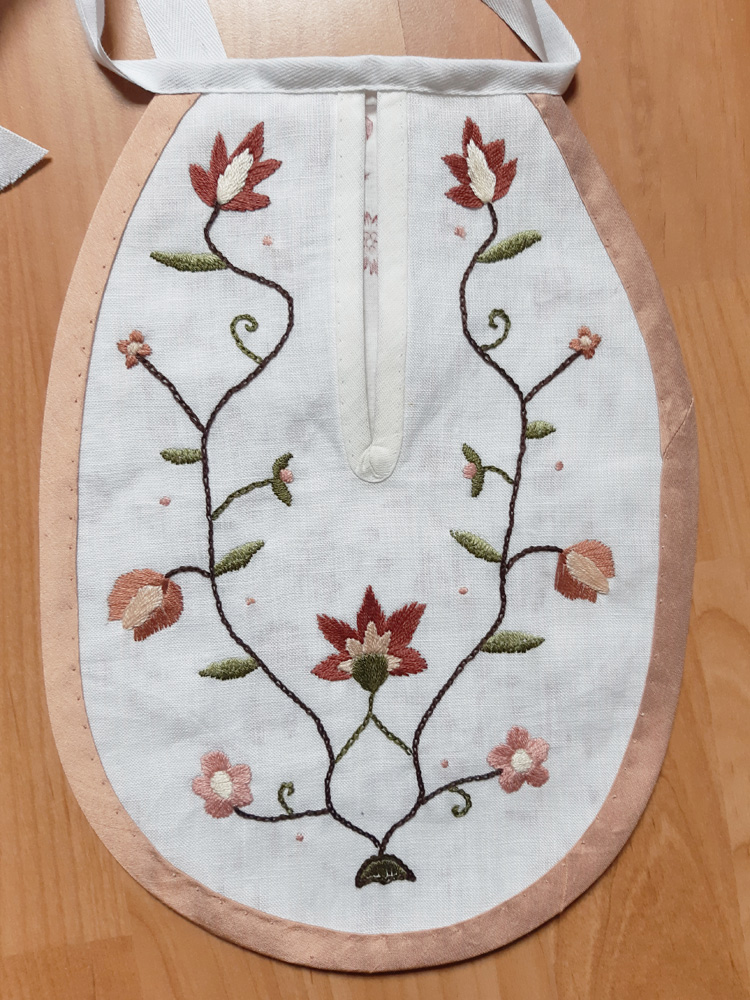 To finish up, some closer looks at the embroidery! It’s definitely not perfect, but I’m pretty happy given that I’d never done either a chainstitch or a satin stitch before. 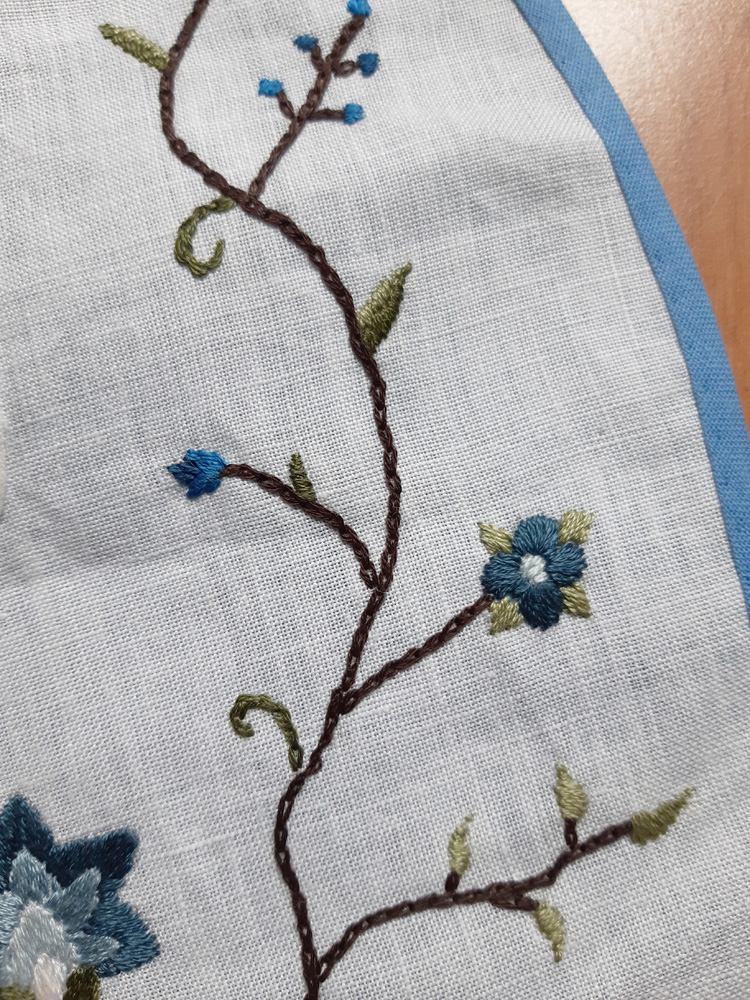 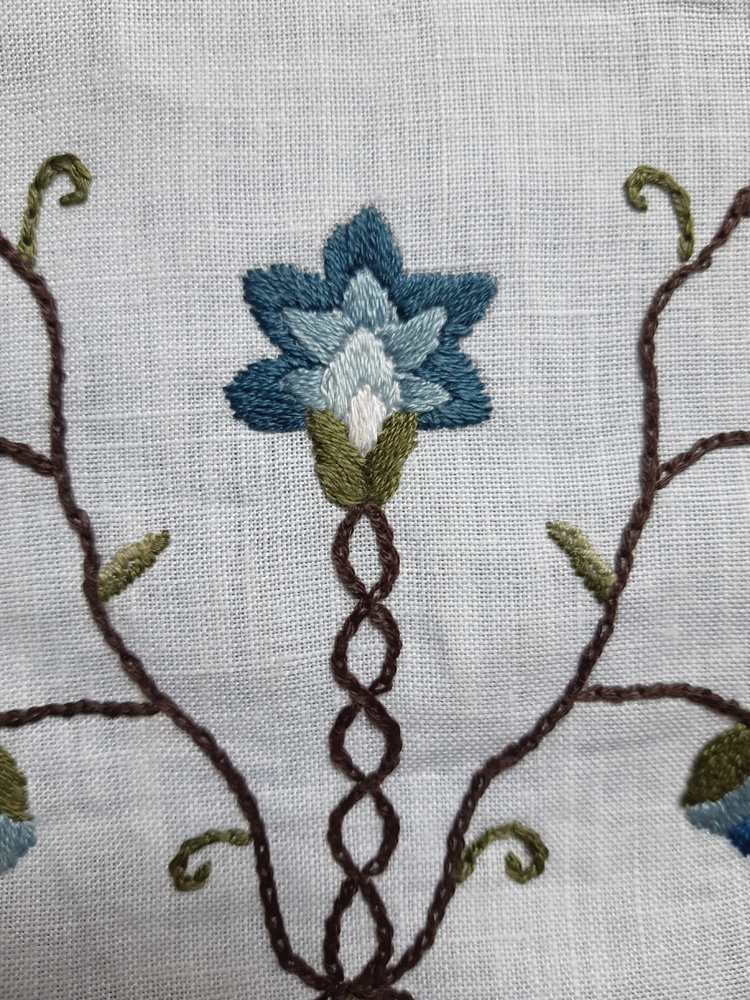