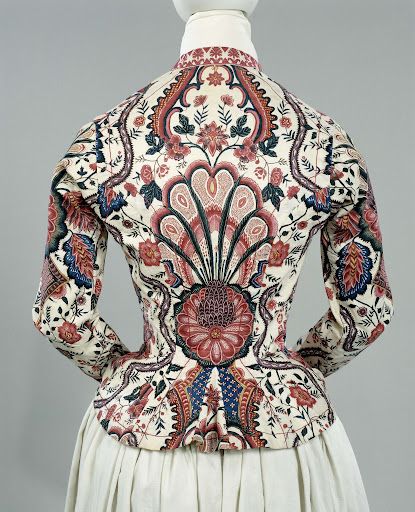 It’s been a while! Right after the fancy dress ball, I dove into a new project. However, it’s not quite done yet, and I’ve been away from home for a couple of weeks, so nothing finished to show off yet. So this post will be about some of the inspirations instead!

I’ve been working on an 1880’s tennis dress. This dress started with the realization that I only owned silk, wool and velvet Victorian dresses. Which are fabrics I love, but they’re not ideal for warm summer days. So I set out to remedy that, and when looking at possible designs for cotton bustle dresses (as I love the 1880’s), I stumbled on tennis dresses.

This is one I’ve always really liked in particular: 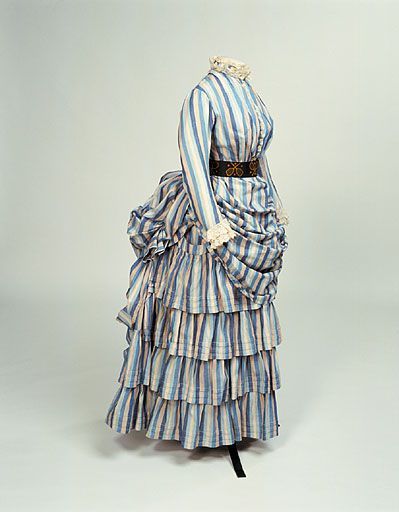 But there are some other great existent examples, such as these: 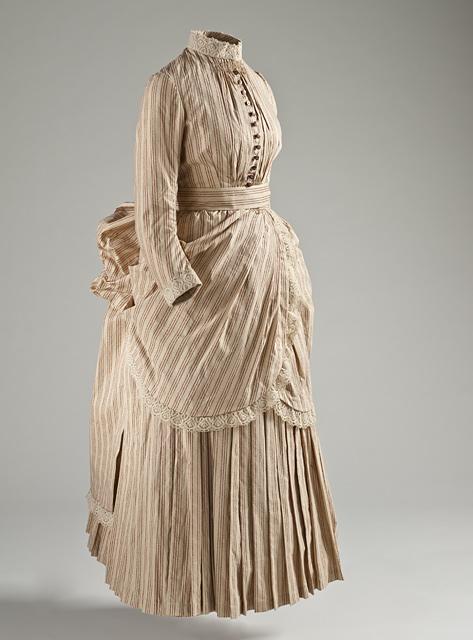 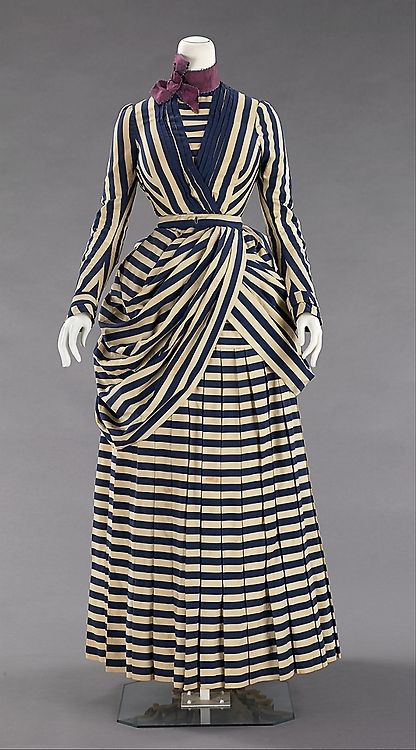 One of the questions I had initially, was what makes these dresses tennis dresses, and not just cotton bustle dresses? Partly, it was probably just that they were made with a specific purpose in mind, but looking at these garments more closely does give some more clues!

The first thing (which I know is a feature of the first two of these dresses, although I’m not sure about the third), is that the boning which creates the bustle shape is actually a part of the dress itself.

This is a feature I first ran into in Izabela Pitcher’s book ‘the Victorian Dressmaker’. She has a yachting dress which features boning in the skirt. The dress from LACMA actually has pictures of the boning structure, and for the Manchester Art Gallery dress you can read about the boning in the description. I’ve also seen this being mentioned for light cotton summer dresses. 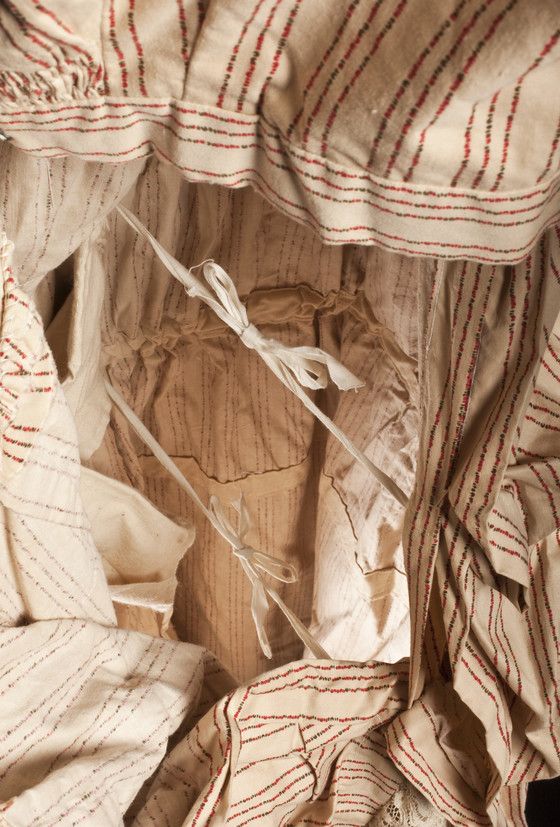 The inside of the LACMA dress, showing the boning and tapes to create the bustle

This inclusion of boning in the skirt means that the outfit does not require a separate bustle case, nor a petticoat to go on top of the cage. Although you might still want one petticoat to go underneath, this definitely does cut out at least 2 layers of skirts, making the whole thing lighter, and probably easier to move around in. The Manchester dress even sports an apron in one with the main skirt to reduce layers, and a back overlay which is buttoned on. So the goal definitely seems to reduce weight! This is my own theory, so I am curious to find out if I can feel the difference when wearing the finished dress!

Another feature the tennis dresses seem to have are special pockets to keep the tennis balls in. Although bustle dresses feature pockets more often, these are definitely shaped and sized for tennis balls. Pleats are a popular choice for trimming, otherwise the dresses are relatively simple, with just a little lace. All these examples also feature a bodice which has extra fabric in the front, and which is gathered into a band which sits at the natural waist. Pictures of tennis dresses do show other types of bodices, although the ‘looser’ gathered look does seem to be the most popular.

Some pictures of ladies in tennis outfits: 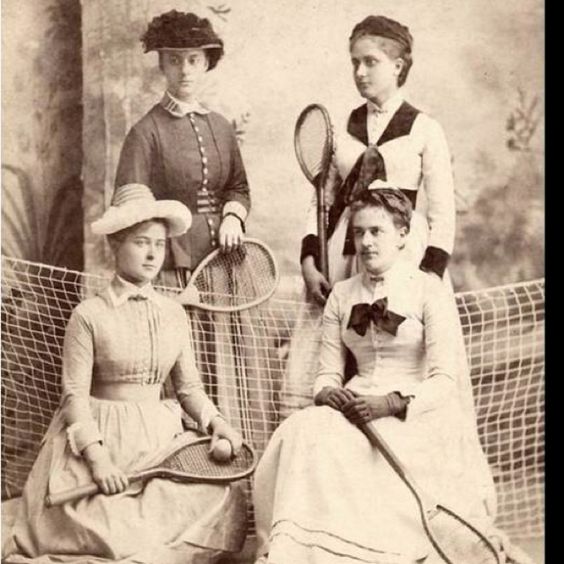 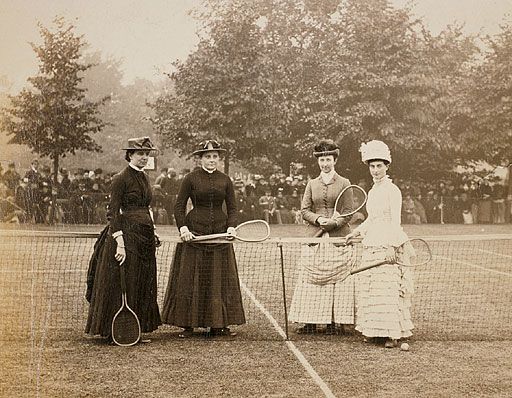 Finally, there’s of course the little references to tennis, such as the embroidery on the belt. These three examples are all made of cotton, although different fabrics such as light wool could probably also be used. And they are all striped! When looking at pictures and prints, you see that most dresses are light colored, and either a solid color or made in stripes. 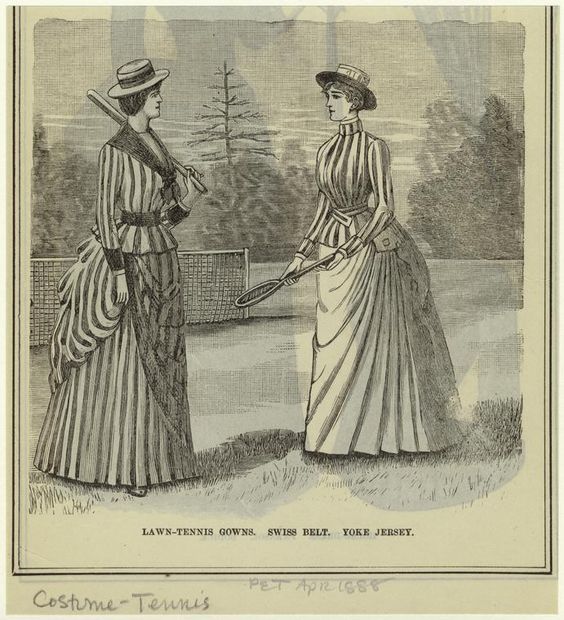 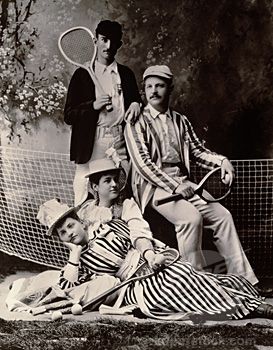 The stripes weren’t just for the ladies either!

For my own dress, I’ll be using the Manchester dress as main inspiration. It has a very good description on the website, although the pictures don’t show the back. Main features will be: bustle cage included in the skirt, gathered front bodice, apron sewn in one with the skirt and separate back drapery, a ball pocket, pleated ruffles, and striped cotton fabric!

I’ve now got most of the skirt base and bodice together. It needs some finishing (closures, hem, etc), and then all the ruffles on the skirt. Here’s a little glimpse of the fabric, and the gathered channels which hold the boning for the bustle in the skirt.

Finally, I also found this lovely article, which has some more info on tennis dresses in the period, including some original source quotes!