The ball is held in the opera of Ghent, in a beautiful baroque style room. This year, there was a dance workshop in the afternoon, which we went to as well.

After the workshop, it was time to eat, and then prep for the evening! I started on my hair, as I’d never done 1830’s hair before. I tried to photograph the process, maybe it’s helpful!

As I don’t have any hair shorter than hip length, I used fake hair for the side curls. This is such a typical thing for the era, I didn’t want to do without. These are real-hair extensions which I modified, and I’d curled them with rollers (wet-set) before.

My other piece of fake hair was a very long weft. I used this to supplement the braid. Although my hair is very long, it’s not very thick, so I can usually use a little extra volume.

Firs step was making the typical v-shaped parting. I then put everything up in a very high ponytail.

Next was clipping in the front extensions. I then took two pieces from my ponytail and made two small rope braids, which go over the line of the extensions to hide them. (A quick note: this took a lot of fiddling and even more pins, I really want to find a quicker way to do this…)

The front done, I pinned the weft into my ponytail and braided the whole lot. I then wrapped it into a bun, taking care to wrap the second time on top of the existing braid to create height. I then hid the ends and elastic inside the bun.

And done! To finish it, I clipped in two huge flowers to the side of the bun. For another tutorial (including the famous loops), my friend Nikki has a wonderful tutorial on her youtube channel here.

The ball itself was really nice. There was a lot of dancing, and swooping crinolines. I quite liked my corded petticoat, it was definitely easier to dance in than a hoop!

In-between dancing there was social time with friends, taking pictures, and just looking at all the other lovely people. Some pictures!

The golden girls, with Josselin (my partner in crime for the weekend) and Corina. Gold was quite a popular color in this era! I love how we’re slightly chronological, early 1840’s, midway 1830’s and early 1830’s.  (It shows beautifully in the hem length!)

We did a 1830’s group picture at the end. It took a while to get us in order, but eventually we managed to behave.

Some more pictures of my finished dress 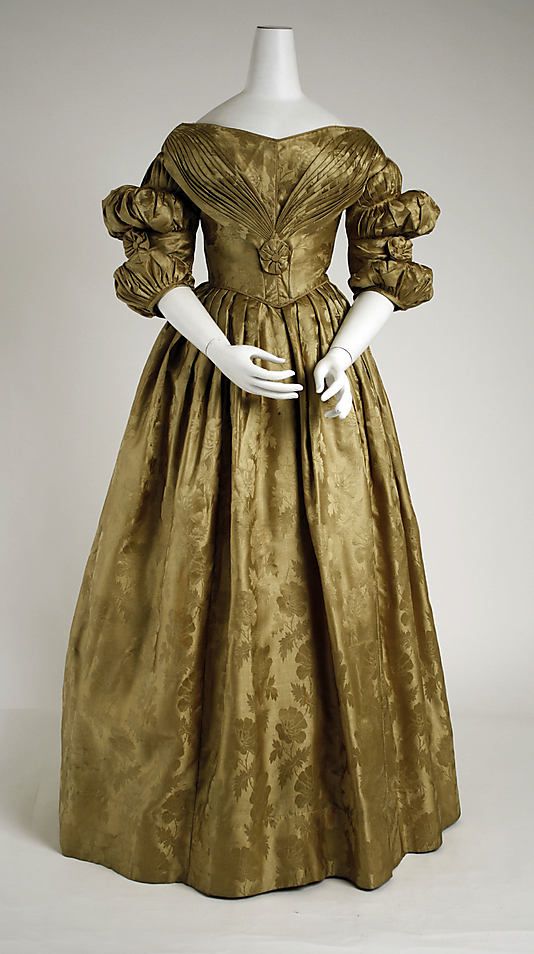 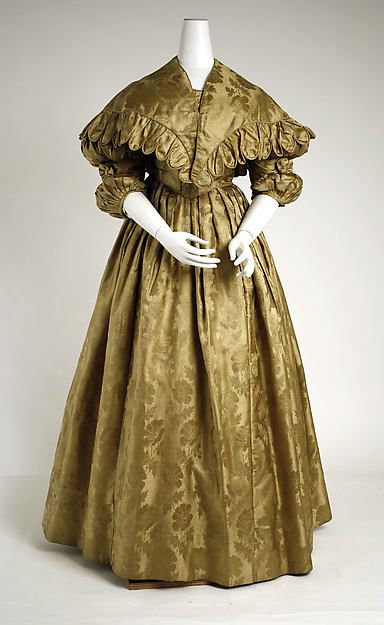 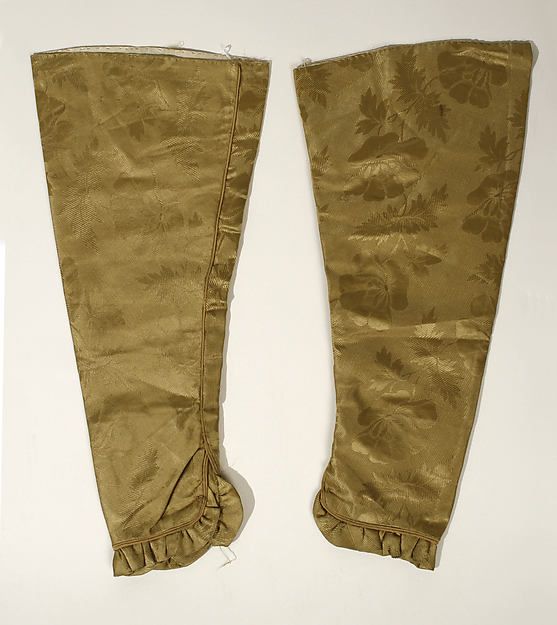 With looking back, there’s also time to plan new things!

As per usual, my plans mostly focus on the first half of the year, and are centered around events.

First up is the new-years ball, with theme 1830-1860. I figured that this would be a perfect excuse to finally make that 1830’s dress I wanted to make. The dress is mostly done now (which is good, as the ball is in a week). I do need to add some finishing touches, first priority is to get it wearable for the ball! (No tacked down allowances needed for that 😉 ).

A little peak at the dress

After that, I’ll start sewing for a Victorian Fancy dress ball in April. I really love the idea of this ball, and my idea for a dress is mostly based on what I have in my stash. I have a purple/gold changeant silk organza, which is very lovely, but also very purple, and not very period looking. It’d be perfect for fancy dress though.

I love the shorter skirts you sometimes see in fancy dress costumes, and I’ll be going for an 1880s look. Probably some fairy/queen type of thing, hopefully with gold flowers all over. 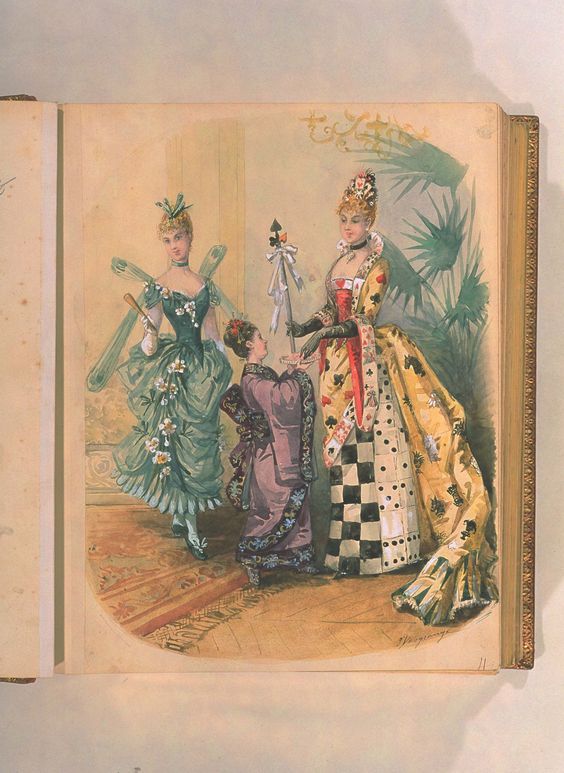 The lady on the left is one of my inspirations. I might make a change or two to the drapery etc, but the silhouette and flowers is what I’m going for.

I have one more event planned so far, which is a Regency ball, but I’ll probably re-wear my red/white dress, or my blue/silver one for that. The final plan I have is related to the Victorian picnics I’ve been organizing. It’s a pretty low-key event, but a lot of fun and good excuse to dress up. I found out last summer though, that all of my victorian costumes are either silk, velvet, or wool. Not the best for hot summer weather. So I really want to make a cotton bustle dress, and I have my eye on the tennis style dresses you see in the 1880s. 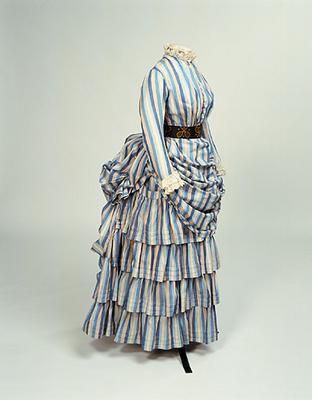 I love this one, it’s relatively simple, yet a lot of fun.

For the second half of the year, it’ll depend on events again what my plans will be!

I had few concrete historical costuming plans at the start of this year, mostly planning underwear and accessories. Those plans were the 1660s shift, 18th century stays, and the steeple henin. Those all got done, so that’s good! I didn’t do so well with my modern wardrobe, as I planned to make 2 dresses, but only got half-way on one.

Looking back at what I did make, it’s mostly underwear and accessories. I made two shifts, one pair of stays, one corset, one false rump, one corded petticoat, three 18th century petticoats, a fichu, a hat, and a henin.

For outer garments, I only really finished one piece; my 1780s silver dress. But honestly, given that it was sewn all by hand, and how busy last year has been, I’m pretty happy with it. It wasn’t rushed, and I didn’t take short cuts, which usually lead to regrets. It took me half a year to sew, but I really enjoyed making and wearing it. That definitely makes it worth it, although I’m not yet planning to make everything entirely by hand in the future. I’m also really happy with how the whole look came together. I made quite a bit of underwear and accessories for this dress, and for my first attempt at the 18th century, I think it came together quite well!

At the Winterball at D’Ursel (picture courtesy of Irina Krutasova)

However, when thinking about this year, what really comes to mind is not the costumes I made, but the events I went to. In 2017, I visited one historical ball, and that was only the second one ever. I’d mostly been wearing my costumes to fantasy fairs. I did that in 2018 as well, but I also visited four historical balls, one salon, organized two historical picnics, and went to a conference. This was one of my big goals, and I’m so happy it worked out so well, as all of these were wonderful experiences.

A big bonus of visiting more events was that I got to know more people in the historical costuming scene, or got to know them better, which was so lovely. So thanks to everyone for making it a great year!