When I started my 1830s project (which up to now just consisted of a petticoat), I knew I also wanted a new corset.

I’ve got a somewhat slimmer corset which I’ve used for my 1870’s dress, and a curvier one for the 1880s. And I’ve got a pair of regency short stays, which actually act more like stays in that they ‘lift’ more than ‘separate’. For the 1830’s, the goal is a high, still slightly separated bust, though not as high as regency.

Most ‘typical’ 1830’s corsets are transitional, meaning that they are somewhere between the soft, cupped, corded regency stays, and the more waist-defining corsets of the 1840’s. 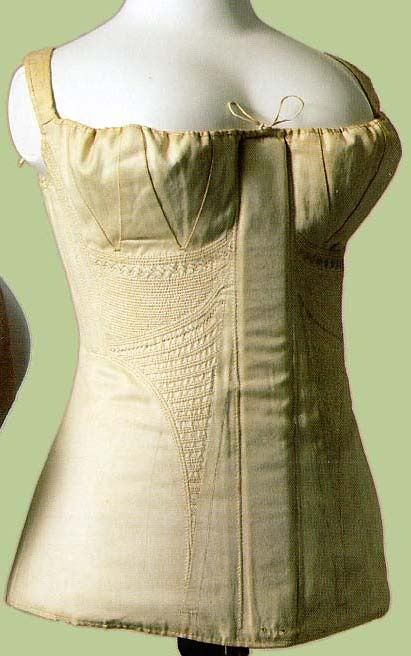 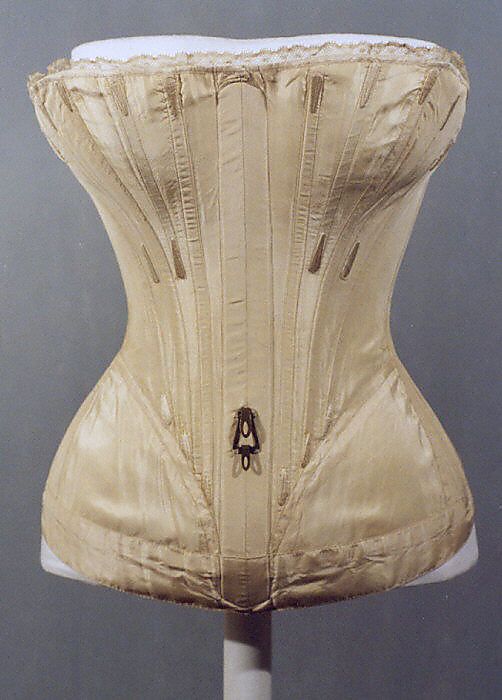 This was a very transitional period, so you get a lot of different styles which are a bit difficult to date. Many original pieces are dated something like ‘1815-1840’, so quite a long range.

Somewhere in the 1830’s, corsets start losing their straps, and gain a defined waist. This one is a nice example of the transition: 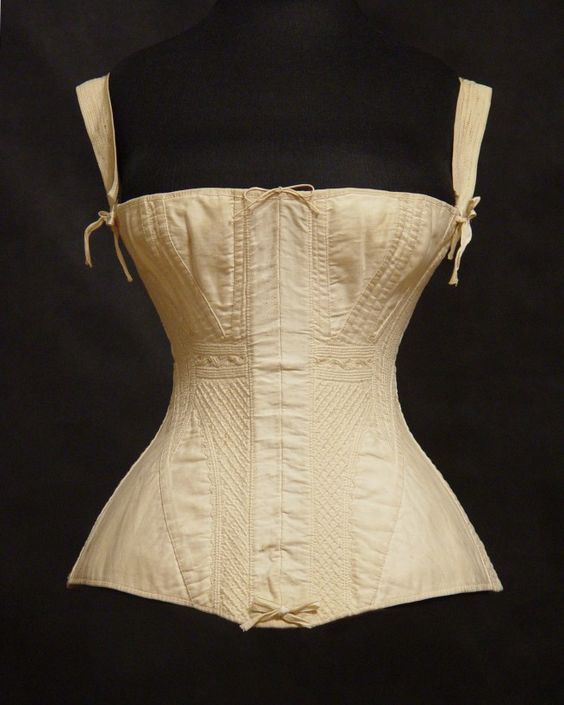 In the end, I decided to base my corset on the ca. 1840 example from the MET shown above. I did not want straps, as they can show underneath a dress. And I wanted to, ideally, be able to wear this corset for 1840’s, and possibly 1850’s stuff as well. The main difference is the waist definition which gets more pronounced, but a more pronounced waist is not a problem for an 1830s dress. The only other thing which slightly changes  is that the bust drops a little, but given my shape that would not really be noticeable. I also wanted a defined hip-spring, as I need a large difference between waist and hips naturally, so the more ‘straight’ shapes wouldn’t work very well on me in any case.

I chose to make one more concession to accuracy for practicality reasons. In the late 1830’s, all corsets had a wooden busk, and spiral lacing. The split busk was invented in the 1850’s, and with it came the ‘typical’ straight lacing you see on corsets to today. The split busk makes it a lot easier and quicker to get into a corset by yourself, so I decided to add one.

Technically, this makes my corset more like the 1850’s and early 1860’s styles, which are actually cut very similarly, but with a split busk.

Like this one, which has the same wide hip panel: 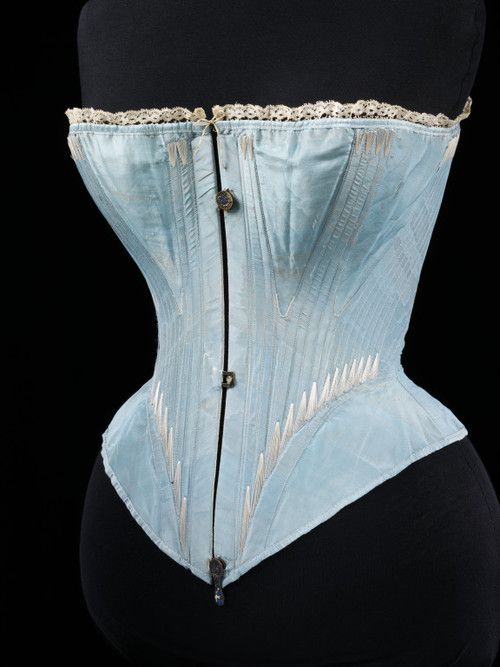 The 1840 one from the MET does not have bust gores, which is actually quite unusual for the time, I think. However, I definitely don’t need them (they’re mostly handy for larger busts), so that was not an issue. And I really like the ‘hip’ panel, as that gives a lot of room for a large hip spring. A final advantage was that this piece was photographed really well, so I could actually see where the seams were, and figure out what the panels should sort of look like.

I ended up drawing the pattern from what I saw shape wise, and then made a number of mock-ups to actually make it work for my body. It took some trial and error, and no very systematic process was followed, but I ended up with something workable.

For construction, I used two layers, one cotton canvas and one plain cotton. I first inserted the busk, and then attached both lining and canvas layer of the second piece to the first, at the same time. By laying the canvas layer on the canvas layer (right sides together), and the lining to the lining (right sides together), and then stitching the seam in one go, you get the seams ‘within’ the corset. This gives a clean finish, and provides extra layers as strength for the boning. I think this was also the way the original was finished, as it shows the same clean interior, and the top-stitching, although I cannot be sure from pictures alone. In any case, it worked!

I opted to cut the hip panel on the bias, to give some flexibility there, and just to experiment. I tried to see the grain on the original, but the weave of the fabric makes it impossible to see despite the high resolution. It does pull a bit, creating a bit of a wrinkle, so I’m not fully sold on this method yet, but otherwise it works.

It’s very curvy when just taking it off the body!

I did not really take many construction pictures, as the corset was made during quite a busy time, with low light in the evenings, but I’m actually quite happy with how long it took me to make. It’s boned on the seams with synthetic whalebone, plus two bones in the side/hip panel all the way down, and extra bones in the back, as in the original. I’ve got one steel bone to support the eyelets center back. 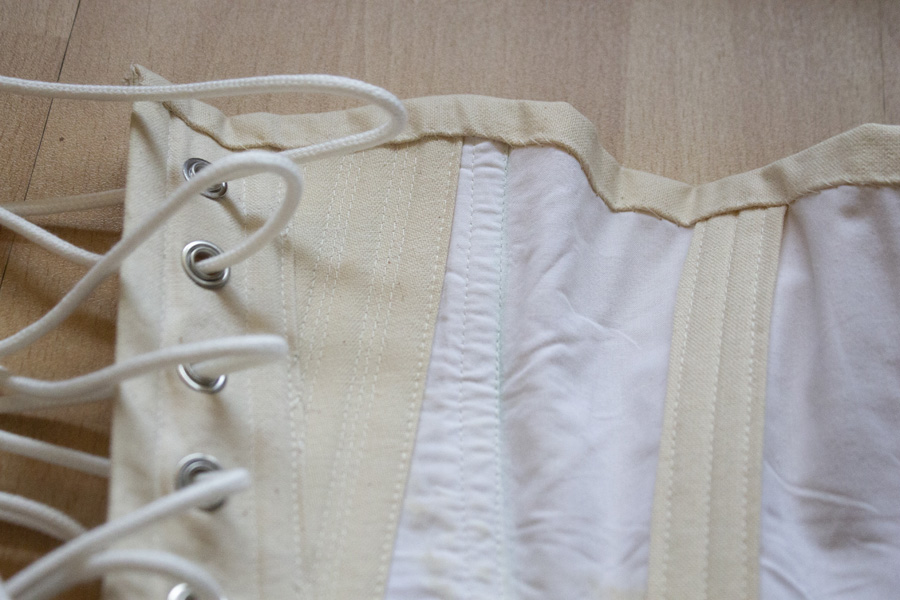 Diagonal bones in the back, and extra bone casing on the inside

It’s quite curvy, which is something I’m really happy about. I feel like this might be the first corset I made where I didn’t have too little room in the hips/bust in the end. I tend to underestimate the hip spring I need because I need to always increase this, and I tend to overestimate how much I need to take in the bust. But a corset works best if it actually leaves room at the top and bottom, and only reduces in the waist. This corset actually does that, which is nice!

A gore at the back to allow room for the hips

It’s not the prettiest thing I’ve ever made, being of quite utilitarian fabric, but it works, and the shape is good. I might floss it at some point in the future, but for now, it’s time to start looking towards actually making a dress to go on top! (Which, if you’ve been following my instagram, you’ve already seen some peaks of. It’s looking good so far!

Some pictures of the corset on me! 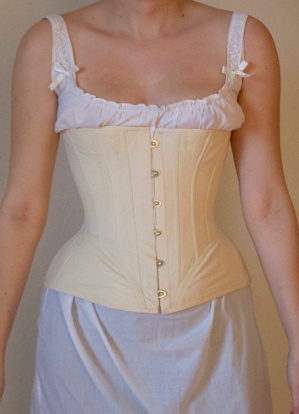