For most historical costumers, finding the perfect fabric is one of the most difficult parts of getting the look right. One of the main difficulties is that many fabrics used in the past just aren’t made anymore in the same quality, or they are too expensive for a hobby seamstress. Just finding really fine linen is nearly impossible.

One of my favourite historical fabrics is wool damask. And it’s another of those fabrics which has sort of died out. It just isn’t made anymore, which is a shame, because it’s stunning.

Yes, that’s wool. Wool damask is two-toned, and pretty much always in the same color palette. So you get a lighter/darker combination, so light green with dark green, dark blue with black, or beige and brown.

Wool damask is also usually glazed. It’s treated in such a way that it gets a shiny finish, making it almost look a bit like silk damask. It would’ve been a cheaper than true silk damask, but gives the same impression. The patterns of the damask were definitely inspired by their silk counterparts. 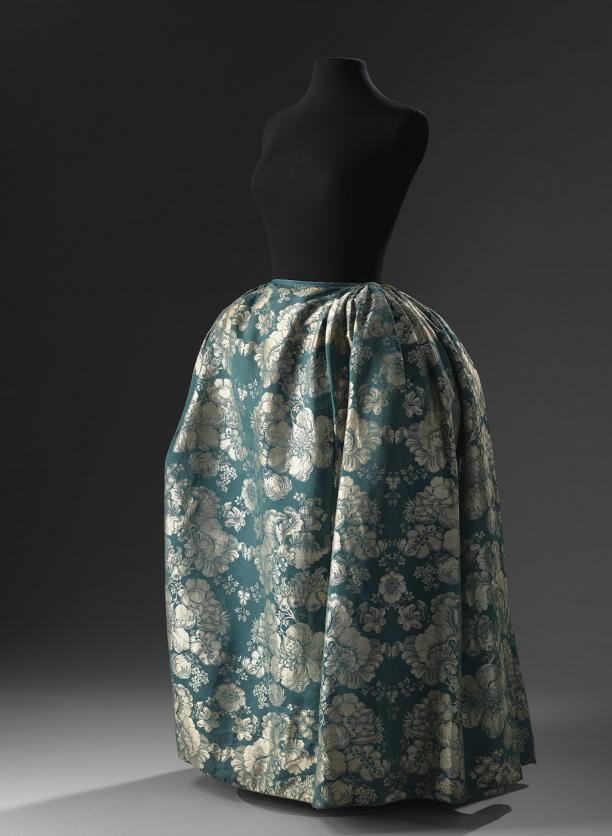 And a wool damask one: 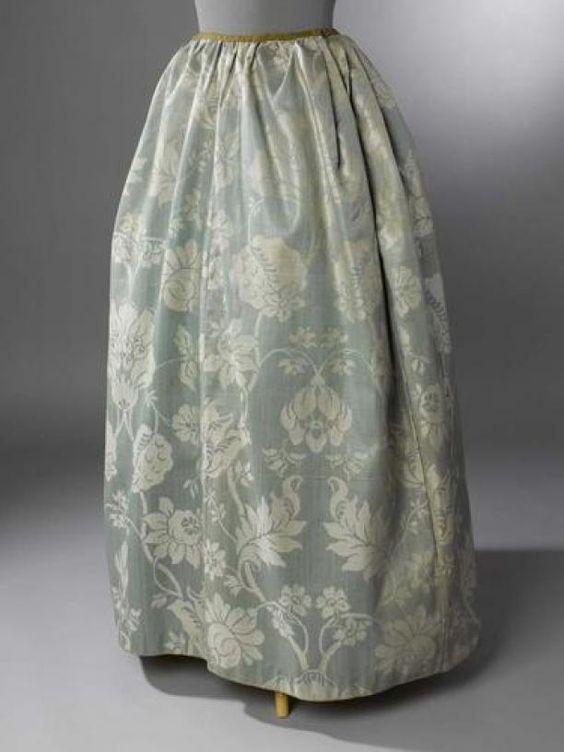 Wool damask was used for skirts in the 18th century, and continued in traditional clothing throughout the 19th century. They were probably often also worn as petticoat under the upper skirt, as they’re a little less fancy than the silk ones.

Some of them are pretty stunning though, so I definitely think they were worn as upper skirt as well. Look how shiny! 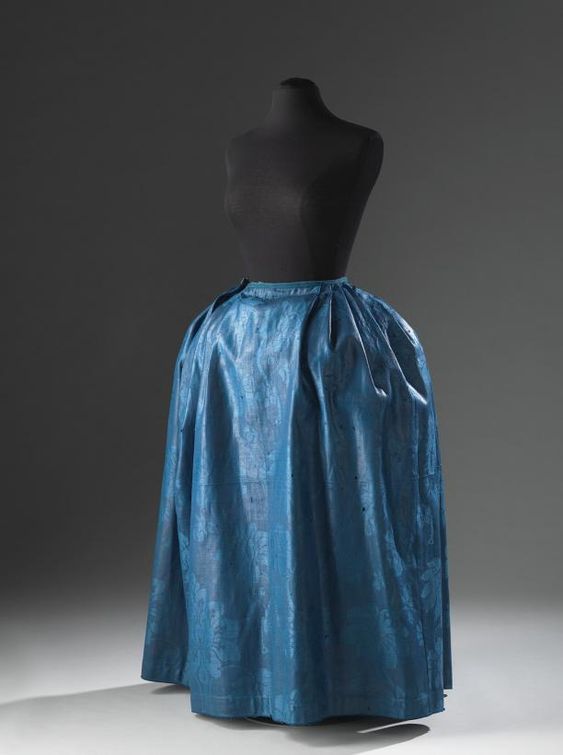 The wool damask was used mostly in skirts, but also in men’s waistcoats and in stays. In some regional wear parts of the stays were visible at times, calling for fancy fabrics. 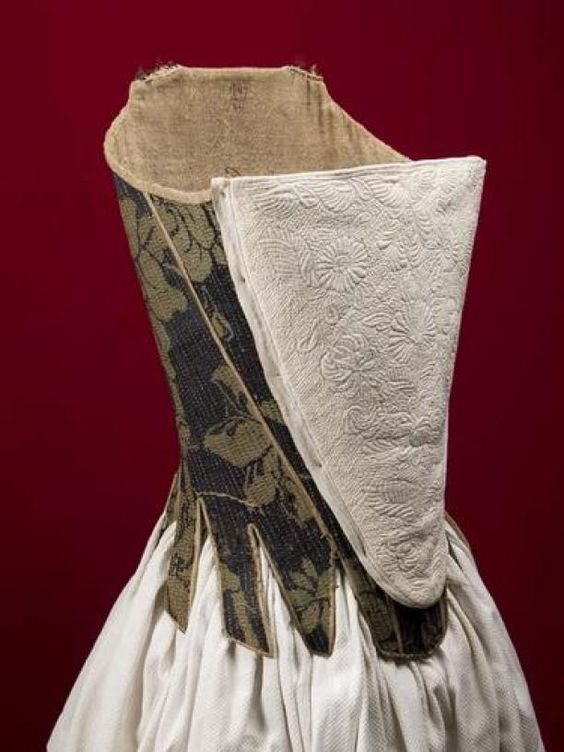 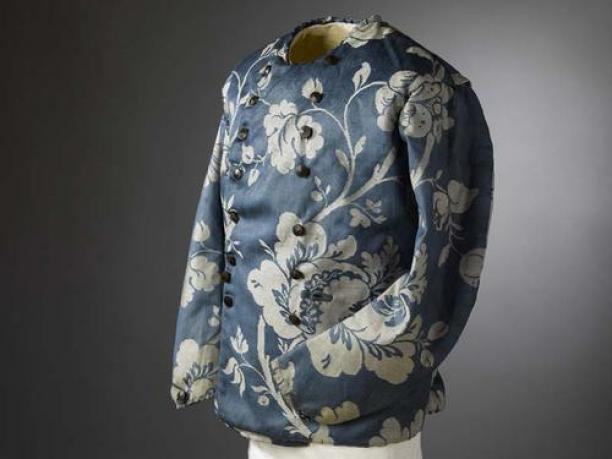 Despite the popularity in this country, the wool damask worn in the Netherlands was mostly not actually made here. Instead, this fabric was imported from England, Norwich to be exact. Interestingly enough, I’ve never really seen it in English collections though, suggesting that it was primarily an export product. Wool damask was woven on narrow looms (giving much narrower fabrics than common today), and so that the back of the fabric ‘mirrors’ the colors on the right side, as with all damask. Some more information on this fabric written by Meg Andrews is here. It became a staple of some Dutch dress, and I suspect the skirts in these well-known prints might be from wool damask: 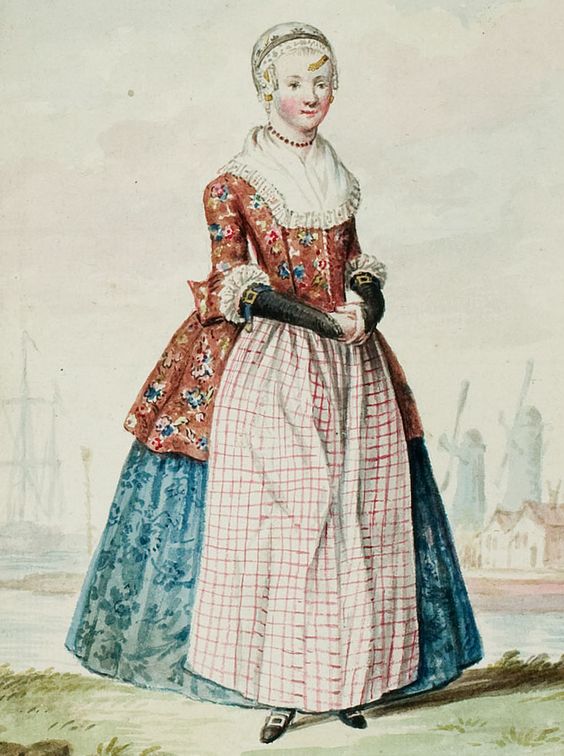 A lady from Zaandam 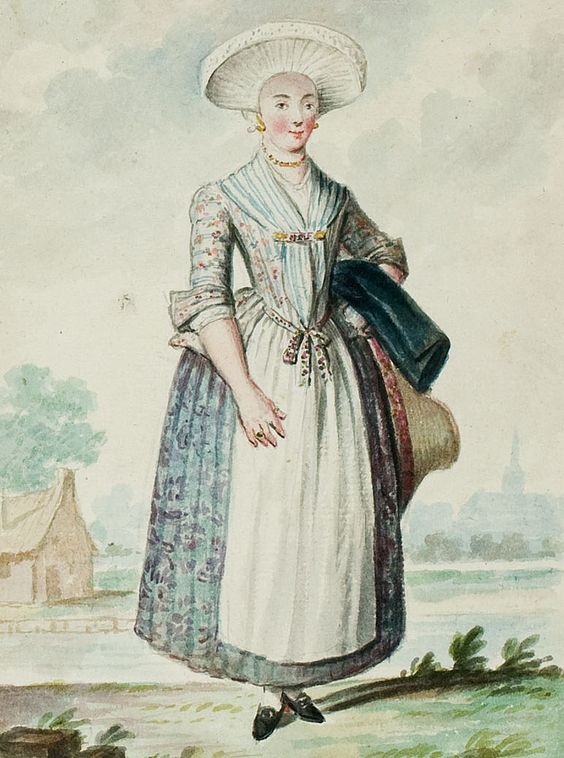 A lady from Friesland

Some more, beautiful 18th century skirts, all from the Dutch Openluchtmuseum: 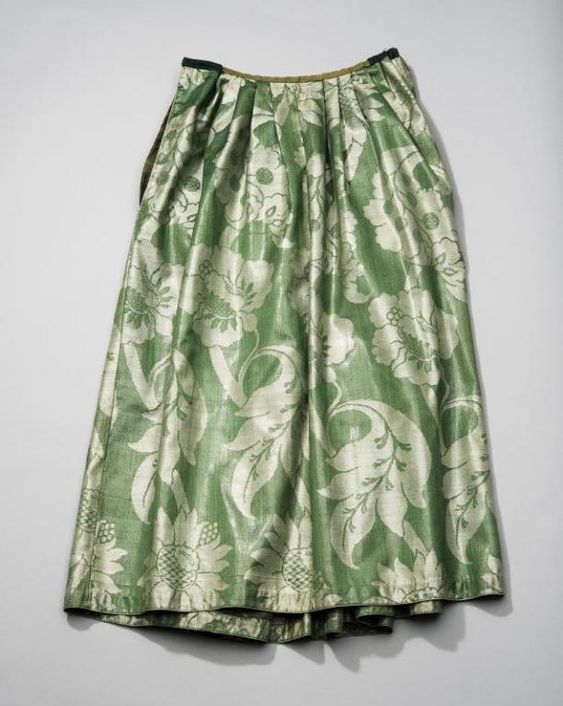 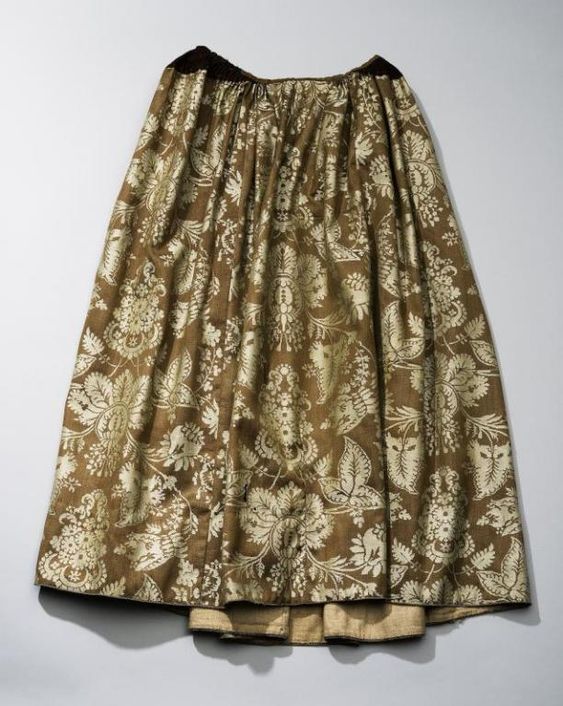 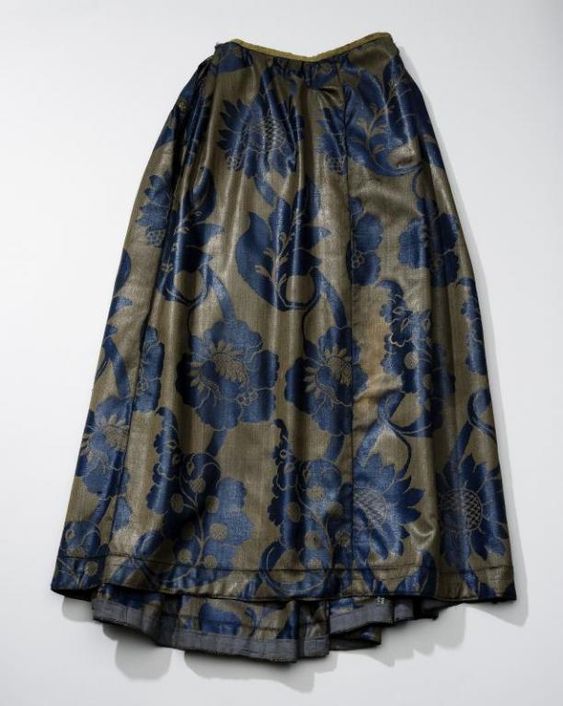 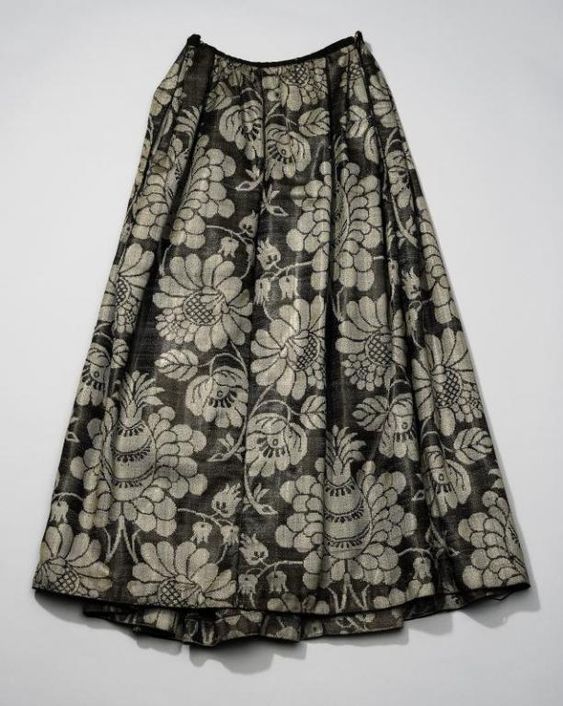 One of my more prized possessions is a black wool damask skirt, probably from the late 19th or early 20th century. This one is from the Veluwe, where these skirts were still worn as petticoats (underneath a plain black skirt) with the traditional costume. It’s constructed pretty much the same as an 18th century petticoat would be. It’s gathered at the top, with a flat front, and two side slits. It’s got one tuck in the skirt, and a velvet band a little above the hem. The bottom has got a bit of fluffy trim to protect it, and it’s got another ribbon as well as a hem facing on the inside to protect the fabric.

The full skirt, front & back:

A close up of the fabric, left from the outside, right the inside.

The top is tightly cartridge pleated to a waistband.

Despite the age, the fabric is still very pretty. The velvet trim and hem facings clearly show wear, but the main skirt is still in very good condition. This was another reason these skirts were so popular, the wool fabric wears very well. If only they still made fabric like this today!