My past couple of post have been about undergarments for my 18th century project. At the same time I’ve been slowly progressing on the gown itself. I’m making a round gown, so with a full skirt, and aiming for 1780s.

My fabric is a light grey / silver silk. The pattern is somewhat old-fashioned for the 1780’s, which sees similar two-toned patterns, but which are generally more flower-like, and less baroque.

Nevertheless, the pattern does have some more naturalistic elements. And given the penchant people had for re-using ‘older’ fabrics, I’m calling it plausible enough.

I started my patterning with the pattern for the Italian gown in the American Duchess Guide to 18th century dress making. My first mock-up was just exactly the pattern in the book, and that was already pretty close. In the end, the things I changed most were the angle of the shoulder strap, the height of the back, and the width of the strap. Below is the last mock-up.

After that, it was time for the scary part, cutting the fabric! Taking great care to match the pattern on all the pieces.

I’m sewing this dress by hand, which is why progress is relatively slow. It’s quite a suitable project for a first ‘all by hand dress’ though, as I’m not planning on adding much trim.

First up were the boning channels center back, and then constructing the back. On the back pieces all allowances were folded inward, and then all 4 layers were stitched together in one go.

Next up was attaching the front silk to the lining with small prick stitches. After that, I could fit again. My silk was a little less stretchy than my mock-up, so I had to let it out a bit on the side seams. (So definitely good that I did this fitting). I also took out the center-front line on each side, and re-did those as they weren’t really straight on the body after all.

Then it was time to sew the side seams. These were first sewn with the back silk piece and both lining pieces, allowance to the right side. The front silk piece was then folded over and in, and prick-stitched. I actually did the second seam the wrong way first time, including the front silk instead of the back…  So I ripped it out and re-did it. A bit more painful than when the seam is sewn by machine, but if I’m going to do this by hand, I’m going to do it right…

All seams are sewn with grey silk thread (if only because it’s easier to source than linen). Some close-ups of the insides. From left to right: the back seam, side seam, and center-front.

Final thing to do was to sew the front strap lining to the bodice. This is what it looks like now. The shoulder strap in silk will be one of the last things, sewn in place after the sleeve is in. I’m currently working on the skirts first though.

As mentioned in my last post, I wanted more petticoats for my 1780s dress. I know from ladies in more regional dress in the 18th century (which followed fashion quite closely), that they probably wore at least 4 petticoats 1. As I can’t really imagine fashionable ladies wearing fewer, I’d ideally have 4 for my ensemble as well. One plain linen bottom one, underneath the false rump. One simple linen one as first one over the rump, one striped linen or wool one over the rump, and a final, prettier, printed cotton one as top ‘under’ petticoat. The top petticoat was usually the prettiest, as that one might show when lifting up the skirt.

When writing the last post, I had one grey linen petticoat, which I’ll be wearing right on top of the rump. Now, I’ve also added the final, printed cotton petticoat to the list!

It’s made the same way as my grey linen petticoat, following this tutorial.  Basically, you take a two big rectangles and sew them together on the sides leaving open a slit at the top. You then fold down the top so the hem will even out over a rump (longer in the back), and them the bottom. Then the top is pleated so each side is a little larger than the waist measurement, and you add a waistband and ties. Very simple, and nice for a quick side project, especially if you cheat and sew it by machine as I did.

My petticoat is made of cotton, printed with red flowers. If it looks familiar, that might be right, as it’s made from one of the new Ikea duvets.

In the costuming community, Ikea is known for some fabrics which are based on 18th century textiles. As such, they’re actually reasonably historically accurate, though sometimes colors are slightly off, and not all of them are equally good. Plus side is also that they’re very easy to get a hold of, and often relatively cheap!

This particular line is new, and is a two-color design. The flowers are quite small, and there’s a fair bit of white space which makes it most suitable for later 18th century styles.

The color way is what makes this a little bit unusual as a chintz reproduction. By far most chintz is multi-colored. Two-tone designs are quite a bit rarer. If there are two colors, it’s either white-black, black-white, white-blue, or white red. The white-black and blue-white combinations were often worn for mourning, especially in regional costume. 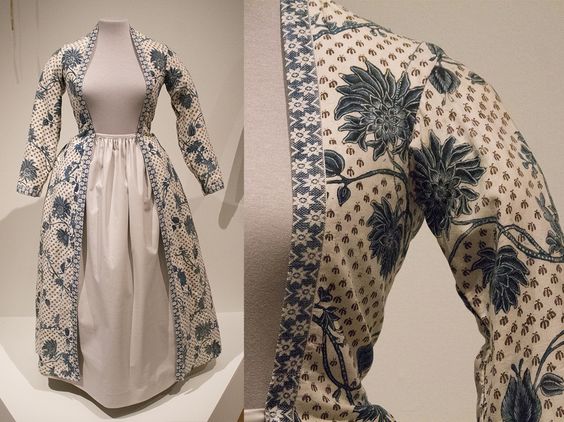 Wentke (from Hindeloopen) for light mourning, in white and blue. Fries museum

The red-white chintz is often called ‘milk and blood’ in Dutch. You see it most often in the costume of Hindeloopen, where it was used specifically for bridal clothing. 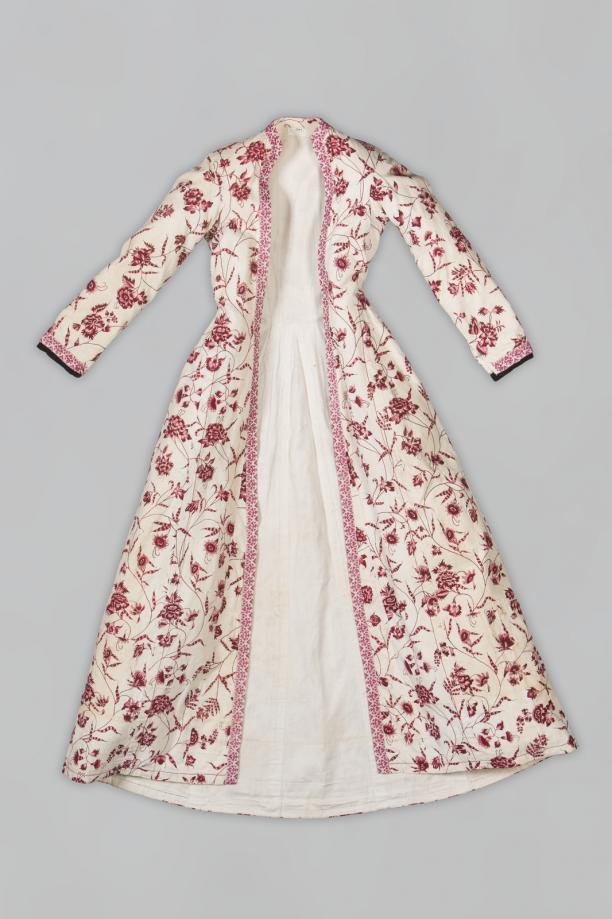 Although a bit rarer, you do see ‘fashionable’ dress in white and red as well. This jacket is a very nice example. All in all, the fabric is pretty close to historical, and a nice choice for a petticoat which might show on occasion! 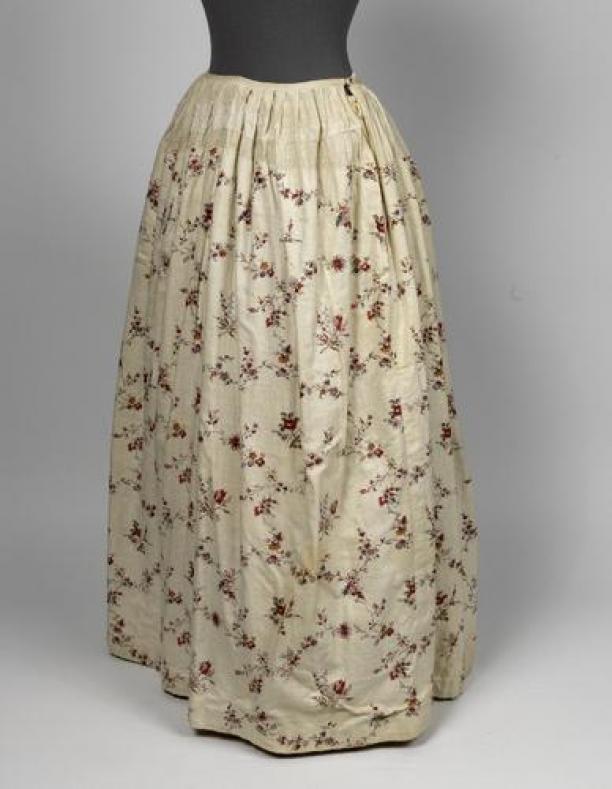 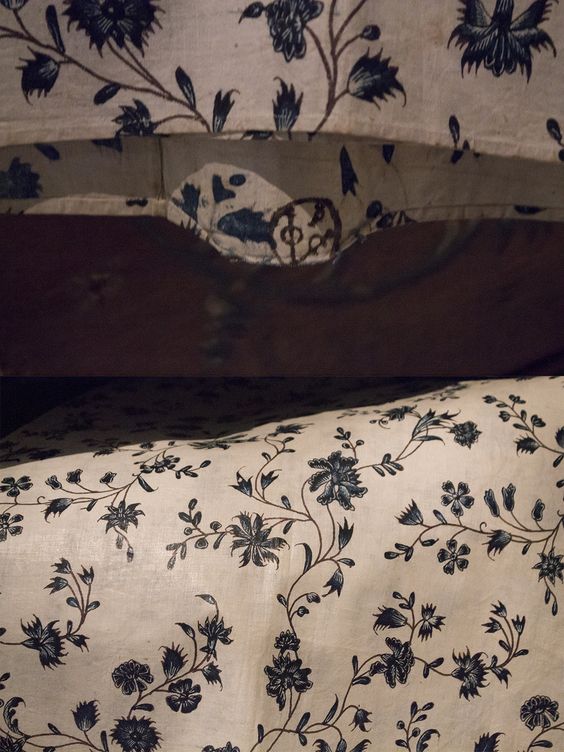 Chintz from the Fries museum, looking quite similar to the little Ikea flowers!