This also means I finally have some sewing which fits in with the Historical Sew Monthly again, as the theme for Febuary is Under! So the stats:

The Challenge: Under
Material: Green & plain colored linen, leather chamois for binding
Pattern: American Duchess Simplicity front-lacing stays
Year: (the year the item represents, not the year you made it) ca. 1780s
Notions: Synthethic whalebone boning & twill tape
How historically accurate is it? Reasonably. Materials are pretty close, synthethic whalebone is obviously synthethic, but close to whalebone in behavior. The boning channels were stitched by machine, as were the seams between panels. Everything else was hand-sewn.
Hours to complete: I’m very bad at keeping track…
First worn: Today, for pictures
Total cost: Most of the materials were already in stash, so no clue…

Somewhere last year I got the Simplicity patterns from their first collaboration with American Duchess. Not for any specific project, but they were on sale at that time and I figured they might come in handy at some point.

I particularly liked that they included front-lacing stays, which is convenient when one needs to dress oneself. After I made my green medieval kirtle, I had some green linen left, and decided green stays would be a nice plan.

They’re rarer than some other colors, but they definitely do exist. The only disadvantage of my green linen is that it does stain a bit, so the inside of my future 18th century clothes might turn somewhat green. I’m not too bothered by that to be honest, the outside will be fine anyway. 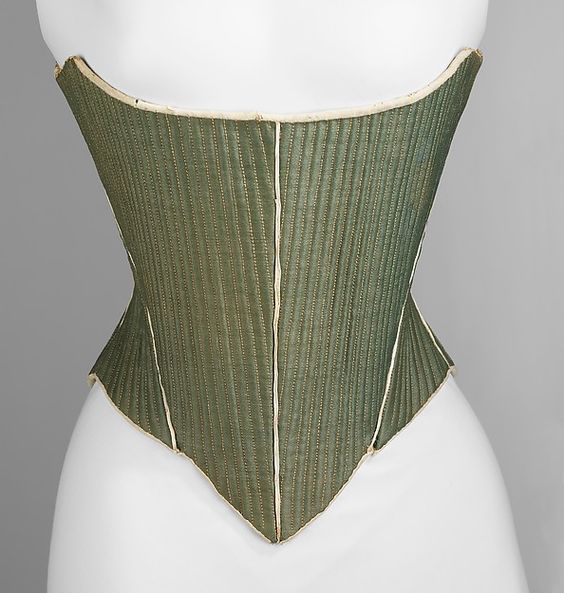 I did the mock-up and main construction of my stays somewhere last year before the summer. They then got put on hold a bit, as I had absolutely no plans for an 18th century outfit yet, and I did have other stuff I wanted to make and also wear first.

Planning out the boning channels

After the summer, I very briefly picked up the project again to do some embroidery. I was inspired by a couple of different stays which have some ‘swirly’-type embroidery on them, which I thought was very interesting. I have no idea how common this embroidery actually was, or if it was a regional thing (northern European?), but I decided to go with it.

My main inspirations were this pair for the ‘waves’: 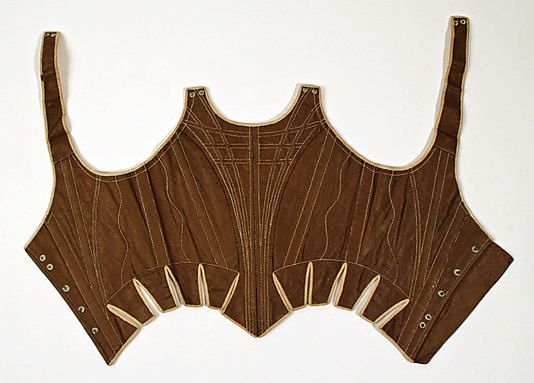 And this one for the little ‘leafs’ on the back: 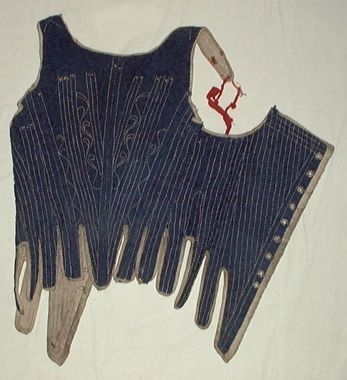 Swirlies on the front, leaf style in the back, both between the boning channels

After the embroidery, the project got put on hold again, this time for the 1660s and 1880s ensembles. Beginning of this year, after I finished my 17th century shift, it was finally time to go back to them!

I sewed in facings for the eyelets, and then the eyelets themselves. After that I covered the seams with narrow tape.

At this point, it was time for binding! I used leather chamois (from the local supermarket), which worked really well! A thimble was definitely good to have, but no pliers necessary and the chamois curved and stretched nicely.

The final step was lining the whole thing. I’m often a bit too lazy to pretty up the insides, but I hope this will increase their longevity!

For straps, I decided to take inspiration from the new American Duchess stays pattern. It uses twill tape straps, which cross in the back and attach to hooks in the front, inspired by this original: 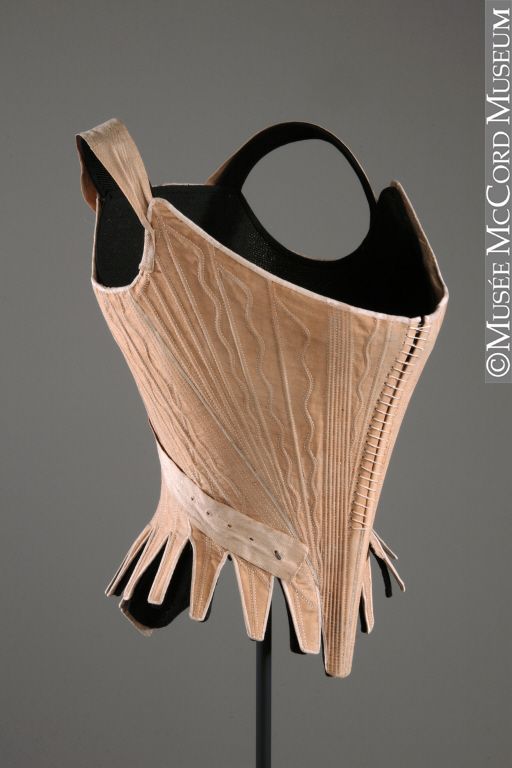 This method held appeal for several reasons. It helps you hold your shoulders back, which I can use some help with. It also gives a relatively narrow strap which lies wide on the shoulder (to the outside), good for not poking out under necklines, and it’s very easily adjustable.

I tea-dyed the tapes first, as they were bright white at first. Left original, right dyed version.

The only disadvantage of the straps is that they partly cover up the back embroidery. Ah well.

To finish up, some more pictures of the stays on me!

In retrospect, they are just a little short on me. I didn’t make a boned mock-up, so that’s entirely my own fault. I did learn later this pattern runs a little short in general (too late, obviously), so if you’re also working on it that’s good to double check.

All in all, I’m not too bothered by it, as the shift keeps stuff in place well enough in my case.