I’ve gotten quite a long way on my 1660’s dress, and the base of the bodice is nearing completion. Time for a blog post about the interior, as it’s quite interesting on it’s own!

Although stays were already worn in the 17th century, the particular type of bodice I’m making does not need stays. Instead, the bodice itself is heavily boned to provide the support.

I started making my bodice with the guidance of the book Seventeenth Century Women’s dress patterns. It shows close-ups, an x-ray picture (to see the boning), patterns and full construction notes for every original garment. I based my bodice on this one from the book. 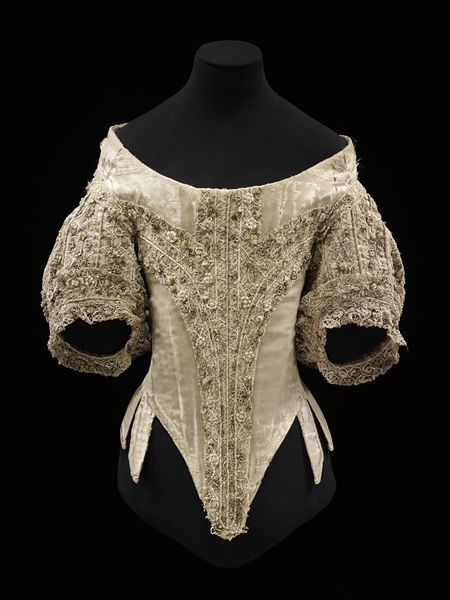 I made some changes to construction though, mostly because I machine-sewed the parts I could without it showing on the outside. I also didn’t always add every extra layer of linen. The original has loads of little extra pieces stitched in in places, and most of those I left out.

While the outer layer was attached entirely by hand, the foundation is therefore not constructed in a historical accurate way, just as a disclaimer.

First step was adapting the pattern. I’d scaled it up, but made it a bit too big, so had to take it in again. I also took away most of the bust curve in front as I didn’t need it, and I lowered the neckline. Many 17th century bodices are quite low, with maybe a shift on top to make them a bit more modest.

Copying the pattern to cm grid so I could scale up to my full size cm gridded pattern paper.

Not necessarily too modest though. 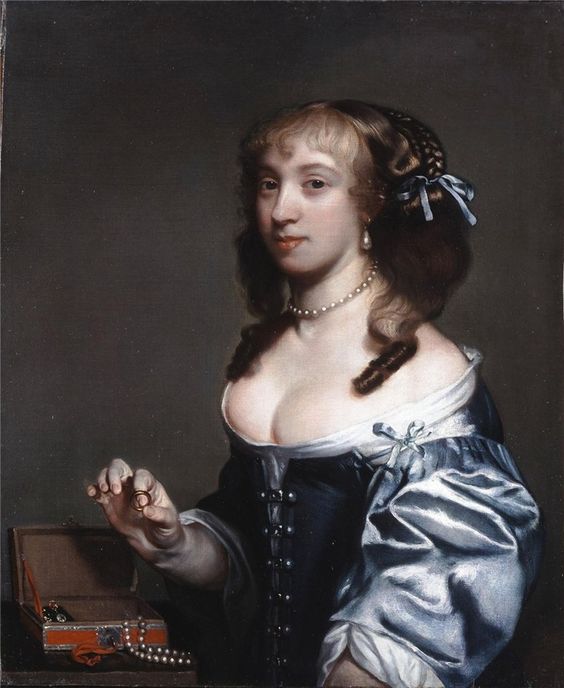 Being rather small on top, that means I could cut it lower than the original. I also changed the angle of the straps slightly so they would still lay over the shoulder okay.

2nd mock-up. With a busk for fitting purposes.

After fitting, it was time to start the sewing! I used sturdy linen for the foundation. Every piece has 2 layers of linen. First step was drawing the boning channels on top, trying to follow both the original lines and accounting for different pattern shapes and bone width.

Sewing the boning channels took some time, even by machine. I respect those who do this by hand.

One piece in the original is unboned, and instead stiffened by extra layers of linen buckram and wool. I used coutil because I didn’t have buckram (I know cotton coutil isn’t period), and some leftover wool from another project. Those layers were pad-stitched together for extra support.

After that, I sewed all pieces together, again by machine.

The trickiest part was a little gusset added between two of the tabs, for a little extra flare. It worked quite well on the body! It’s just sewn in by laying it next to the foundation and sewing it together. Both sides will be covered anyway, by lining or outer layer.

After that I put the boning in, I could still reach most places after construction. The only construction done after the boning was the strap, as that closes off the channels. I used 5mm wide German synthethic whalebone for this project. I’d gotten a 25m roll, and after my 1880’s corset and this bodice I had 2cm left over… Suffice to say you need a lot of meters for continuous boning like this!

The foundation layer also has a pocket for the busk. This was gone in the original, but is there in most other examples of such bodices. It’s basically a strip of linen sewn to the inside, and a pocket at the tip.

Insides. All seams are stitched down, necessary because the linen is so thick it doesn’t lay nicely flat otherwise.

The final step of the foundation was to bind the bottom of the front panels, and the top of the back panels. These are the places where the allowance of outer layer will be turned in between the layers and sewn down. (The bottom of the back panels will be bound all layers together, the top of the front will be finished by turning the allowance of the outer layer to the inside around the linen.

That finished the foundation! It already looks really great, the most annoying thing at this point was not being able to try it on yet. The eyelets are sewn through the outer layer as well, so no way to close it yet until those layers are on and all eyelets are in.

At the moment I’ve only got a little bit of trimming and sleeves to do, so when those are done I’ll show the bodice with the golden silk and trim on top!

My blog is 4 years old today! In summer 2013 I started my first big historical sewing project. I’d only made a (not very accurate) Regency dress before, and this project was a 1860s dinner dress including all undergarments, so quite a leap. When this blog started I was still working on that dress, and suffice to say that project got me hooked!

My first and last Victorian corset. Still room for improvement, but it’s definitely moving in the right direction.

My first and last regency outfit. Left was a dress only (no period underwear yet), right is a chemise, stays, petticoat, dress, spencer and bonnet. The left dress was a great place to start costuming though! (Right image by Martijn van Huffelen)

It’s always fun to look back, and a good reminder that your current skill level always matters a lot less than the fun you have in making and wearing your outfits. The whole process of research and discovery and learning is such an important part for me, and the great thing is that there’s always so much more to learn!

At the moment there are two more outfits in the making, and I’ve got loads of plans for more! Suffice to say, I haven’t grown tired of this hobby yet in the past four years.

Since starting this blog I also made a Facebook page and Instagram account for it. I just saw that I reached a 1000 followers on the Facebook page this week, which is honestly still a bit unreal to me! A big advantage of Facebook is connecting with other enthusiasts through groups, and Instagram is great for showing progress. Nevertheless, I still really value the more in-depth view a blog offers, so this one will definitely continue to exist as well. In any case: to anyone who has been following me, thank you!

One of the things that inspired me to get started with historical sewing were the other sewing blogs out there. I still really enjoy seeing other peoples projects, so to close this anniversary post a shout-out to some of the blogs that really inspire me!

This was the first historical sewing blog I stumbled upon, and I actually went all the way to the beginning to read the whole thing (that took a while). This blog really inspired me to get started on the big, elaborate projects, and to do it right.

One thing most historical costumers strife for is to look as you’ve stepped out of a photograph. To really get the silhouette, details and accessories right. This lady does that so well, and the way her dresses are fitted is perfection.

Izabella runs her own business sewing historical pieces, and has made so many lovely pieces from all different era’s. On her blog she shares loads of advice, and I’m always impressed with how generous she is with her knowledge. Plus, I briefly met her at her Victorian ball last year, and she was a lovely host as well!