I’ve started a new corset, 1880’s this time. My goal for this one was two-fold, firstly to try to pattern it on top of a padded bra to give a little more curve. Corsets tend to flatten me a bit up top, and while fashionable in some periods, the 1880’s were all about the hourglass. The second goal was to take a little more time patterning to get it just right.

I haven’t even cut the coutil I’ll be using yet, but that first step of patterning is done. I thought it might be interesting to see the process of slowly adapting the pattern to fit.

I should also give a shout-out to the corset making community of ‘Foundations Revealed’, a online magazine/coaching subscription website including facebook group, where I got some great feedback on my progress.

I started with the 1880’s pattern from Corsets & Crinolines by Nora Waugh. 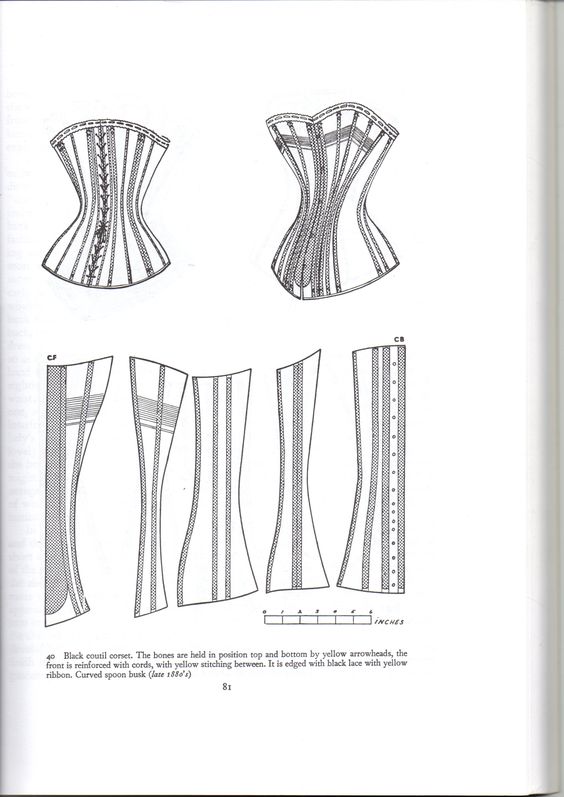 I didn’t have a scanner, so I eyeballed the pattern onto gridded mm paper until I had the height and waist measurement about right, and the pattern pieces had the same proportions as in the book. I then copied the pattern to full size cm paper and started from there.

The black lines were the pattern as roughly copied from the book. I measured it and found it small, so the red lines are the added width for the first mock-up.

When fitting, I found I shouldn’t have added the extra space, the corset was too big. So the second mock-up went back to the black lines. Additionally, I found that the corset was too short on me. So I lengthened the pattern by adding a couple of cm above the waist line. This picture shows that pattern, laid out on top of the original.

This one was much better, starting to fit. It was still short, so I added some more length to the pattern. I also added a little room to the hips on the side, and took some away from the bust and center front bottom curve, as those were too big.

This was the first one I made a mock-up off in sturdy fabric, including busk and lacing, but no boning yet. The overall fit wasn’t bad, but the busk was tilting quite badly. I’ve had this happen on previous corsets, and thought it might just be me not lacing it straight, but it was too extreme to be a coincidence.  I also didn’t really like the inverted ‘c’ shape the third panel was making over the hip.

I suspected the tilting was because I wasn’t symmetrical, so to test this I took a picture of myself, standing solidly on 2 feet. I then traced my outlines on both sides, and then copied the lines to overlap on the other side. As you can see quite clearly, one hip is both a little higher and wider than the other. The things you learn about yourself when sewing…

So, for the next mock-up I made a left and right version. Basically, I added some hip space for the right-hand version. I also transferred some hip room from panel 3 to 4 to make the pattern shape a bit nicer, and I added 1cm at the top. I’d added that in the previous mock-up and it was still a bit low, so I figured 1cm extra room at least would be good.

This next mock-up I also boned, which makes quite a difference. Also: the hip fixes worked, as it wasn’t tilting anymore, yay! The whole corset was still a bit low at the top though, and I still had too much room center front bottom.

I added even more space up top, and took away a bit of the bottom. I also took away more of the curve on the bottom of panel 2.

The final mock-up was really close. The height is finally good here, and it’s curving quite nicely. It was a slightly sturdier fabric than the previous one, and I noticed that made it a little tight in the hips.

So the only things I changed for the last draft was to add a little more hip room, mostly on panel 5 as that didn’t have much flare yet. In this picture you can see the final pattern, laying on top of the one I started with!

The main changes were that I added some length above the waist, and above the original bustline, lengthening the corset quite extensively. I took away some bust and tummy space, and added space for my hips. Finally, I made a left and right hand version to accommodate my own asymmetry.