Aside from a chemise, corset, bustle and petticoat, a lady in the 1870’s would’ve also worn a pair of split drawers. Called that because they’re split in the center. Slightly odd to modern eyes, but very convenient when using the toilet in a corset & bustle dress. (This great video by Prior Attire shows the process 😉 )

So a pair of drawers was still on my todo list for ‘one day’. I finished my dress & mantelet a couple days into Christmas holidays, with a couple of days to go without any plans. So I decided to make these up! I couldn’t find a pattern, so I drafted one myself. One of my inspirations for the trim: (fromt he MET) These were my sketches (apologies for the phone quality). Top right initial drawing. Right sketch of the pattern, not to scale. Bottom left pattern to scale (every square is 5cm). Basically each ‘leg’ is cut on the fold, top edge being half of the waist measurement. (folded double, so one waist measurement per leg… If that still makes sense).  The leg is sewn shut from the bottom to the line, from which it’s left open to create the split. The double line at the right of the pattern are front & back, I figured I could use a little more room in the back. In the end, I left the split go even lower and ‘shaved’ a bit off the corner you see in the back line. I ended up doing pintucks in this part of the pattern, but attached an extra part for the ruching and lace so they’re slightly longer than seen on the pattern. The waistband is a simple wide strip folded over, with darts on both sides to shape it a little.

And from the back. Not much different… 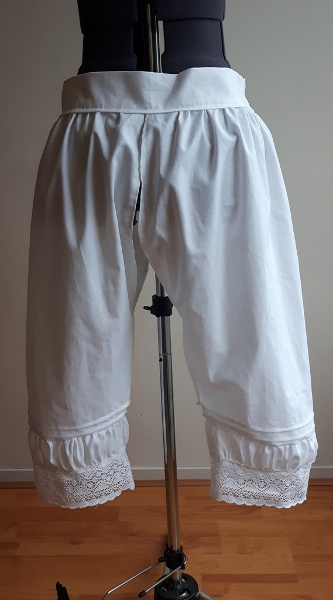 For the trim I made 2 pintucks in the leg. Then I cut a strip about 2 times as wide as the legs and gathered them on both sides. After sewing those on, I added a strip of lace I had left from my Edwardian petticoat. All done!