The 1920’s have never been one of my favorite periods of clothing. I tend to favor close-fitting with a natural waist even in my modern clothing, and the 1920’s is very much a ‘loose-fitting, dropped waist’ type of period. Given that I’m pretty pear-shaped, having the waistline low on the hips and the rest of the garment cut straight isn’t very flattering either.

Nevertheless, when I got an invite to the yearly dinner for volunteers at the castle where I’m a guide, and saw that there was a ‘Great Gatsby’ theme, I couldn’t resist making a dress for it. So I went looking for a simple pattern with a not too low waistline, which would still look okay on me. I did a bit of searching, and eventually found a great post by Festive Attire for a ‘one-hour dress’ including pattern. The pattern is quite basic, but with some clever gathering it gives a nice drape when made of a slinky fabric. It’s also early ’20s, so the waist is at the high hip and not yet at it’s lowest, which should make it more flattering.

I did some measuring to slightly adapt the pattern to my size. I took my bust-measurement with just a little ease to the bodice part of the pattern and 75 cm for the skirt because that would fit a 150 fabric width quite well. After cutting and fitting, I also decided to slightly curve the neckline and shorten the sleeves just a bit. The hem was adjusted after fitting as well. 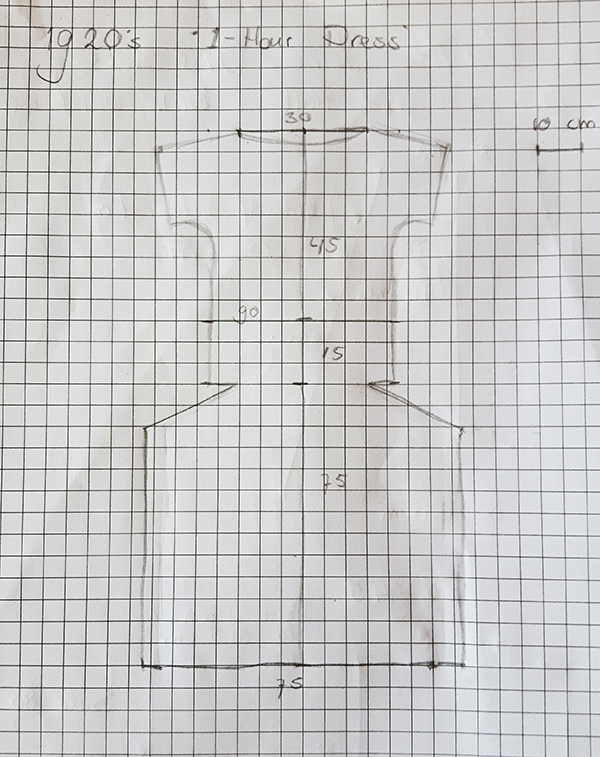 For fabric, I went looking for something which would drape very well, ideally with something of a pattern to it as the shape is quite basic. I ended up falling in love with a tulle with sequined leaves on top. It’s just a little heavier and stiffer where the sequins are then I’d planned, but I figured that 1920’s was the perfect opportunity to use sequins and just go for it. As it’s very see-through, I also got a brown chiffon with a golden glimmer to put underneath. Neither fabric is historically correct as I’m pretty sure they’re polyester and plastic, but they do look the part. I’ll still have to wear a slip-dress underneath because both fabrics are sheer, but it shouldn’t be too noticeable.

Cutting the fabric took a bit more time than I’d thought, because both fabrics are rather shifty and they needed to be the same. I also ended up cutting the skirt just a bit narrower than planned because the fabrics didn’t quite make the 150 cm width after all. When they were cut, I pinned around the seam lines and ‘inserted’ the chiffon into the sequin fabric. Careful re-pinning, I put the fabric layers on top of each-other to get all 4 layers together. 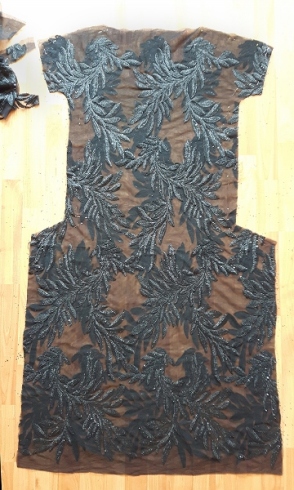 I decided to make french seams because the chiffon frayed quite badly and both fabrics are rather sheer. It was also easier, because I could just put all 4 fabric layers on top of each other as I cut them and pin on the correct side for the first seam. I was afraid I’d have to remove the sequins around the seams before sewing, which would be a pain because the tulle they’re on is rather fragile, but with a thicker needle I could easily sew right trough them. After doing the initial seams, I fitted to see if the seams were in the right place. I’m happy I did, because I’d made the sleeves too narrow and could still unpick a bit and widen them because I’d left some room. After fixing this, I snipped the seam allowances, turned the whole dress inside-out and re-stitched the seams to catch the seam allowances inside. Next up was doing the gathers on the skirt and side seams. At this point it really started to look like a dress.

I finished the neckline and arm-holes with black satin bias tape. For the hem I finished the raw edge and turned the fabric just once to the inside. This means the edge still shows on the inside, but I was afraid that with 3 layers of sequins it’d become too bulky.

The finished dress on my dress form. From the front and side, showing the drape and gathers:

The bias tape finishing the sleeves

And a close-up of the gathers on the side:

The event I made this dress for is the annual dinner for volunteers and employees at the castle De Haar. I’ve been working there for almost 10 years, starting in a paid function in the weekends while still at school. I continued on during my study years, and after starting to work full time turned volunteer to be able to work shorter days. I could never quite give up coming all together, and even though I’m only there 2 days a month now, I’m still in love with the place. It has a long history going back to the 12th century, but was rebuilt from a ruin between 1892 and 1912. The family who owned it was always just there for one month, inviting guests, having lavish dinner parties and masked balls. All in all, it’s an amazing setting.

The main hall when empty: 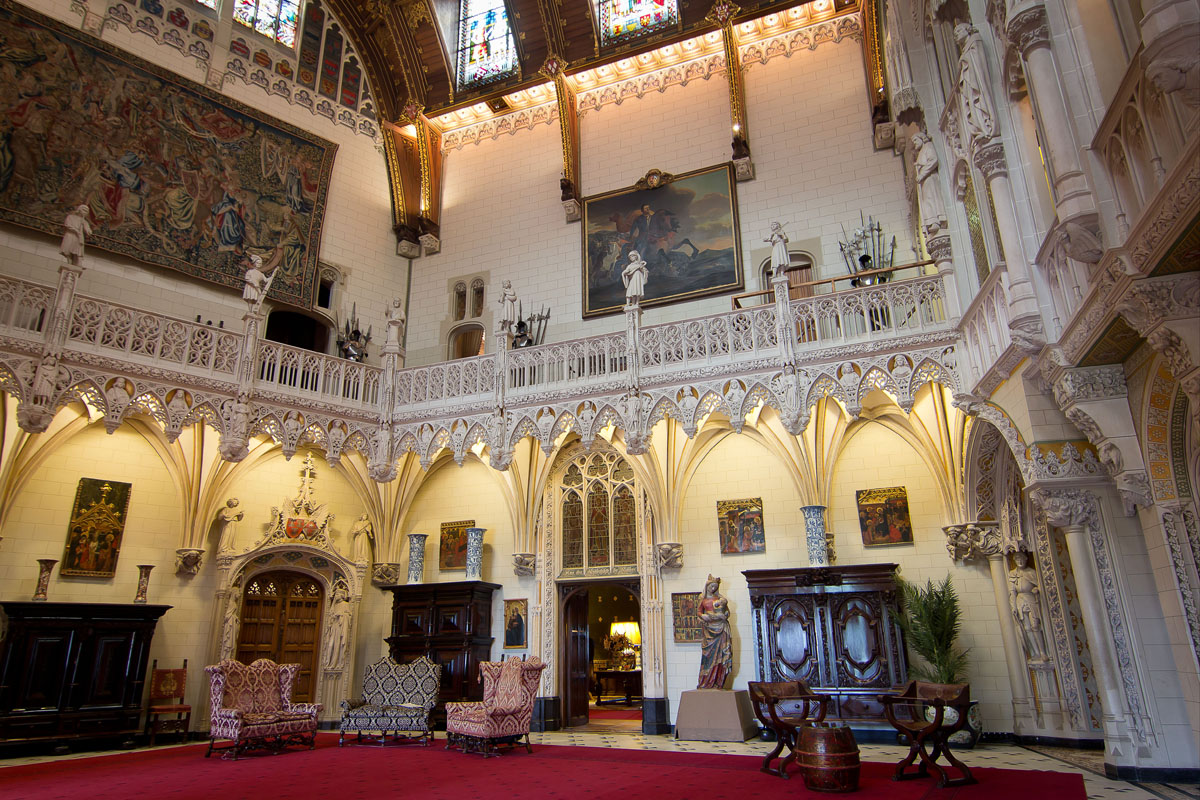 A couple of images just before I left, showing off the dress on while it was still light enough.

Showing off the side gathers. 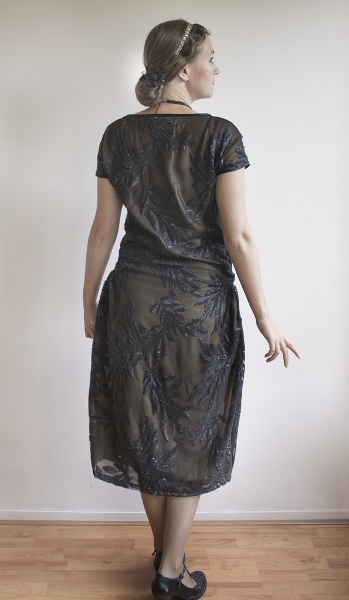 Because I coulnd’t resist, in black & white

I don’t have a lot of images of the event, but this was the one in the ‘official’ photo spot. I was a bit scared to sit on the antique fabric with my sequins, but sitting down carefully and staying still worked. 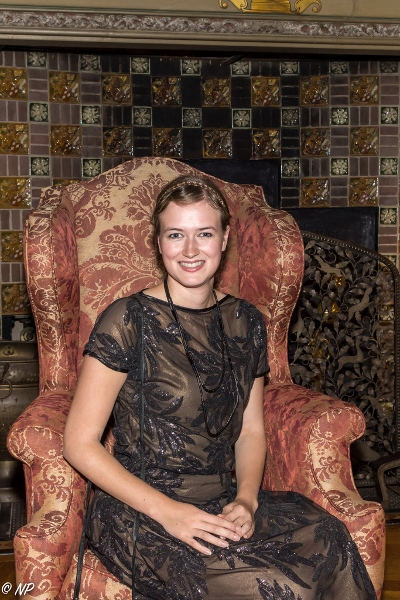