Last year in May, Izabella from Prior Attire organized a Victorian ball in Bath. I didn’t go, but I saw a lot of images of the event, and many gorgeous visitors. I decided at that point that it’d be worthwhile to put the event on my wish-list, just to see if it’d be possible to go one time. It would have to involve a holiday as I don’t actually live in the UK, but it’s always fun to dream.

Shortly after the ball, the theme for next year was announced, namely early bustle. Even though I had no concrete plans to go, I started looking at gowns from that period and eventually decided to just make one! There’s another ball a bit closer to home in January, so if I could manage to finish before then I’d be able to wear it anyway.

So a new project was started! I now have the corset and bustle/petticoat finished, and it’s time to start working on the dress.

When settling on what to make, I started with looking at ball-gowns from this period, namely 1870-1876. I found quite quickly that most are actually a bit too frilly for my taste. Most dresses I saw had some elements I didn’t like. Some had a lot. I quickly decided that the ruching you see a lot was not for me. So instead, I went looking for what I did want, to see if I could incorporate this into one design. First up was color! I didn’t have too much choice, as I wanted to buy the fabric at an outlet. This made buying silk possible budget-wise, but given how much I’d need I would depend on stock. Almost all ball-gowns in fashion plates are white or pastel. The very occasional red or black appears, but pink and baby-blue were definitely popular. It’s a little too sweet for me though. So I decided to go for a light green/yellow/sand color if I could find it.

And that worked out! I bought a lovely thin but sturdy taffeta in a very pale yellow/lime color. It’s fairly difficult to photograph the color right, but this comes pretty close:

On to the rest of the design! I knew I wanted a train, as almost all ballgowns seem to have one. It’s not always practical though, so I want a train I can bustle up or remove. This means having the train as an over-skirt so that I can either remove it or bustle it up by attaching ties on the inside, should be doable!

For the front and back overskirt, I decided to keep it simple. This’ll be my first time making a bustle, and I don’t want to make it too complicated for myself. So the bustle will be based on a pattern as shown in this video.

For the underskirt I don’t want a train, so I can wear the dress without one. Ideally with trim all the way around so the train can be removed. I’m not certain if I have enough fabric for a lot of pleating, so I settled on another type of trim. Lace! You see quite a lot of examples of sheer-ish black lace on top of light fabrics, something I really like. This brown dress is a nice example: So, lace it is! I also decided that I want flowers. They’re so typical for the period, and can serve to bring a little color into the picture. I’m aiming for (dark)red.

For the bodice, I’m going for pleating, inspired by this image, although I’ll probably do the basic puff sleeve. Although I haven’t got the lace and flowers I’ll eventually use, I pulled something from my stash just to look  at the color combinations. 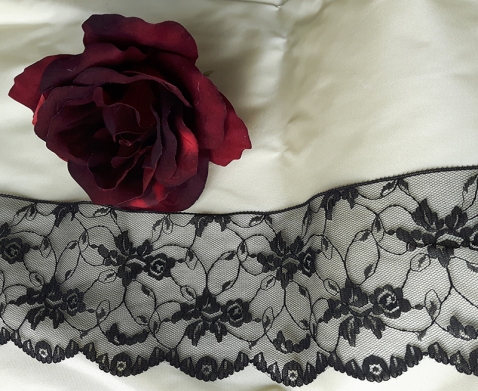 And with everything kept in mind, this is the initial design! I might change some things along the way, but this is the plan! 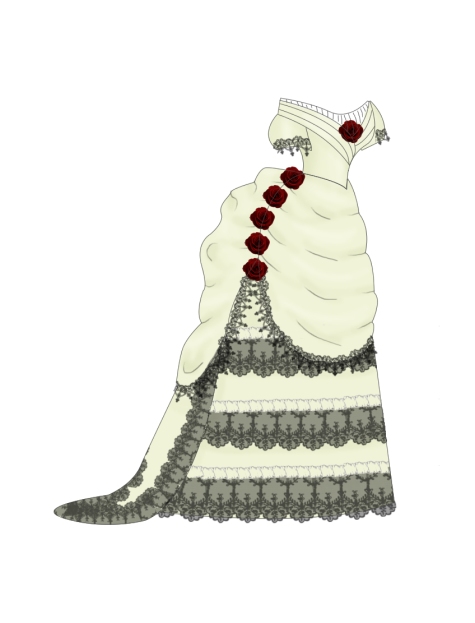 To finish off, shortly after I made the design image, I found this fashion plate. I love how the middle dress resembles my design. I might even go for the lace as bertha as well…