A couple of weeks ago I was in a lace museum, where they also had an exhibition on the traditional costume of the north of Limburg. It’s a costume which is generally under-represented in the literature. Recently, one local collector wrote a book about this costume, saving his knowledge gathered over the years.

The costume of the north of Limburg dissapeared from daily life in the beginning of the 20th century. It’s most characteristic part is, without doubt, the headwear. The rest of the costume mostly followed current fashions, but there are a couple characteristics worth mentioning.

The headwear worn by ladies is called a ‘toer’. The toer consists of a lace cap and a wreath of silk flowers. The lace cap is worn on the head over a black under-cap, so the lace can be seen properly even on light hair. Some photos of traditional caps:

Detail of the pleating in the front

On top of this cap, the flowers are worn. These silk flowers are mounted on a wide ‘headband’, and has ruffled lace at the bottom. It has two large ‘ribbon’ like pieces hanging down. 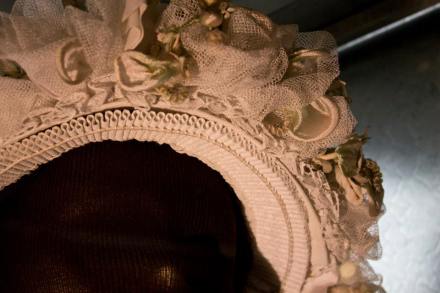 Complete tour. Detail of the lace undercap and the tule and silk flowers on top.

From the back. Here you can also see the lace ribbons hanging down.

For mourning, a different cap was worn as lace was not allowed. For this reason, the under-cap was made of fabric and the flowers replaced by black crepe-like fabric.

Under-cap for mourning. No lace

Detail of the pleating. 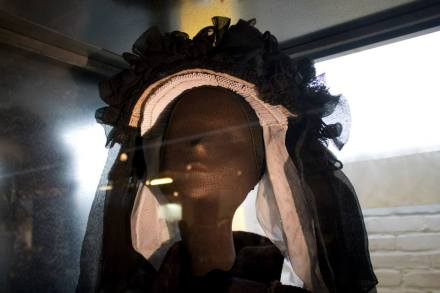 A ‘plooiplankje’, or pleating board for the making of the under-cap

This lady would also clean the toer, because it needed to be completely taken apart to do this. Ladies would wear their toer daily, and it would cost as much as at leas a month’s wages at the time. A new toer was worn on sundays. Once it had been washed, it was usually worn during the week. These pieces were very valuable, and were often passed on from mother to daugther.

The rest of the clothing during the last period the toer was worn, was mostly black. A black skirt, black blouse and for outer wear a ‘pelerine’ was worn. This was a typical cape of the time, about hip-length and with a small collar. These were made of different materials, but often wool or silk, and beautifully decorated with methods such as lace, soutache or embroidery.

Another typical part of the costume from Limburg were the red/brown shawls. These were worn in the period before the costume became completely black, around the middle of the 19th century. They were cashmir shawls, originally made popular in the early 19th century by the French empress (and wife of Napoleon) Josephine. The story is that Josephine spend so much on clothing, that her husband forbid her to buy any more shawls. Instead, she used them as bed-spreads and made pillow-cushions out of them, as these were not clothing. Josephine was a trend-setter, and many women followed her example with these shawls. In Limburg, they became incorporated into the traditional wear and therefore stayed in fashion quite a bit longer than in modern fashion circles. The smaller shawls were worn as shawls, but when a girl married, a very large one was pleated around the shoulders with pins to form a cape and this would be her ‘bruidsdoek’, or ‘weddingshawl’.

Wedding shawl. It was pinned in place this way (being a rectangle in shape originally)

Wedding shawl. It was pinned in place this way (being a rectangle in shape originally)