I’ve been doing Irish dancing for almost 10 years now, in various degrees of intensity. I still love it though, and although I’ll never be the best dancer (too many other hobbies to train so much!), I’m still improving slowly. For anyone who’ve never heard of it, Irish step-dancing is best known for its international shows such as Riverdance. The general sport is focused not so much on show though, as it is on competition. Irish dancing is truly a competition sport, especially in Ireland, the UK and the US. The Netherlands doesn’t have so many schools though, and within my organisation we have only 2, maybe 3 competitions a year. Some people even fly to Ireland regularly to join in competition there!  Irish dancing has its own traditions, rules and fashions. Especially the last can be a bit overwhelming for people not used to it. Girls wear busy and bright dresses and curled wigs. When performing, each dress is unique and made for the dancer. This is custom work and as dresses can be quite complicated prices run high, 1000 being cheap for a new dress. But the idea is to stand out on the stage, and the fashion development has taken a life of its own. I don’t always like the over-the-top look, but it’s very interesting how these fashions developed, as it’s truly a modern form of folk-tradition.

Traditionally, everyone would wear their best clothes for dancing and competition, and girls would curl their hair. Dresses were decorated with traditional Irish knotwork, often from the Book of Kells, and had a knee-length skirt (any longer and dancing would be difficult), a modest neckline and long sleeves. At the back, a sash would be pinned to the dress. These are a couple of examples of traditional dance dresses:

1961. A ‘regular’ dress, but with the traditional embroidery and lace collar

By the 1990’s, dresses were beginning to be a bit more elaborate and the skirts started to have stiffened panels.

In 1998, Riverdance performed for the first time and had a great impact on Irish dancing. Many more people started, and the dress styles quickly evolved. The traditional knot-work was replaced by geometric designs and the goal was to be noticed. I like the dresses a lot op to this point, let’s just say that the following period was not the best for dancing fashions..

Let’s just say I’m happy fashions are rapidly changing at the moment. The last years, the dresses have seen a number of changes and an increase in variety. One noticable change is that the waistlines are dropping, with a long bodice and short skirt. Skirts are also becoming shorter and losing the stiffened panels for softer styles. More and more, knotwork embroidery is coming back. The sequins and diamonds are here to stay though, I’m afraid. Although there’s still some dresses which make your eyes sore, there are some beautiful examples too.

I especially love the knotwork emboridery which is coming back. I’m not a big fan of glitter, but I like the traditional elements. I’ve never had my own dress, as they’re way to expensive to buy one for just one or two competitions a year. There are some plans to go to Ireland to compete next year though, so I’ve decided I’m going to make my own dress! The only drawback is that I don’t have an embroidery machine available, so knotwork embroidery is out. I’ve picked up some very pretty fabrics though, and I’m quite excited in seeing how it’s going to turn out. For now, this is the design:

Black velvet for the base, with a (faux) silk with velvet roses fabric for the bolero and old pink accents.

I love red cloaks. It probably has something to do with the whole red-riding hood vibe, but I also really like the color and feel of deep red wool. This weekend, I found a beautiful natural red wool. I already had some plans of making a red cloak one day, so I couldn’t let the opportunity pass. It might take a little time to get around to making it due to other projects, but the first step is there!

When I first thought of making a red cloak, I had the long, 18th century type in mind. I still love this style, but I recently found some examples of gorgeous Edwardian cloaks and fell in love with the style, so I think that will be the new plan. For this post, some inspiration of historical red cloaks.

1890s Metmuseum. The braiding on this cloak is one of the reason I’m leaning towards this period. I’d be a lot of work, but it’s so pretty!

It’s been a while since I posted on this dress, mostly because I haven’t been working on it a lot, but it’s at a stage where I wish to show it! Almost done, I just need to make the back-closure and hem the skirt and the short-sleeved version will be done. Then I just need to make the detachable sleeves and a way to attach them. But at this point, it actually looks almost like a finished dress.

This was the fabric I started with. It’s really the type where photo’s don’t do it justice though, the light changes the color subtly.

For the body I used Sense & Sensibilities ‘Elegant Ladies Closet’ pattern as a base, but I changed the front piece as I only gathered the outer piece (and a lot more than in that pattern), but not the lining. This is the construction of the back bodice in progress. 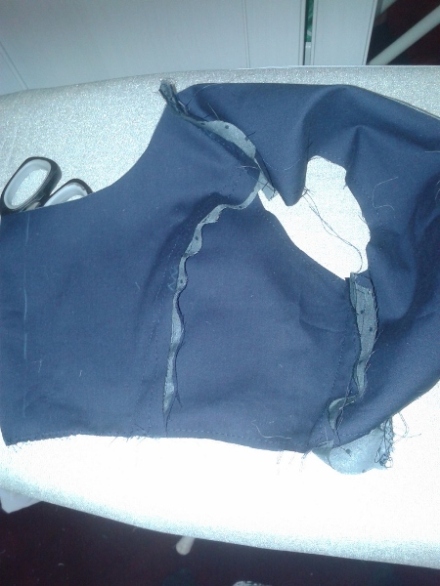 The whole bodice without sleeves. I chose to gather the silk only and just attach it to the lining so it would stay gathered. Not very period as far as I know, but I preferred this to inserting a drawstring as the skirt will not be gathered. 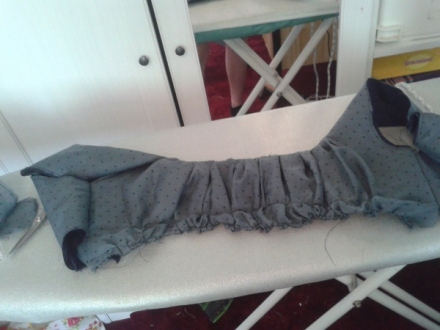 Fitting the bodice, it works. When I attached the sleeves I found out it was a bit too tight after all because I pull the back of the bodice forward with my arms… Next time I’ll need to make a mock-up with sleeves and try to fix that. 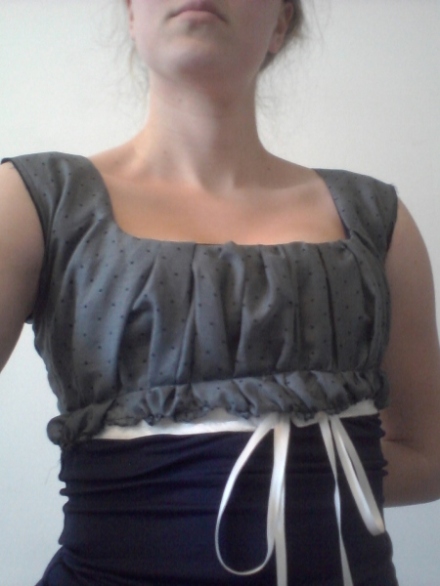 Working on the sleeves. I again used the short puff sleeve as a base, but I added an extra puff for variation.

With the skirt attached. The waistband is attached to bodice and skirt. Again, I don’t know if this is period, but it worked for me.

Sorry for the bad photo, and I need to iron the skirt… Anyway, it looks like a dress! 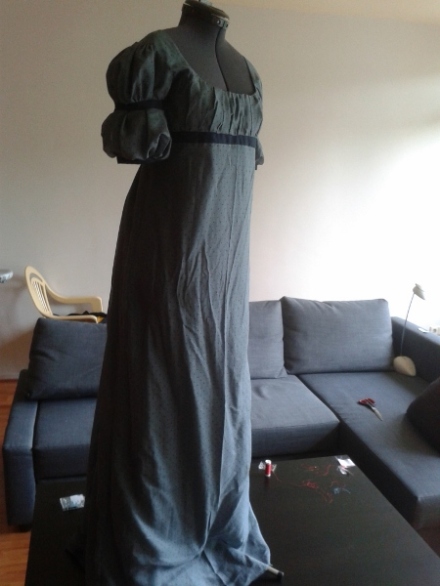 This photo was taken before I attached the back of the skirt to the bodice, but that’s done now. A lot of gathering at the back! This fabric is so light & thin that it gathers perfectly.

Not too many progress pictures as I forgot, but in a next post I’ll do some shots of the interior of the bodice and the finished seams. Next post will hopefully be with the finished dress on me!