I love traditional costumes, they’re fascinating. There is usually a very long tradition and history of how the clothing became a certain way. Also, a lot of the time, every piece of the costume tells a story. You can often tell from someones clothes their age, their faith, their martial status, their wealth and about family tragedies.

The Netherlands has a lot of different traditional costumes, a few of which are actually still worn every day by a small group of women. They are disappearing though, there are no new wearers, and those still there are usually over 60. It’s understandable, people used to live in small communities their entire lives. Go to school, get married, work and die in the same small village. That world is gone though, and there’s no place for the old traditions in modern society. Even though I could not blame anyone for not wearing the costumes all day every day, I can’t feel anything but sad at the thought that in 30 years, traditional costume will be completely gone from daily life the Netherlands.

Every now and then, I’ll try to dedicate a post in here to the traditional costumes of my country. This post will be about Hindeloopen. Hindeloopen is a small town in Friesland, in the north of the country. It used to be a very wealthy sea trading town, which strongly influenced the clothing worn. The costume from Hindeloopen is probably my favourite of all Dutch costumes, but it is also the one which has been gone from daily life the longest. The last woman who wore it daily past away in 1883. The town has always kept the tradition somewhat alive though, since 1883 there have always been women who wore it on special occasions, up to today.

Because of its location on the sea and the international perspective of the inhabitants, the costume worn in Hindeloopen was actually very different than any other in the province. Its main characteristic is the brightly colored chintz fabrics and the very characteristic hats.

Which type of hat was worn was decided by marital status. This print shows one married and one unmarried woman. The one of the left is of an unmarried woman. Once she married, she would start wearing the other, higher headdress. 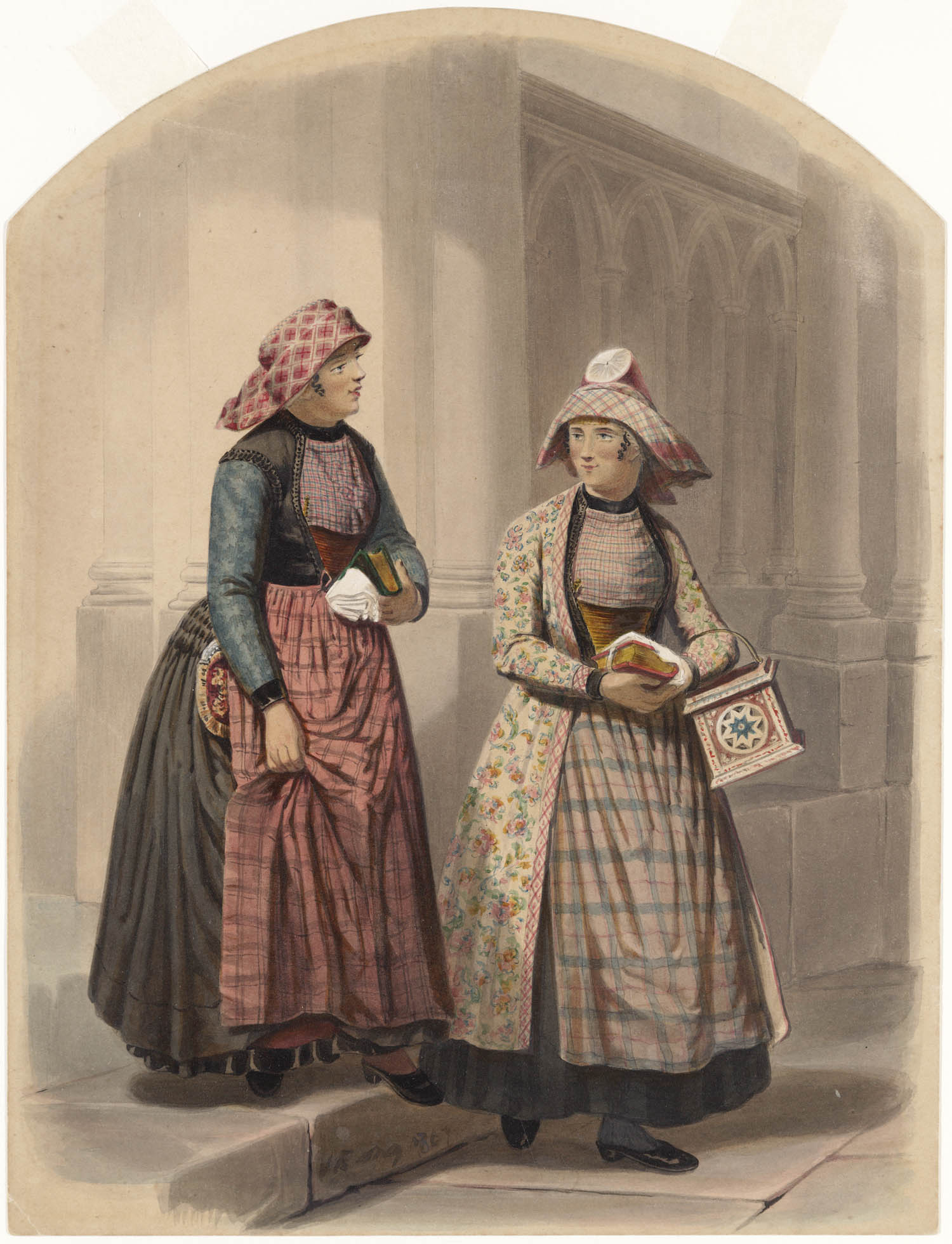 As dress, the women would wear a black skirt, a black bodice (/vest) with colored strings, a checkered handcerchief above this, a checkered apron, and either a long or a short chintz jacket. This is excluding the underwear of several underskirts, and sometimes the jacket was left off, in which case either an under-jacket or separate sleeves could be worn. This short clip shows a modern woman getting dressed.

The jackets are typical for Hindeloopen dress, especially the long ‘wentke’. The short jackets were called ‘kassekein’. 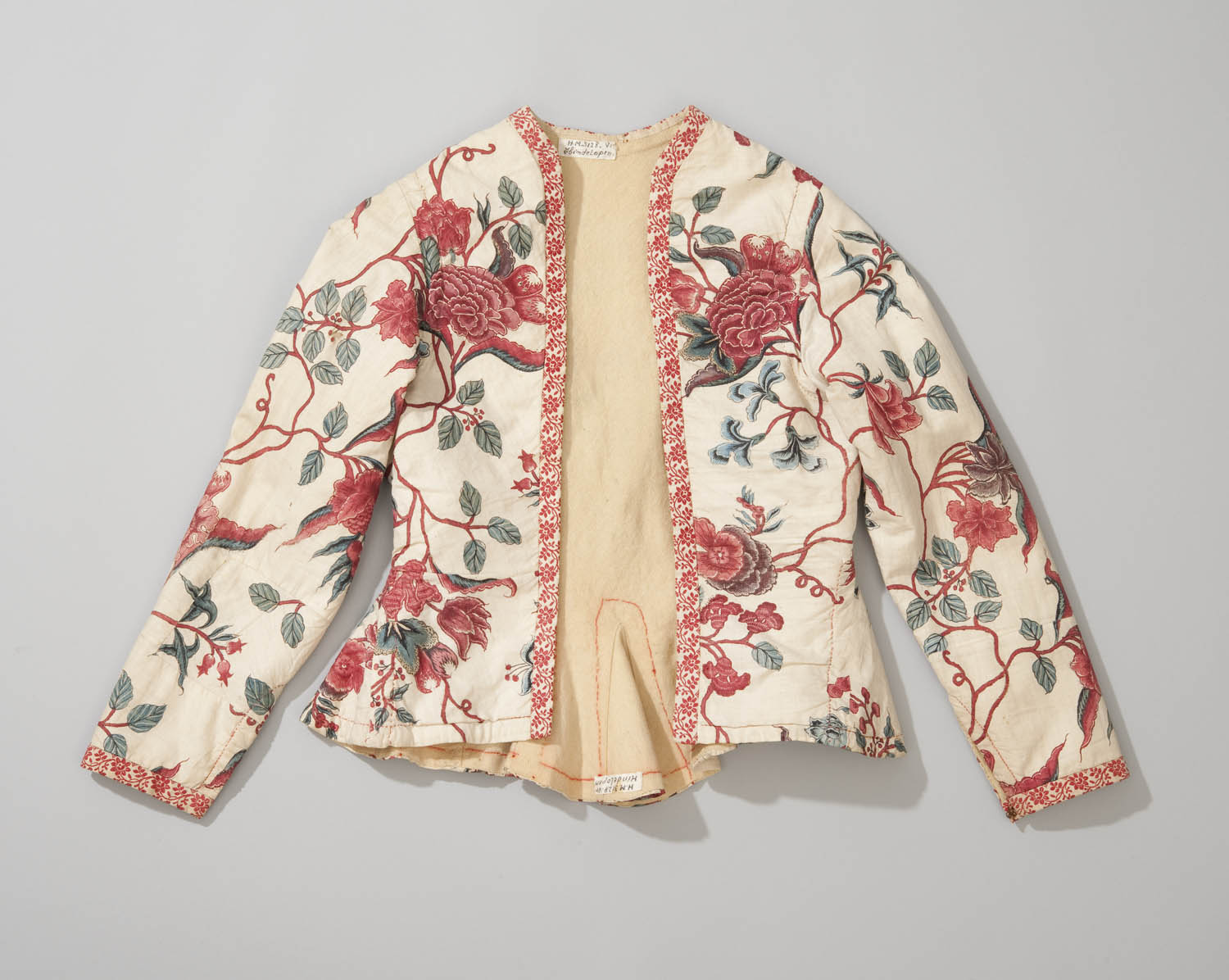 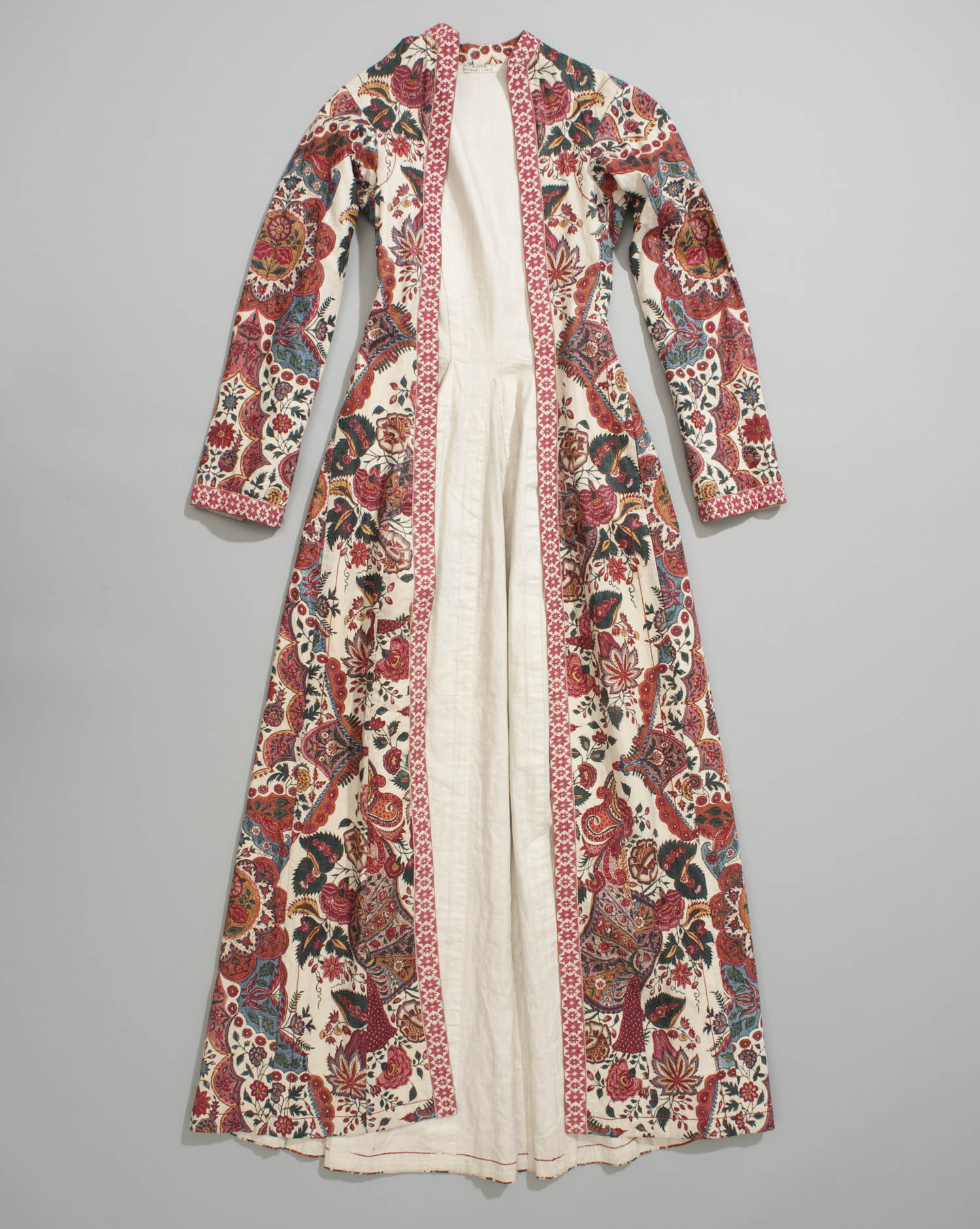 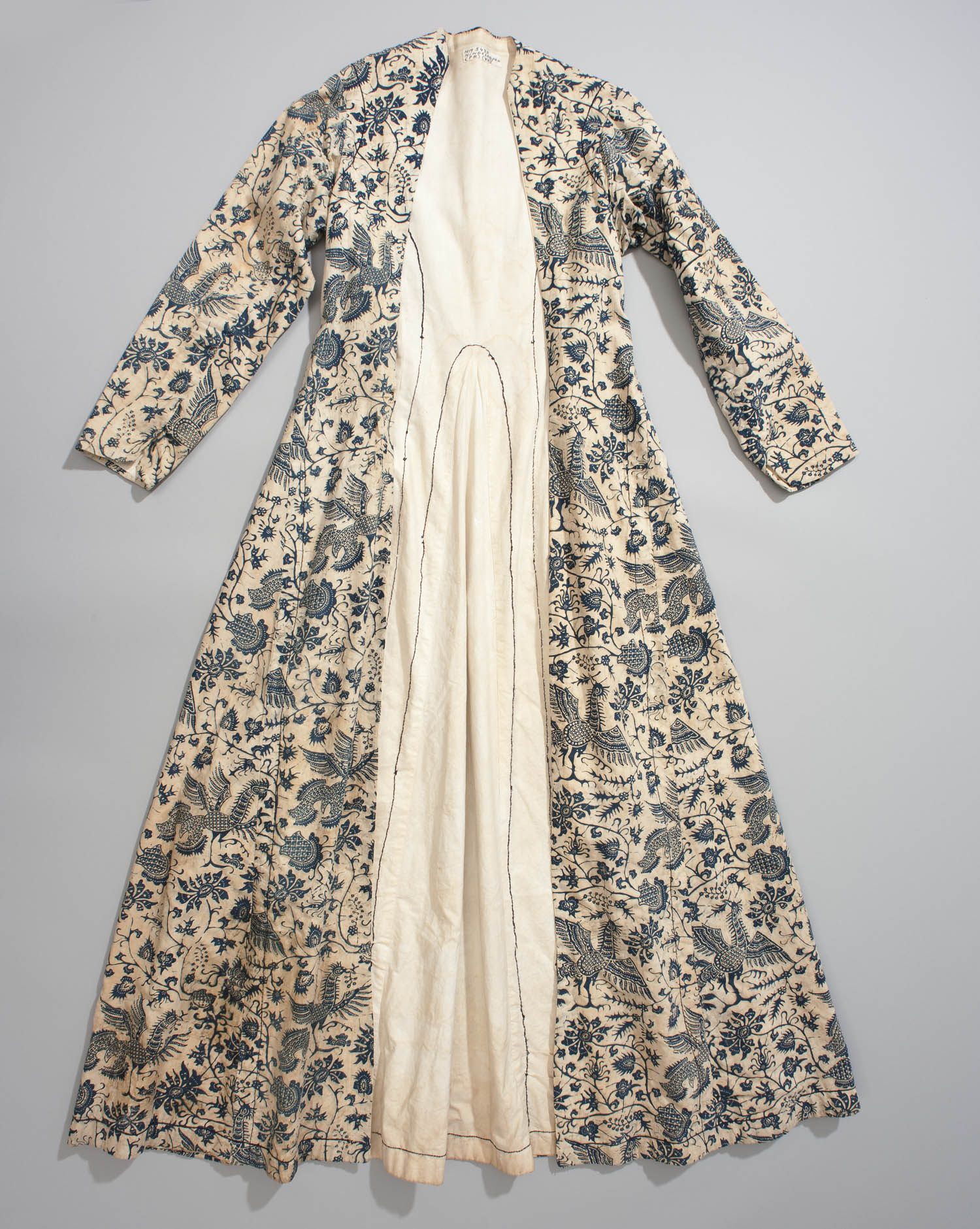 Most of what we know today of the original costume, we know from one artist who painted a lot of women. The picture below shows several types of mourning. Which type was worn was decided by how close the person dying was to you and how long ago it was that they passed away. There were rules for when you could change one type for another. As people lived close to the sea and the life of a fisherman or trader was dangerous, it was not always uncommon to wear mourning for very long periods of time. 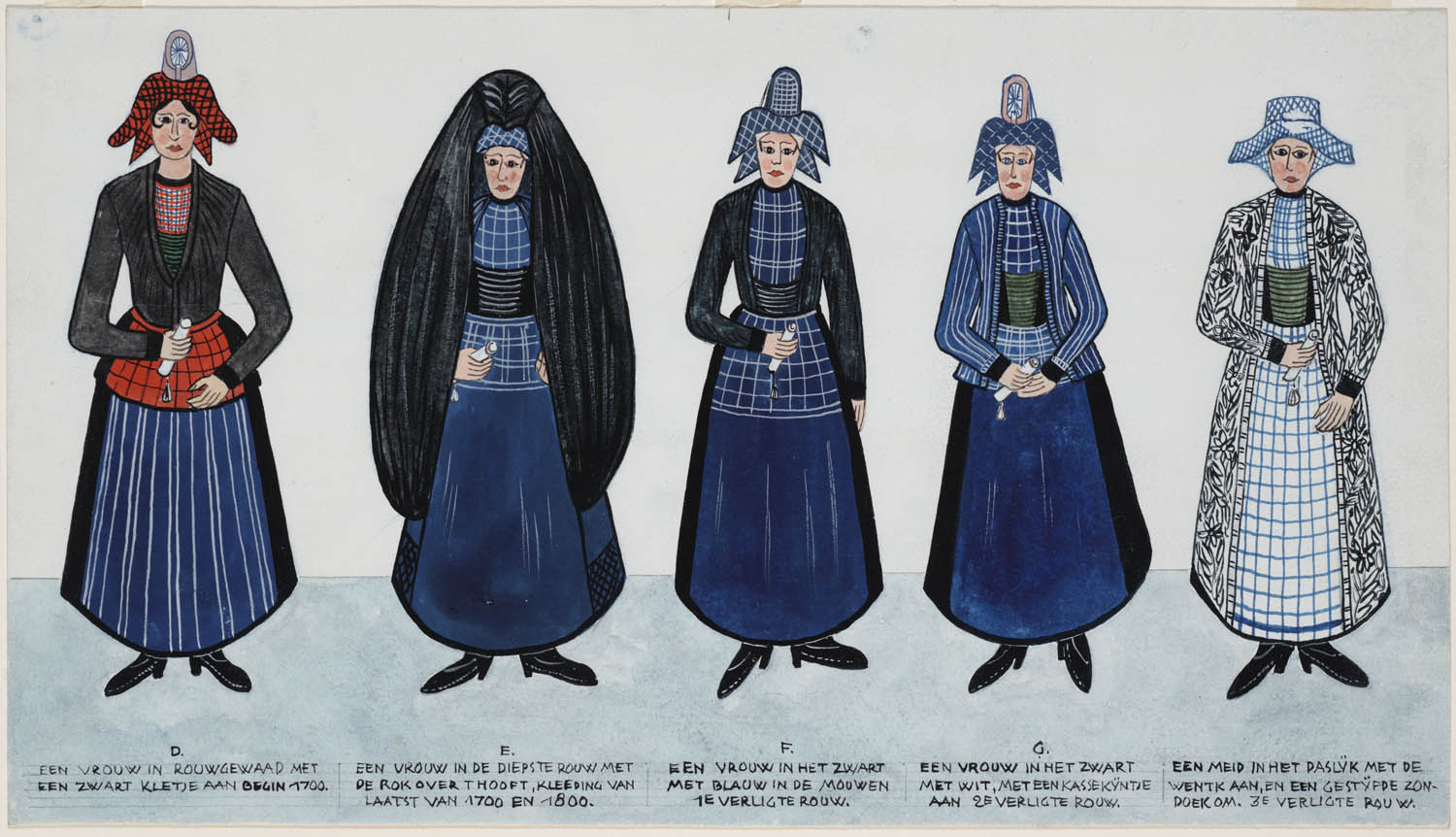 The same patterns and colors would also appear in the homes of people. Hindeloopen furniture is still known for the beautiful flowered paint work. 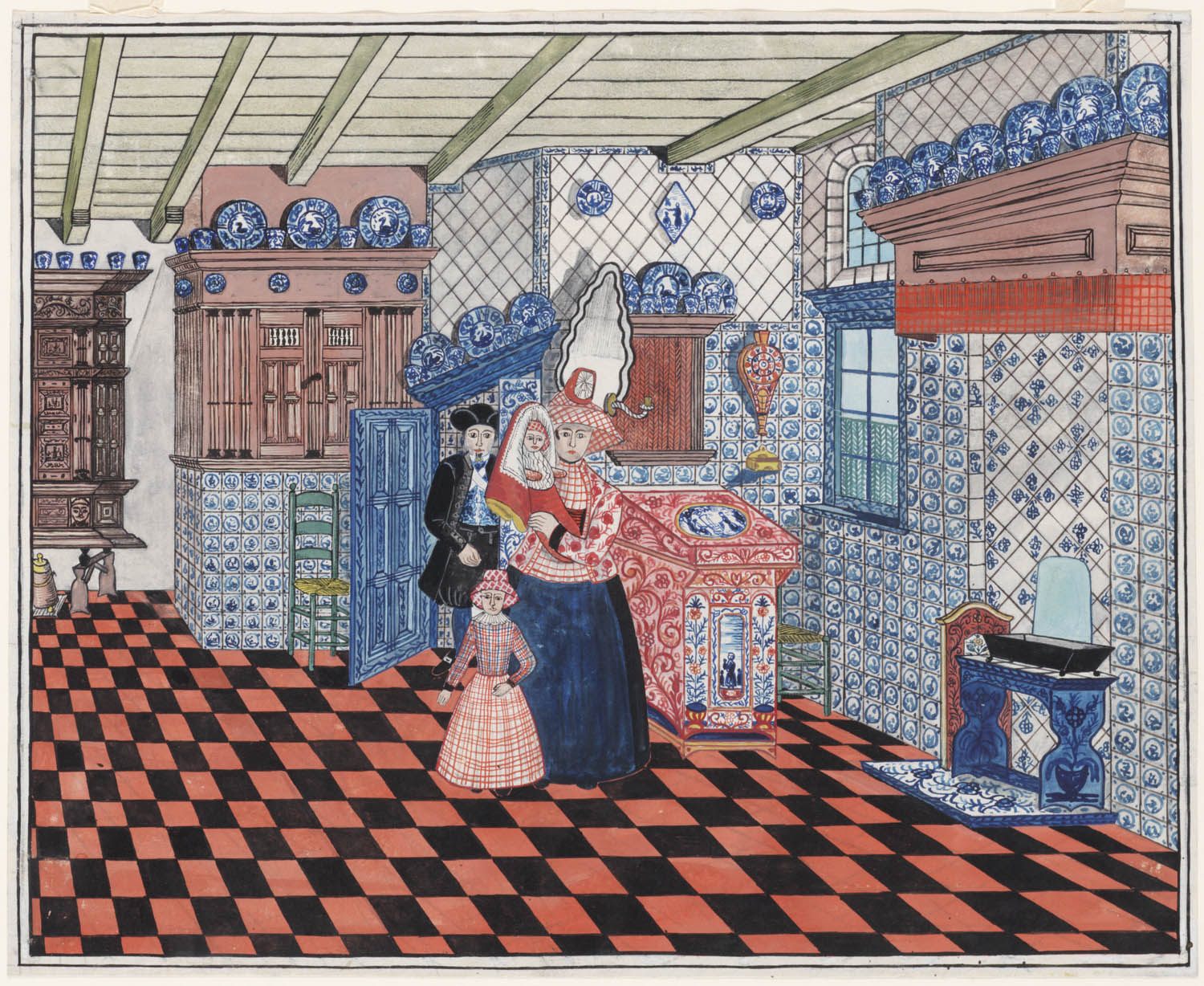